Todays Though > News > Ranking the Orioles’ eight walk-off wins in 2022, from a hit-by-pitch to two-out rallies – Boston Herald
News

Ranking the Orioles’ eight walk-off wins in 2022, from a hit-by-pitch to two-out rallies – Boston Herald 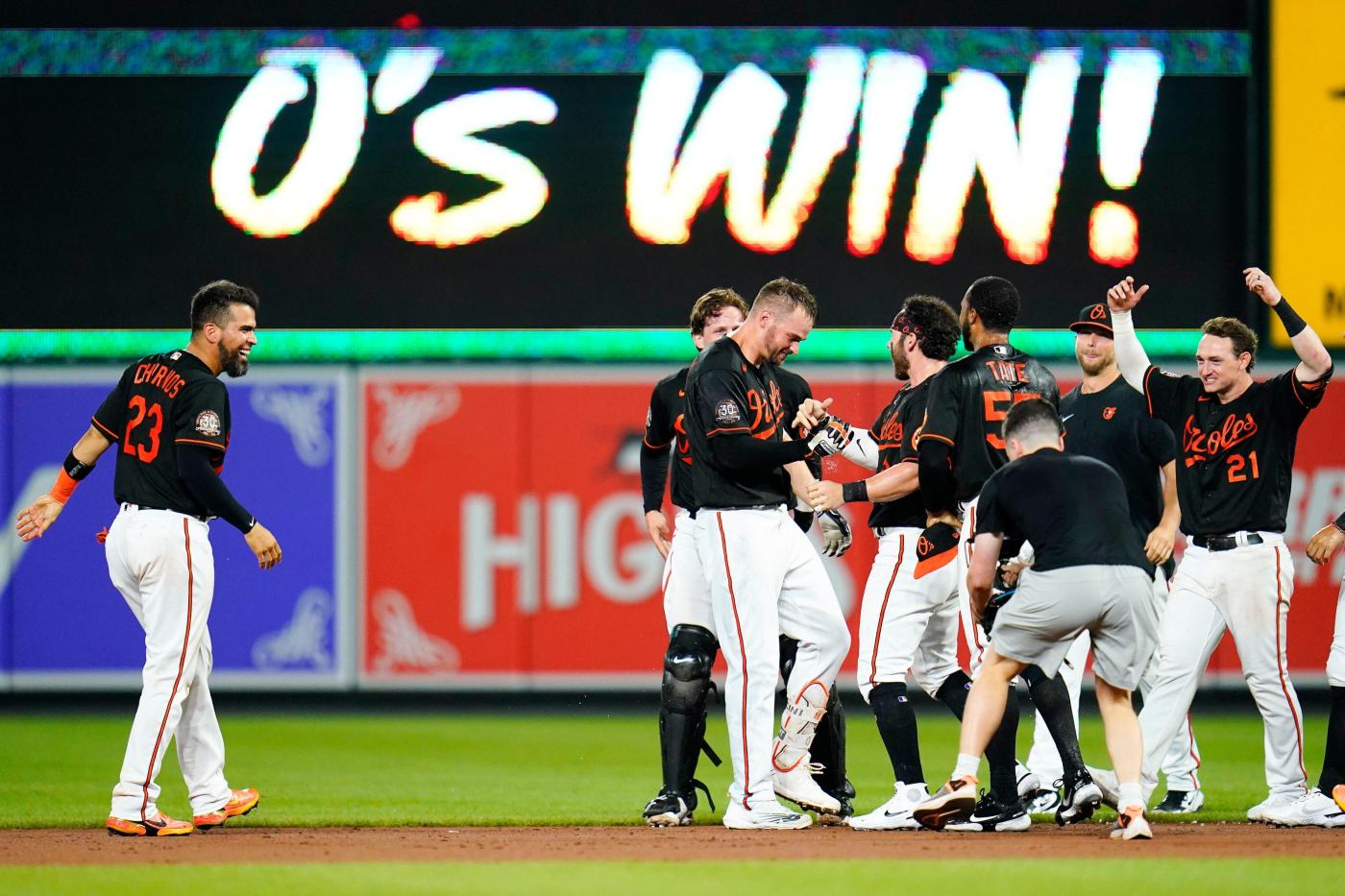 On Brandon Hyde’s right wrist, the Orioles manager wears a WHOOP band. Among other things, the piece of technology measures his heart rate, and as of late, the peaks must be creeping higher and higher as Baltimore finds new ways to come back in games that looked over once upon a time.

The latest example came Friday night, when the Orioles used four straight two-out hits to walk off the Los Angeles Angels, 5-4. They became the fourth team in the last 20 years to win three straight games in which they trailed entering the ninth inning or later. That walk-off win became the Orioles’ third this week alone — the second time this season Baltimore has managed three walk-off wins in a seven-day stretch.

Behind the New York Yankees, the Orioles’ eight walk-off wins is the second most in the major leagues. It’s a testament to what right-hander Tyler Wells said Friday night: “There is no quit in this team.”

That mentality has sent the Orioles surging to six straight wins and a 41-44 record. And while they remain far out of the American League East conversation, a wild-card spot suddenly isn’t so outlandish.

So, how did the Orioles get here?

After another walk-off victory, here’s a ranking of where all eight stack up this season.

After Boston scored in the first inning, Baltimore blanked the Red Sox the remainder of the way. That set up for the game-tying single from Anthony Santander in the eighth inning to eventually send the game to extra innings.

That’s where the rather anticlimactic ending came. There wasn’t a clutch hit or a close play. Instead, Robinson Chirinos laid down a bunt to move Jorge Mateo, the automatic runner at second base, to third. Red Sox reliever Hirokazu Sawamura fielded the bunt, but his throw to third base sailed over his teammate, allowing Mateo to trot home for the walk-off win.

Once the Orioles loaded the bases in the 11th against reliever Clarke Schmidt, the Yankees made a move. They inserted closer Aroldis Chapman to nip the potential game-ending moment in the bud, hoping for another chance to go ahead in the top half of the frame.

The first at-bat worked in New York’s favor, with Chapman fanning Cedric Mullins for the second out. But his control wavered and disappeared to Ramón Urías. Chapman walked Urías, bringing home Austin Hays as the winning run.

The brightest moment wasn’t in the 10th. It was in the ninth, with Adley Rutschman at the plate with two outs, a runner on first and a one-run deficit. The rookie catcher lashed a double off the right field wall to score Ryan McKenna from first base. At the time, Rutschman’s hit was the biggest hit from any Oriole this year, with a 0.508 win probability added, per Baseball Reference.

Then in the 10th, with the bases loaded, reliever Matt Moore hit Mateo with a pitch to end the game. For as monumental as Rutschman’s game-tying double was, there was something left to be desired in a walk-off hit by pitch — but it led to a comical scene in which Hays and Mullins helped a limping Mateo to first base while his teammates gathered around.

“Hit by pitch, we made sure Jorge was OK,” Ryan Mountcastle said. “But that was also fun to be a part of.”

One of the lone smudges on Jorge López’s ledger this year came in the ninth against the Yankees, when he allowed a run-scoring single to DJ LeMahieu.

But after a throwing error allowed Hays to reach base and Trey Mancini singled, Santander strode to the plate. His three-run blast put an emphatic finish on the team’s second walk-off against the Yankees this season. Further more, Santander bested the much-discussed new left field wall in the process, hitting his first career walk-off knock.

“Amazing!” Santander yelled when asked how that blast felt.

In addition to the continual comebacks in this game, the fact it came the night after another walk-off win adds to the mystique — as well as snapping a 15-game losing streak to the Rays. The Orioles forced extra innings by scoring three runs in the seventh, but they fell behind by two runs in the 10th and a run in the 11th.

Both times they tied it, with Santander bringing home two in the 10th with a single and Hays plating another in the 11th with a base hit. That set up for Odor’s at-bat in the 13th, when he got a hold of a cutter and sent it onto the flag court beyond the right field fence.

“That’s a lot of emotions right there,” Odor said. “We don’t give up. We keep battling, keep fighting, and we win the game.”

The lightning and pouring rain added to the scene, with Hays at the plate right as the worst of the storm arrived. He felt the wind pick up, but Hays still muscled a two-run single into left field to tie the game before a 51-minute weather delay paused proceedings.

Once the Rays and Orioles returned to the field for extra innings, Odor’s fielder’s choice scored Rutschman from third for Baltimore’s third walk-off in four days — the first time the Orioles have had such a stretch since 1974, according to Elias Sports Bureau.

One night after walking off the Rangers on the Fourth of July, the Orioles did it again — in even crazier fashion. Despite having a bullpen that has been extremely reliable for much of the season, Baltimore lost leads in the final three frames.

Yet they came back each time, becoming the first team in major league history to pull off a win despite allowing game-tying or go-ahead home runs in the seventh, eighth and ninth innings.

The final knock for the Orioles came from Mullins, whose walk-off double scored McKenna to trigger a Gatorade bath.

It’s not recency bias. The latest walk-off win for the Orioles was perhaps the most electric yet. Down to two outs in the ninth inning while facing a two-run deficit, Odor got things started with a single.

Then Rutschman was down to his final strike before his double found grass in right-center field to score Odor. Still, Mullins and Mancini needed to add hits of their own to complete a wild comeback that included just two hits through six innings before an eruption at the end.

“We had a great keep-the-line-moving attitude,” Hyde said.