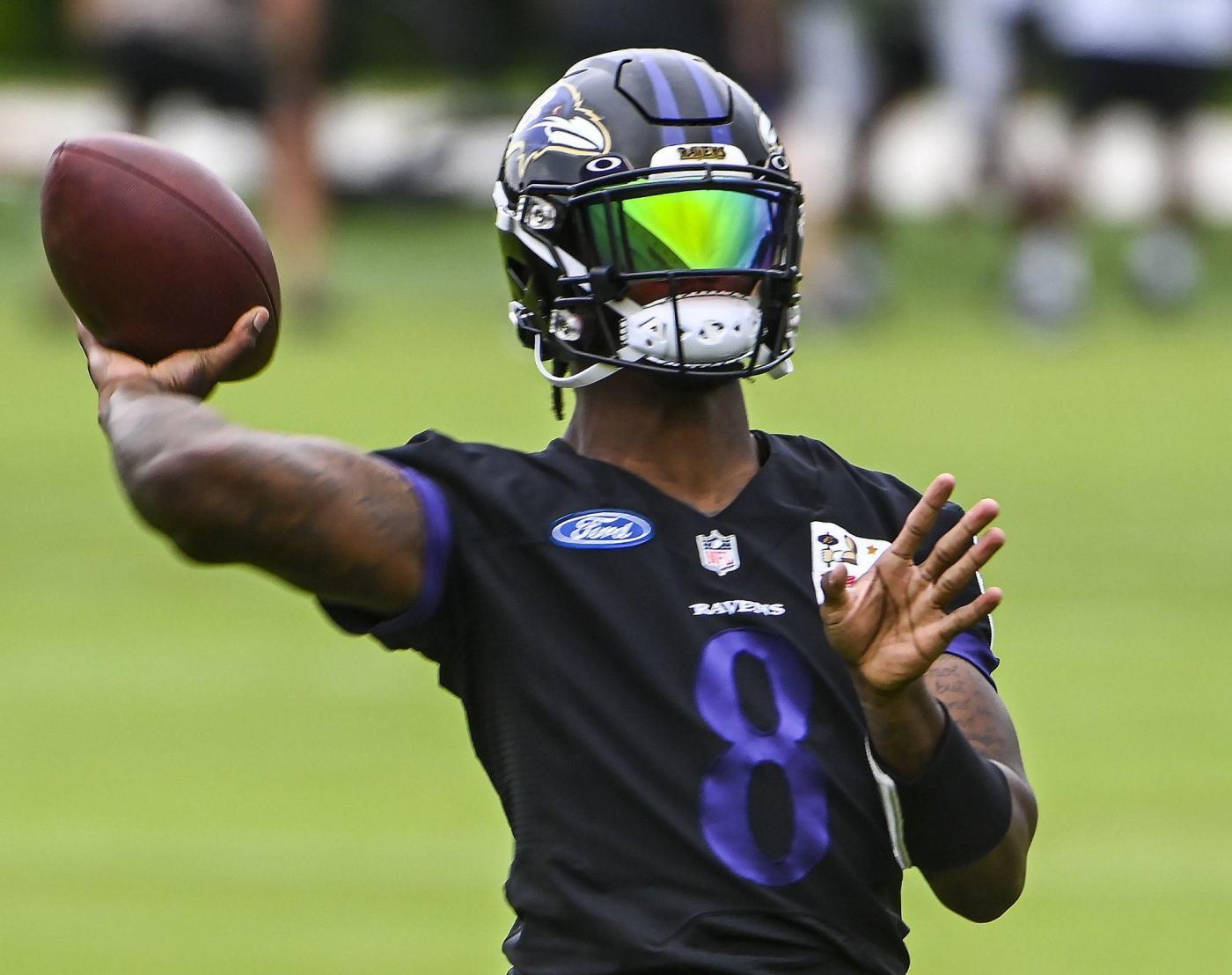 As the Ravens trudged off the practice fields in Owings Mills last month, headed for their summer break, it was easy to imagine what the team could be in January but harder to project who it might have in September.

The Ravens’ top offensive tackle was missing. So were their top two running backs. And one of their starting cornerbacks. And their starting nose tackle, their most productive outside linebacker, their second-round pick — to name just a few injured contributors unavailable at mandatory minicamp.

With training camp less than a month away, the strengths and weaknesses of the Ravens roster are, in some cases, open to interpretation. How much faith can you put in a position still reeling from last year’s catastrophic injury bug? A lot can and will change before Week 1. For now, though, here’s a look at where the groups rank — special teams not included — from weakest to strongest.

The Ravens’ top wide receiver, Rashod Bateman, had a promising but injury-marred rookie year (46 catches for 515 yards in 12 games). Their oldest receiver, 25-year-old James Proche II, has recorded a catch in just six career games. Their most experienced wideout, Devin Duvernay, has never eclipsed 45 receiving yards in a game. Their only other projected contributor, Tylan Wallace, was primarily a special teams contributor as a rookie, finishing with two catches for 23 yards.

After the departure of Marquise “Hollywood” Brown, the Ravens will have plenty of snaps to go around. But entering training camp, this group’s potential far exceeds its production.

On paper, this is the Ravens’ most talented collection of edge rushers in years. In practice, the position’s depth is paper-thin. Tyus Bowser, who led the team with seven sacks last season, is recovering from a torn Achilles tendon and might not be ready by Week 1. Second-round pick David Ojabo tore his Achilles in March and might not play at all this season.

Odafe Oweh, who underwent shoulder surgery after an impressive rookie year, was limited in offseason workouts but should be full-go in training camp. Same goes for Daelin Hayes, who barely played last season after a strong offseason. But with the sudden death of Jaylon Ferguson, and with the Ravens yet to add a big-name free agent, defensive coordinator Mike Macdonald will have to hope for quick recoveries and a healthy preseason. Even with a promising core, the group’s margin for error is slim.

Josh Bynes and Patrick Queen were solid run defenders in their first year together, but neither saw regular action on obvious passing downs. They were also nonfactors in the Ravens’ pass rush, finishing with a combined four sacks and nine pressures. Can first-year inside linebackers coach Zachary Orr help take their partnership to another level?

With the Detroit Lions signing Chris Board this offseason, the Ravens’ depth at the position is somewhat tenuous. Malik Harrison entered offseason workouts as a candidate to cross-train at outside linebacker, though he lined up primarily inside. Kristian Welch has played sparingly on defense over his first two years in Baltimore. Behind them are a handful of undrafted free agents, including Navy’s Diego Fagot.

By year’s end, the Ravens could have one of the NFL’s best running back rooms. But if the season started in August, their top two options would likely be Mike Davis, a well-traveled veteran who averaged 3.6 yards per carry last season, and Tyler Badie, an undersized rookie whom the Ravens drafted in the sixth round.

Davis and Badie, along with a healthy Justice Hill, can contribute this year. But for as long as J.K. Dobbins and Gus Edwards are sidelined by knee rehabilitations, the Ravens’ ground game will be suboptimal. Dobbins led the NFL in rushing as a rookie in 2020 (6 yards per carry) and showed growth as a receiver last summer. Edwards, one of the NFL’s best short-yardage backs, averaged at least 5 yards per carry in each of his first three seasons in Baltimore.

The right side of the Ravens’ line should keep quarterback Lamar Jackson happy, and upright. At center is rookie Tyler Linderbaum, whose athletic ability opens up offensive coordinator Greg Roman’s playbook. Kevin Zeitler was one of the NFL’s best right guards in his first year in Baltimore. Right tackle Morgan Moses is a reliable pass protector and well suited for the Ravens’ hard-driving rushing attack.

On the left side, though, there’s uncertainty. If Ronnie Stanley’s ankle problems persist, the Ravens could turn to the versatile Patrick Mekari. Ja’Wuan James is another option, though his injury history and inexperience at left tackle could be difficult to overcome. At left guard, the Ravens have a handful of young options — Tyre Phillips, Ben Cleveland and Ben Powers — but no clear front-runner. Rookie Daniel Faalele needs more time before he’s ready to contribute.

Running against the Ravens’ defensive front won’t be easy. Michael Pierce should be an upgrade at nose tackle over Brandon Williams. Calais Campbell graded out as one of Pro Football Focus’ top run-stuffing linemen last season. Justin Madubuike is quick enough to beat zone-blocking schemes and strong enough to take on double teams. Brent Urban and Broderick Washington are more-than-capable reserves.

The challenge for the line, once again, will be generating a pass rush. Rookie Travis Jones has intriguing potential, Madubuike has shown flashes of brilliance and Campbell is determined to reach 100 career sacks. But if the Ravens’ edge rushers struggle, an interior push could be hard to find.

The Ravens entered training camp last year with enviable depth at cornerback, only to watch it crumble over the next few months. This year, they’re counting on similar quality and better injury luck. Marlon Humphrey has already returned from a season-ending pectoral injury and should bounce back from a disappointing 2021. Marcus Peters, whose ongoing recovery from a torn ACL has impressed Ravens officials, is expected to rejoin him at some point.

Whoever’s out there should have plenty of help. Brandon Stephens lined up everywhere in the secondary as a rookie and should take another step forward in 2022. Kyle Fuller, a Baltimore native, has a history of takeaways. Rookies Jalyn Armour-Davis and Damarion “Pepe” Williams have both impressed and Kevon Seymour played nearly 250 defensive snaps last season.

The Ravens have a Pro Bowl fullback in Patrick Ricard, and it’s fair to wonder just where they’ll need him this season. Such is the Ravens’ depth at tight end. Mark Andrews broke the Ravens’ single-season receiving record last season (107 catches for 1,361 yards) and emerged as one of the NFL’s top playmakers. Nick Boyle, when healthy, gives the offense a versatile blocker who can present as a big target over the middle. Ricard’s game has become more well-rounded every season in Baltimore.

They’ll all have young talents pushing them. Rookies Isaiah Likely and Charlie Kolar both flashed in offseason workouts, and Josh Oliver is a solid reserve. Andrews is irreplaceable, but the Ravens have a well-stocked group behind him.

As long as Jackson’s under contract and healthy, the Ravens will feel good about their starting quarterback. He impressed at mandatory minicamp and pledged to get together with his receivers during the team’s offseason hiatus. That’s all you can ask for from a potential NFL Most Valuable Player in July — well, maybe some progress in contract negotiations, too.

Tyler Huntley didn’t need long to prove his ability as a backup last year. He might not be good enough to lead the Ravens to victory, but he can be trusted not to throw a game away.

When the Ravens’ options for their two starting safeties are a playmaking center fielder (Marcus Williams), a respected and reliable signal-caller (Chuck Clark) and a first-round pick who might ultimately be better than both (Kyle Hamilton), maybe it’s time to consider starting three. Even if Clark is traded away before the season opener, the secondary would still have two safeties whose range in coverage and ability in run defense make them essentially interchangeable.

Their backups aren’t bad, either. Tony Jefferson has seemingly turned around his career in his return to Baltimore, and he picked off two of Jackson’s passes on the first day of minicamp. Geno Stone has starting experience and played over 20% of the defense’s snaps last season. A foot injury ended Ar’Darius Washington’s quiet rookie season, but he was promising enough to make the Ravens’ initial 53-man roster.