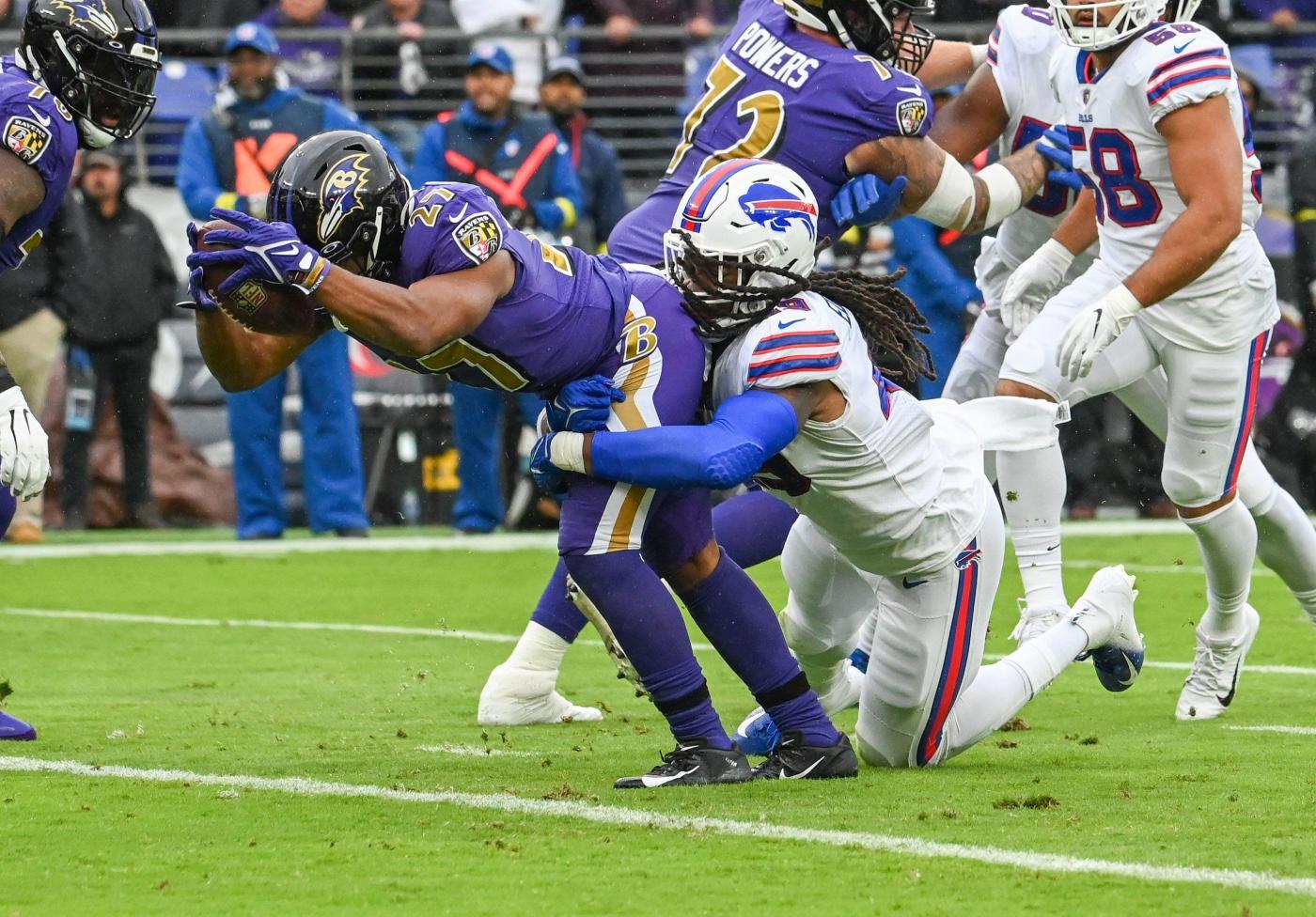 In a matchup of star quarterbacks, Josh Allen led the Buffalo Bills to a come-from-behind 23-20 win with a decisive final drive, handing the Ravens another loss after a second straight second-half collapse in Baltimore.

Kicker Tyler Bass’ 21-yard field goal as time expired, the last action of a 12-play, 77-yard drive that ended the game, concluded Buffalo’s 20-0 run inside M&T Bank Stadium. The Ravens have now lost five straight at home, a franchise record. Next up is a test against the visiting Cincinnati Bengals, the defending AFC North champions.

With a strong second half, Allen outplayed quarterback Lamar Jackson, the early favorite for NFL Most Valuable Player honors. Allen finished 19-for-36 for 213 yards, a touchdown and an interception, as well as 11 carries for 70 yards. He also called for and received a roughing-the-passer penalty on the Bills’ go-ahead drive after a hit by cornerback Brandon Stephens.

Jackson finished 20-for-29 for 144 yards, a touchdown and two crucial interceptions, and again led the team with 11 carries for 73 yards. The offense struggled overall, finishing with 296 yards and 4.6 yards per play.

Two weeks after the Ravens (2-2) had their home opener ruined by a fourth-quarter collapse against the Miami Dolphins, they watched the Bills (3-1) become the bullies once again. Trailing 20-3 with 3:39 remaining in the second quarter, Buffalo went on a 17-0 run over the next 15-plus minutes. Allen’s 11-yard touchdown run on a naked bootleg evened the score, which held until the game’s final minutes.

With wide receiver Rashod Bateman struggling with drops and an apparent injury, and with the Bills mostly snuffing out the Ravens’ rushing attack, their offense struggled after a fast start. The Ravens didn’t cross midfield in the third quarter, and Jackson had a pass picked off by safety Jordan Poyer after it was deflected high at the line of scrimmage. Penalties were a problem, too, as the team finished with nine for 70 yards total.

But late in the fourth quarter, the Ravens patched together enough first downs to get within range of another lead. A 9-yard completion to wide receiver Devin Duvernay moved the Ravens to the 1. A carry by J.K. Dobbins bumped them back to the 4. After a short third-down scramble by Jackson, the Ravens kept kicker Justin Tucker on the sideline. They left with nothing after Jackson’s pass to Duvernay, once wide open in the corner of the end zone, was intercepted by Poyer again.

Hours earlier, the Ravens hadn’t needed long to go ahead. The Bills, who had opened their past eight games with a touchdown on their opening drive, started Sunday’s with a near-interception. Two plays after cornerback Marcus Peters almost secured a pick, cornerback Marlon Humphrey more than made up for it.

Allen’s third-down pass was deflected at the line of scrimmage by defensive lineman Calais Campbell and then skidded off tight end Dawson Knox’s hands and into Humphrey’s waiting grasp. His return and a Bills penalty set the Ravens up at Buffalo’s 4-yard line, and Dobbins took a shovel pass from Jackson for a 1-yard touchdown catch two plays later.

After the Bills answered with a field-goal drive, the Ravens took a while to respond. But at the end of a 15-play, 81-yard drive that drained over nine minutes off the game clock, Dobbins rumbled in for a 4-yard score. He became the second player in franchise history to score both a rushing and receiving touchdown in one quarter, joining Ray Rice in the second quarter against the Saints in 2010, according to ESPN Stats and Info.

The Ravens’ 14-3 lead grew from there. After outside linebacker Odafe Oweh forced a fumble in Bills territory, the Ravens recovered and turned the short field into a 42-yard field goal. After a third-and-1 stop on the Bills’ subsequent drive forced a three-and-out, the Ravens got into range for Tucker, who made a 51-yard field goal.

On Buffalo’s lone touchdown drive, inside linebacker Patrick Queen dropped a would-be interception after a deflected ball fell right to his chest. Allen’s 4-yard pass to wide receiver Isaiah McKenzie with nine seconds remaining in the first half cut the Ravens’ lead to 20-10.