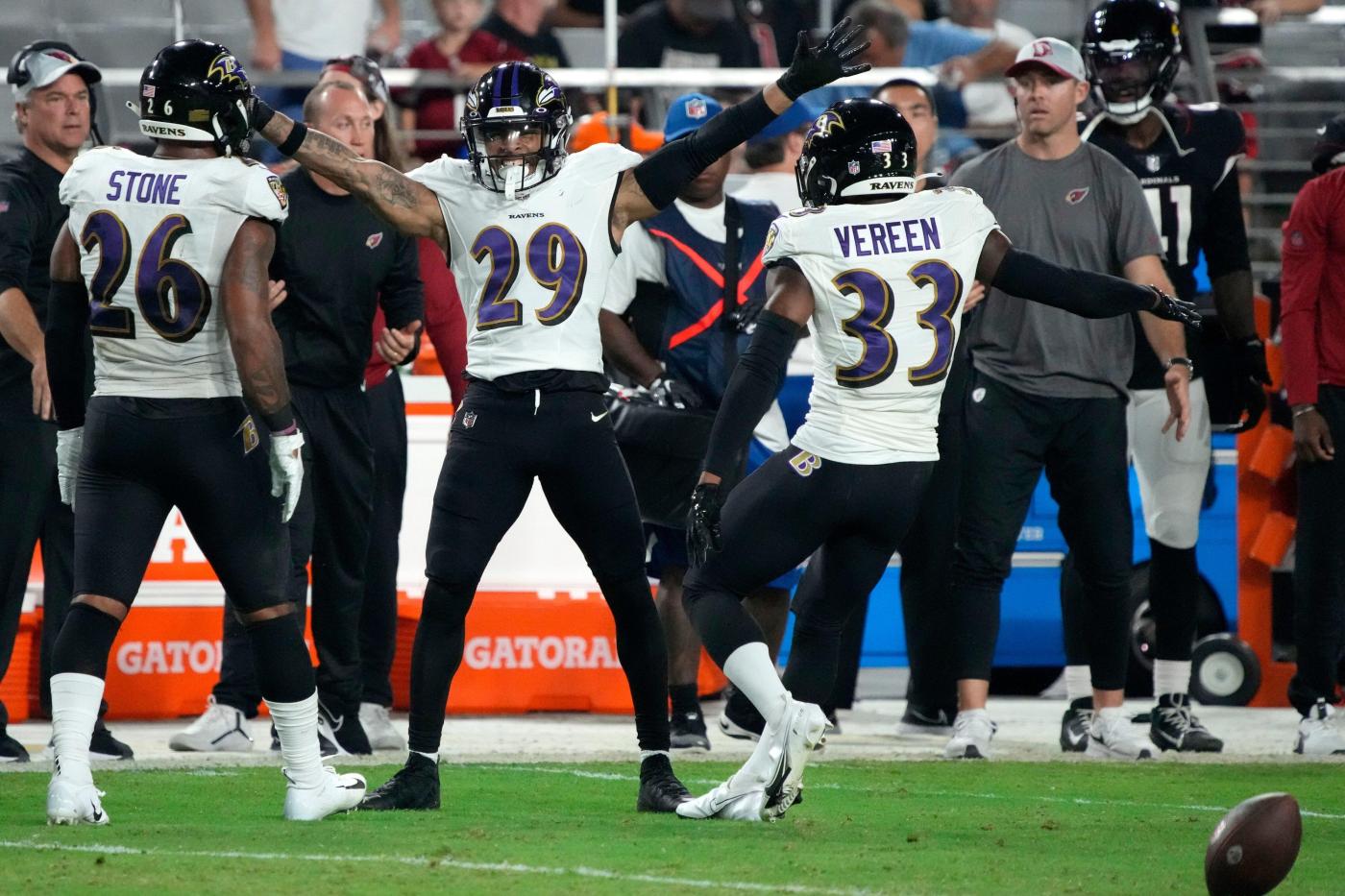 The Ravens flew out to Arizona ahead of their preseason game Sunday night a few days early, hoping to make the most of their time together as a team. They practiced in the heat. They hung out at their hotel pool. They played volleyball. They watched their rookies sing at a team dinner.

And then, in extending their preseason winning streak to an NFL-record 22 games, they gutted out a victory in prime time, an ending the whole team could celebrate. The Ravens’ 24-17 win over the Cardinals at State Farm Stadium was as much a testament to the first-half excellence of tight end Isaiah Likely and quarterback Tyler Huntley as it was to their clutch play late in all three phases.

Before rookie running back Tyler Badie ran out the clock to extend the longest preseason winning streak by any NFL team confirmed by the Elias Sports Bureau since 1995, the Ravens got a booming 56-yard punt from rookie Jordan Stout to pin Arizona deep. Then they got a couple of sacks from their defensive line and a fourth-down pass breakup from safety Ar’Darius Washington to end Arizona’s hopes of a comeback from a 24-3 deficit.

“We were at the last guys,” coach John Harbaugh said. “We weren’t putting subs in there. Those guys were just playing the whole time. So proud of the way they did it, and now we move on.”

The Ravens will close out their preseason schedule Saturday against the visiting Washington Commanders. Here’s a look at the risers and fallers from Sunday’s game.

Mark Andrews didn’t have a preseason like this. Not many tight ends ever have a preseason like this. The fourth-round pick continued his breakout August with a performance so dominant it seemed inconceivable that Likely was bullying Sun Belt Conference defenders just over a year ago. Likely finished the first half with eight catches on eight targets for 100 yards and a touchdown. The Coastal Carolina product seemed to get open as easily as he slipped tackles; 55 of his yards came after the catch. Over two games, Likely has caught everything thrown his way — literally. He has 12 catches on 12 targets for 144 yards and a touchdown, good for a 144.4 passer rating when targeted.

“He gets open,” Huntley said. “He knows what’s going on around him. He knows the plays. And like Coach [Harbaugh] said, when he makes a mistake, he’s not going to make that same mistake again. He’s going to try to get better at everything. And it just shows in his work and his production. He catches the ball and he runs after the catch.”

Another efficient performance from Lamar Jackson’s backup, whose star rose (as much as any second-stringer’s can) in prime time. Despite playing with the Ravens’ reserve receiving corps, Huntley finished 13-for-14 for 129 yards and a touchdown (128.9 passer rating). He improvised when he had to, evading pressure and extending drives. He also fed the hot hand, connecting with Likely eight times; no other Ravens receiver was targeted even twice in the first half. Over two preseason games, Huntley is 29-for-32 for 238 yards and two touchdowns (118.4 rating).

“I think the timing, the precision, really continues to go in that trajectory that you want to see,” Harbaugh said. “We’ve seen that in both preseason games. The way he’s operating the offense, his communication has been really good. He’s getting out and scrambling and making plays with his feet and keeping the defense honest that way. … He’s a competitor, and you love all the things about him, but probably that the most.”

The third-round pick continues to flash, even when he runs afoul of the rulebook. On the first drop-back of Arizona’s third drive, the Connecticut product had such a clean pass-rush win that his straight-ahead surge for quarterback Trace McSorley delivered a glancing helmet-to-helmet blow in the Cardinals’ end zone. On the third drop-back, he appeared to get another pressure and force an incompletion. On the fourth and final drop-back, another pressure, another incompletion. Jones opened his preseason with his first sack, and if his injured knee is healthy, he has enough talent to end his rookie year with a couple more.

Sometimes you’re good, and sometimes you’re lucky. On the fourth-round pick’s first punt Sunday, he was good, booming a 50-yard punt that rolled inside the 10, then the 5, until cornerback Kevon Seymour downed it at the 3. On his second punt, he was good, and also a little lucky. After hitting a 46-yard punt, the Penn State product watched Cardinals returner Greg Dortch signal for a fair catch at the 3-yard line. On his final punt, late in the fourth quarter, he boomed a 58-yard punt out of bounds. Stout, who added a successful extra-point attempt, had an “outstanding” preseason debut against the Tennessee Titans, special teams coordinator Chris Horton said. His follow-up might’ve been even better.

“Jordan Stout bombed a couple,” Harbaugh said. “We had one where I thought the gunner got held and tackled on the sideline. Just didn’t get called. And it didn’t matter because he put it about 60 [yards] right out of bounds. So that was nice to see.”

About the only thing that didn’t go right for the fourth-round pick was Kevin Burkhardt’s pronunciation of his nickname. “Peppy,” as the Fox play-by-play man appeared to call him, continued his active preseason with another high-volume game. The Houston product had a nice form tackle in the first quarter to force a fourth-down pass that cornerback Kyle Fuller intercepted. In the third quarter, he jumped a pass from McSorley for an interception that he returned 29 yards. Williams also had a 12-yard punt return, continuing to build on his candidacy if All-Pro returner Devin Duvernay’s ever more needed on offense.

“Pepe just does it every day,” Harbaugh said. “He does it in practice. He does it in games. He doesn’t get flustered at all.”

Harrison finished with four tackles on defense and added a fifth on special teams. His hard hitting stood out on a night when the Ravens held the Cardinals to just 2.6 yards per carry. Late in the second quarter, Harrison helped smack McSorley short of the goal line on a scramble. One play later, he came unblocked off the left side of Arizona’s line to drop running back Eno Benjamin for a 3-yard loss. After a misfire on third down, the Cardinals had to settle for a 21-yard field goal just before halftime. Harrison’s ability in the open field remains a question mark, but the third-year backup can be a punishing run defender.

Early in training camp, offensive coordinator Greg Roman was asked how he evaluates his offensive line play. “First of all, it’s communication,” he said. “The offensive line is five people acting as one, and being able to communicate, adjust, make the proper adjustments. One wrong adjustment can blow up a play.” Synchronicity was a problem for Phillips. Lined up at guard, he had two penalties in a one-minute span in the second quarter: one for a false start and one for being illegally downfield on a run-pass-option throw. Lined up at tackle, he had another false start in the third quarter. That’s not the best way to wrestle the starting job away from Ben Powers.

Stephens missed time in training camp with a soft-tissue injury, and perhaps he’s still working his way back to full strength. Working primarily against Cardinals reserve wide receiver Andy Isabella, the second-year defensive back wasn’t at his best. On the game’s first play from scrimmage, he was flagged for unnecessary roughness on Dortch after giving a late push out of bounds. A few plays later, he allowed a first-down completion to Isabella on third-and-long. In the third quarter, the speedy Isabella got a step on Stephens on a vertical route, leading to a 37-yard pass-interference penalty. His coverage improved later, but on special teams, he was pancaked on Jonathan Ward’s 48-yard kick return.

Another week, another jumbled mess to sort out. There were plenty of positives to celebrate: Starter Mike Davis (six carries for 18 yards) moved the pile on a couple of downhill runs. Rookie Tyler Badie (12 carries for 34 yards) showed impressive acceleration and soft hands on a 3-yard touchdown catch. Justice Hill (five carries for 5 yards) spun out of a tackle attempt, as he did in the opener. Nate McCrary had one carry for 9 yards before being sidelined with a knee injury. But who looks the most ready to start in Week 1 if J.K. Dobbins is unavailable? Hard to say. Maybe the preseason finale will offer a revelation.

With starting wide receivers Rashod Bateman and Duvernay sitting out the game, and James Proche II (soft tissue) and Tylan Wallace (knee) still on the mend, the Ravens’ on-the-bubble wideouts entered Sunday’s game knowing they’d have a big stage. But with Likely dominating in the first half, the team’s top candidates rarely saw the ball.

Undrafted rookie Shemar Bridges, who had four catches for a game-high 62 yards against Tennessee, had one catch for 8 yards on three targets against Arizona. Practice squad wide receivers Jaylon Moore and Binjimen Victor combined for no targets on a combined 22 first-half routes run, according to Pro Football Focus, and ended the game without a target. Undrafted rookie Makai Polk, another standout against the Titans, had just one catch, an ad-libbed 19-yarder from Huntley. The Ravens’ most productive wide receiver was Raleigh Webb (two catches for 46 yards), whom Fox confused for Stout — they both wear No. 11 — on its touchdown graphics.