Todays Though > News > Ravens nose tackle Michael Pierce is still a bear to block, but he aims to be more in his second tenure with team – Boston Herald
News

Ravens nose tackle Michael Pierce is still a bear to block, but he aims to be more in his second tenure with team – Boston Herald 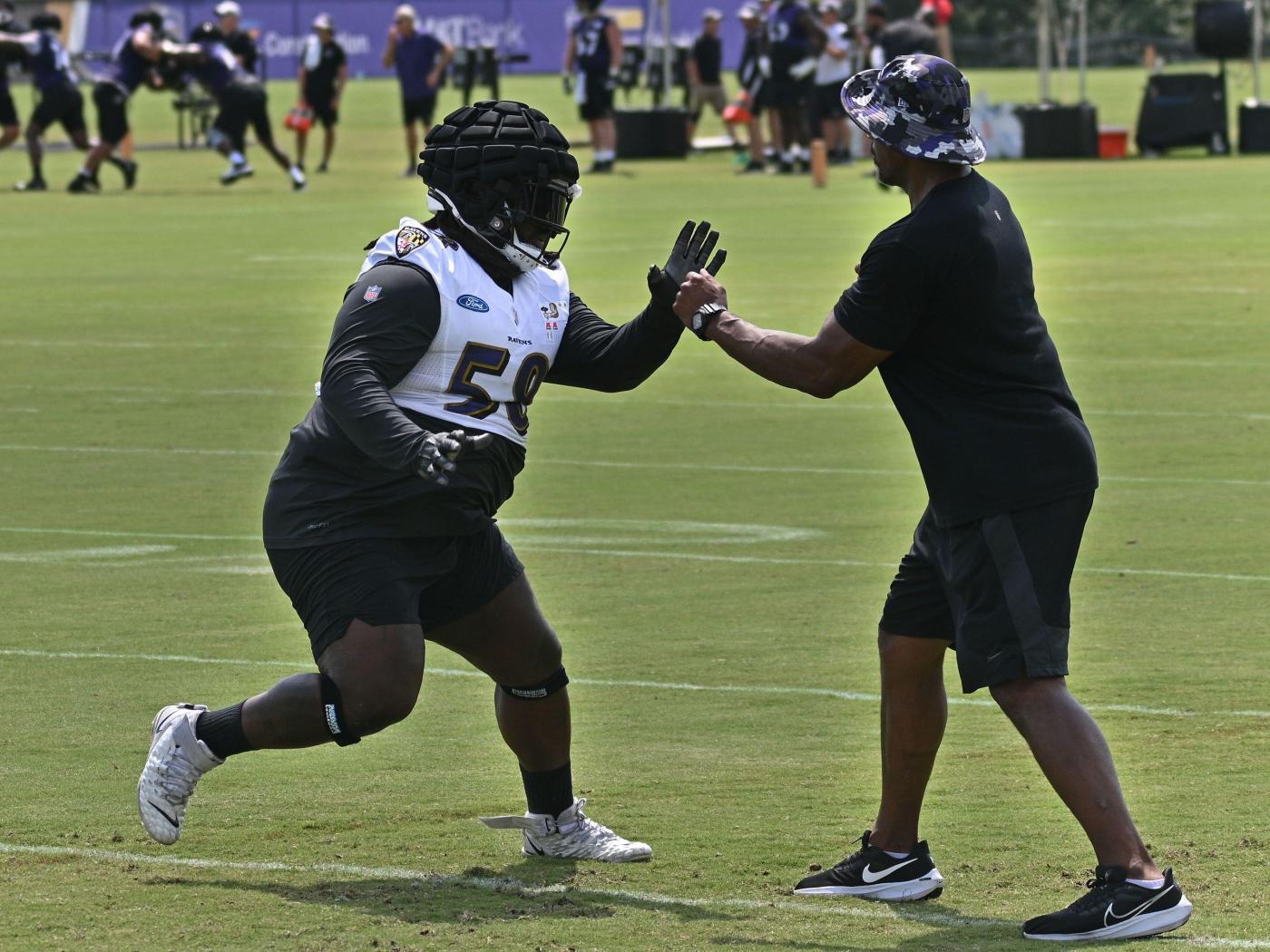 Ravens center Tyler Linderbaum stumbled backward, his equilibrium destroyed by the mass of muscle and gut boring directly into him.

It was just one rep during the first full-pads practice of training camp, but a lesson nonetheless in the storm surge created by a legitimate NFL nose tackle, Michael Pierce.

The Ravens brought Pierce back to Baltimore knowing he would produce such collisions. They saw plenty from 2016 to 2019 as he grew from an undrafted free agent to a key run-stuffer on two Ravens playoff teams.

“Michael Pierce is a mountain of a man,” defensive line coach Anthony Weaver said. “The thing about him, when he puts his hands on you, you can’t help but feel it. Even when I’m doing individual drills, I feel like I’m fighting a bear.”

But Pierce and his coaches expect more than the bear this time around. As he nears his 30th birthday, Pierce wants to be a more productive pass rusher, a steadier presence in the lineup and a more trusted leader in the locker room.

“I’ve still got a lot to prove, I believe,” the ever-jovial nose tackle said after a balmy practice Tuesday.

Coach John Harbaugh agreed: “I think he has room to build. … In the big picture of his career, I know he’s not satisfied with where he’s at and how he’s played the last couple years. He’s been good but probably not to his expectations. I believe he has a statement to make.”

Even as the Ravens’ season fell apart over the last six weeks of last season, their run defense rarely faltered. But their No. 1 ranking in the category did not stop general manager Eric DeCosta from reshuffling in the offseason. The Ravens made no attempt to bring back starting nose tackle Brandon Williams and waved a curt goodbye to defensive tackle Derek Wolfe, who retired last month. They used a third-round pick on Travis Jones, an interior sledgehammer from Connecticut. They brought back versatile run stopper Brent Urban, who last played for the team in 2018. And in perhaps their most unexpected move, they committed $16.5 million, $6.75 million of it guaranteed, to reunite with Pierce, who played just eight games over two seasons with the Minnesota Vikings.

“I think honestly, this is the most talented D-line I’ve been a part of, on the interior,” said Urban, an eight-year veteran. “Top to bottom, there’s really no drop-off. There’s so many good young players, and it also has a good balance of leadership as well. It’s a really talented group and one that has all different shapes and sizes. We can kind of attack you however you want to play offense.”

When Pierce departed after the 2019 season, it was not a matter of the Ravens not wanting the former undrafted free agent. Rather, they did not want to match the $27 million deal from the Vikings when they already had substantial dollars committed to Williams.

For Pierce, life away from Baltimore was not always rosy. He opted out of the 2020 season because of coronavirus concerns, then missed nine games last year because of a torn triceps (he said he also tore a calf muscle). In the eight games he did play, he made 20 tackles and a career-high three sacks, but Minnesota released him in March.

Pierce did not need long to think when the Ravens came calling.

“It’s like a homecoming for me,” he said, listing off his close relationships with everyone from teammates to coaches to individual members of the cafeteria staff.

Worries about Pierce’s durability resurfaced when he did not attend mandatory minicamp in June. This was a player whom Harbaugh had banished from the field in summer 2019 because he was too overweight “to practice from a safety standpoint.” But Pierce and Harbaugh said he was absent from minicamp because of a family matter that Pierce declined to elaborate on.

When Pierce arrived for training camp, he passed the team’s conditioning test without issue, and he has appeared quick and fit, even on the hottest days. “This is a complete joy for me,” he said. “It’s time for me just to have a complete season, healthy and with a more well-rounded game. I’m looking forward to this like never before.”

Weaver said he had no concerns about what Pierce would deliver upon arrival. He’s been a fan since a former teammate coached Pierce as a linebacker at Tulane. He grinned, noting that Pierce “never lost those linebacker feet” despite adding about 100 pounds to his stout frame.

Pierce will anchor the defensive line along with the team’s top interior force from last season, Calais Campbell, and third-year tackle Justin Madubuike. Though he’s a veteran now, he said he’s eager to learn from Campbell at the same time he helps Jones acclimate.

Pierce gushed when asked his initial impressions of the rookie: “He’s special, man, physically gifted. For a big dude, he can really, really move. They don’t make too many like him. He’s going to be nice, man. As soon as we get that technique down in the run game, he’s going to be special.”

Given Pierce’s pass-rush production last year and Jones’ potential in that area, might the Ravens finally expect more sacks from their interior linemen, who have traditionally emphasized run stuffing?

“I’m certainly pleased with the guys we’ve added, and it’s definitely an area of focus for us,” Weaver said. “We want to lead the league in quarterback harassment, whether that’s pressures, hits, hurries — we want to make sure we’re doing whatever we can to harass that guy in order to help the guys behind us.”

No matter how many sacks Pierce records, Weaver said he will help the team make quarterbacks uncomfortable: “Some people think it’s just run defense, but the effect he has on the middle of the pocket, making that quarterback throw out of a well, is going to help our edges as well.”

Pierce said he needed to change his mentality to unlock his sack production, listing pass rush and leadership as the areas where he grew most in his time away from Baltimore.

“I just was here to be a run-stopper,” he said, reflecting on his earlier tenure. “But the league is changing. I’m the last of a dying breed, I like to say. But I think I’m getting better at the pass rush. … It’s really just time and repetition for me.”