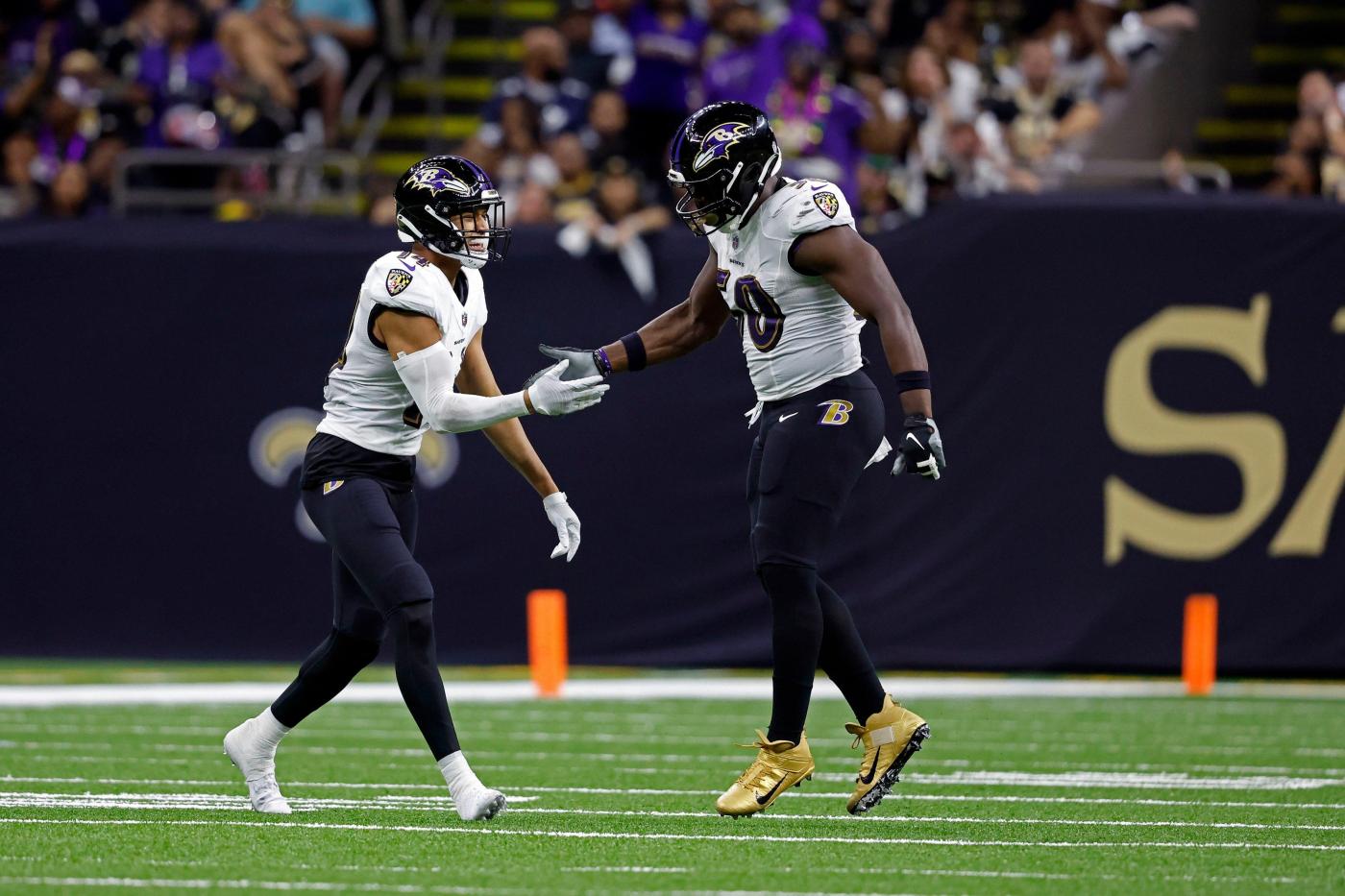 Justin Houston said in July that he had “too much juice” to retire. This season — and especially Monday night — he’s proved that.

The 33-year-old linebacker notched 2 1/2 sacks and a late interception, becoming the first Raven to post three straight multi-sack games. Sparked by his big plays, the Ravens’ defense terrorized the New Orleans Saints as Baltimore took home a 27-13 victory to improve to 6-3 heading into their bye week.

But before he decided he had an abundance of “juice,” Houston considered retirement this offseason. He and his wife went on vacation for a few days, he said, and he turned off his phone and prayed during that time. The result: He opted to come back for a second year in Baltimore, his 12th NFL season.

Few pass-rushers are able to play a dozen years effectively, but Houston is continuing to enjoy success, and his 8 1/2 sacks this year (despite missing three games with a groin injury) are tied for second in the NFL. He’s on pace for the second-most sacks of his career, behind only his league-leading 22 in 2014.

He’s amazed even himself.

“The things that are happening on the field, I can’t even explain,” he said. “I don’t even know what I’m doing some of these times.”

He played 65% of Baltimore’s defensive snaps Monday and pressured the quarterback five times, per NFL’s Next Gen Stats.

In addition to his sacks, Houston made a pivotal play in the fourth quarter when, after Brent Urban deflected a pass from Saints quarterback Andy Dalton, Houston snagged it out of the air for an interception. Afterward, he handed the ball to his son, who sat in the front row of the Caesars Superdome, wearing his father’s No. 50 jersey.

Houston’s pick gave the Ravens possession in the red zone and set up a final touchdown that all but sealed the game’s fate.

As ESPN interviewed Lamar Jackson after the game, the star quarterback embraced Houston.

“He did his thing tonight,” Jackson said of Houston. “Hall of Famer, right there.”

Houston has already earned himself a $1 million bonus thus far this season by surpassing five total sacks (a $500,000 incentive) and, now, 7 1/2 sacks (another $500,000), according to Ravens salary cap expert Brian McFarland of Russell Street Report. With 1 1/2 more sacks, he’ll reach double digits and another $500,000, and he’ll receive the same amount should he make the Pro Bowl.

Second-year linebacker Odafe Oweh previously dubbed Houston, “Yoda,” and he later revised that nickname to “Sensei.” After Monday, he was once again impressed.

“[Houston’s] a beast, man,” said 36-year-old Calais Campbell, another ageless stalwart of the Baltimore defense. “What he’s been doing the last few weeks has been special. Incredible. And I tell him all the time, I’m happy to be his teammate. He’s a great guy to play football with.”

Houston and Campbell both wished the Ravens had “pitched a goose egg” — that is, held the Saints to zero points — but Baltimore nevertheless looked strong in holding the Saints to just 243 total yards.

The Ravens have a bye week in Week 10 but will seek to build upon their three-game winning streak afterward. Meanwhile, Houston will seek to continue his streak of sacks; from the looks of it, he has plenty of “juice” left.