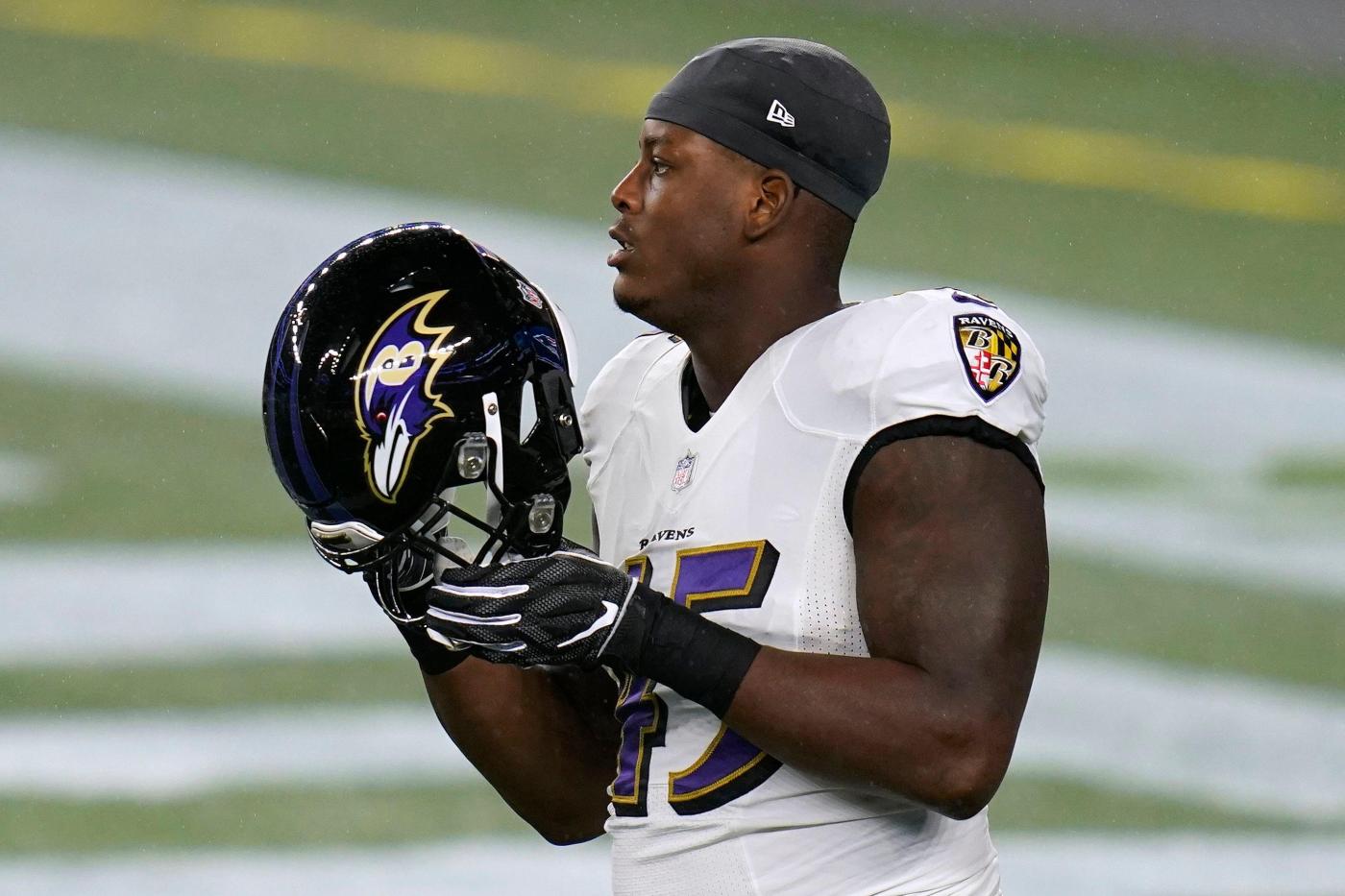 Ravens outside linebacker Jaylon Ferguson died after authorities found him unresponsive late Tuesday in a North Baltimore home. He was 26.

Officials have not released a cause of death, but Baltimore Police said Wednesday that investigators have not ruled out the possibility of an overdose.

“We are profoundly saddened by the tragic passing of Jaylon Ferguson,” the Ravens said in a statement Wednesday. “He was a kind, respectful young man with a big smile and infectious personality. We express our heartfelt condolences to Jaylon’s family and friends as we mourn a life lost much too soon.”

Baltimore Police said Northern District officers responded at about 11:25 p.m. Tuesday to reports of a questionable death at a home in the 400 block of Ilchester Avenue in Baltimore’s Harwood neighborhood. There, police found Ferguson unresponsive and receiving treatment from medics.

“Ferguson never regained consciousness and was pronounced dead on the scene by medics,” Baltimore Police spokeswoman Niki Fennoy said in a statement.

Police said there were no signs of trauma or foul play. They said the medical examiner will determine a cause of death.

Ferguson was entering his fourth NFL season in Baltimore. He looked leaner and more explosive at the Ravens’ three-day mandatory minicamp last week before suffering what coach John Harbaugh called a sprained ankle. Ferguson, who was set to report to training camp in late July, had 67 tackles, 4 1/2 sacks and three forced fumbles over his 38 games (10 starts) with the Ravens.

“Jaylon was a good-hearted, gentle person who loved his family and his team,” Harbaugh said in a statement released by the team. “He was a joy to talk with and be around every day. You always wanted to see and talk to ‘Ferg.’ Our prayers and our help go to his family. Our hearts are with his Spirit. R.I.P., Jaylon.”

Ravens teammates described Ferguson as genuine and supportive. Outside linebacker Tyus Bowser said Ferguson’s “positive energy, encouragement and his belief in me helped mold me into the player and man I am today.” Defensive lineman Calais Campbell said Ferguson “usually had a big smile on his face and would lighten up the room with a joke.” Inside linebacker Josh Bynes wrote on Twitter that he and Ferguson “joked together, laughed together, prayed together, fought on the field together!!”

Safety Tony Jefferson said Ferguson told him before leaving minicamp that he was “ready to have a big year, and I believed it was going to be his best season as a Raven.” Inside linebacker Patrick Queen, a fellow Louisiana native, shared on Twitter that he’d had a recent conversation with Ferguson. “Said it was our turn this year,” he wrote.

“Jaylon had a pure heart,” left tackle Ronnie Stanley said. “He wanted to be a great player, but never tried to downplay his teammates to get there. While going against him in practice, he would always tell me when I was doing a good job, even when it meant it was against himself. He was always with a smile and had an eagerness to learn. He wanted to be better for himself and his kids. He was so excited every time he had a new kid who was about to be born. He always talked about them and how he plays for them.”

A third-round draft pick in 2018, Ferguson set the Football Bowl Subdivision record for career sacks (45) at Louisiana Tech, eclipsing former Arizona State and Ravens great Terrell Suggs’ mark. Then-Ravens defensive coordinator Don “Wink” Martindale told Ferguson after he was drafted that he was “the best pass-rush interview I ever had. When you started talking about pass rush, your eyes lit up, and I can’t wait to get you up here.”

Ferguson was a three-year starter for the Bulldogs, winning Conference USA Defensive Player of the Year honors in 2018 and earning the nickname “Sack Daddy” from a teammate. Ferguson became the first member of his family to earn a college degree.

“The LA Tech Family mourns this morning’s tragic news of the sudden death of former Bulldog great, Jaylon Ferguson,” the Louisiana Tech football team said in a statement shared on Twitter. “We will remember his God-given talents on the field and his infectious personality off of it.”

A day before Ferguson was drafted in April 2019, a tornado with 130-mph winds tore through Ruston, a small city in northern Louisiana, including portions of Louisiana Tech’s campus. The storm left two people dead and caused $9.1 million in damage to city property. In its aftermath, Ferguson joined a wave of volunteers who helped clear debris, drop off food, water and supplies, and help those in need.

Ruston Mayor Ronny Walker called Ferguson a “class act,” a “strong role model” for the area’s youth and “a heck of a pass rusher, too.”

“We lost a person with a big heart and a desire to help the community, no matter where he is,” Walker said in a telephone interview Wednesday. “He was not from Ruston, but yet he adopted the city. And during a time of need, he stepped up to the plate, just like several former players did who came back. So it’s one thing to say, ‘I’m part of the community and I want to help,’ but it’s another thing when you’re going out and actually doing the work.”

Robb Odom, Ferguson’s football coach at West Feliciana High School in St. Francisville, Louisiana, said in an interview that Ferguson was well-mannered, quiet and always “took care of his business.” Ferguson had a big heart, Odom said, and “didn’t have a selfish bone in his body.”

When he was able to come home to Louisiana, Ferguson often visited his alma mater. West Feliciana retired Ferguson’s high school jersey, No. 44, last year. Ferguson’s father, Richard, wore No. 44 as well, and they’d often argue over who was the better player, Odom said.

”The whole community is in shock,” Odom said. “It’s a sad, sad day. He will be missed.”

Neighbors in the 400 block of Ilchester Avenue said the news came as a shock. They were unaware of Ferguson having any connection to the neighborhood, which they said is close-knit and relatively quiet.

“What the hell was a Ravens player doing on this block?” said Lawrence Cox, 40, sounding incredulous. Cox had just pulled up outside his house Wednesday afternoon, having apparently slept through the police response overnight. “That’s breaking news to me,” he said.

Krystle Livering, 40, said she woke up around 4 a.m. and saw a car being towed away from the scene. Hours passed before she realized what the police investigation was about. She said she couldn’t recall hearing about any Ravens players hanging out in the area.

“I have no idea what happened,” she said. “It’s just really sad.”

Ferguson is survived by his fiancée, Doni Smith, and their three young children, Jrea, Jyce and Demi. On her Instagram story Wednesday, Smith shared videos of Ferguson playing with his kids and photos of their family together.

“I love you so much!!” she wrote. “I’ll never in my life feel the love you gave me baby! It’s always been us. You really left me in this world alone baby. I’m broken. I’m hurt. I want you back!!”