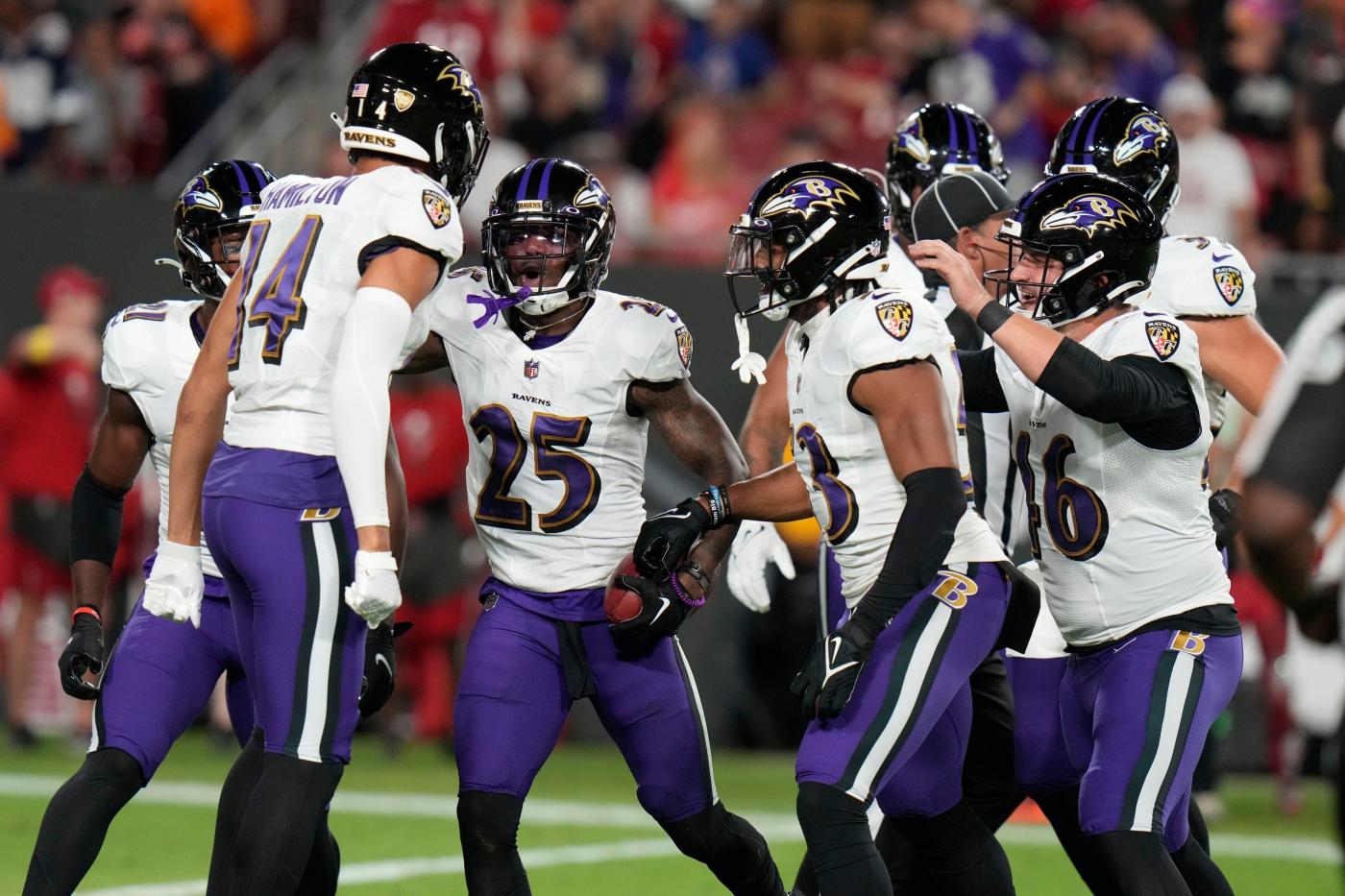 In a strange half-season of soaring starts, wild finishes and everything imaginable in between, Thursday night offered maybe the strangest ending yet for the Ravens: an offense missing three of its top weapons rolling to maybe its best game — and biggest win — of the season.

In securing their first winning streak of the season, the Ravens (5-3) scored on all four of their second-half possessions, excluding a late kneel-down. Their 453 yards of total offense were the most Tampa Bay (3-5) has allowed all season.

Jackson finished 27-for-38 for 238 yards, including a perfect 8-for-8 after halftime, and two touchdowns and added seven carries for 45 yards. The Ravens’ running game rolled for 231 yards on 31 carries. Rookie tight end Isaiah Likely had six catches for a team-high 77 yards. Wide receiver Demarcus Robinson had a game-high-tying six for 64 yards.

Brady, in maybe his final start against the Ravens, finished 26-for-44 for 325 yards and a touchdown. He was also sacked three times, passing the Pittsburgh Steelers’ Ben Roethlisberger for the most taken in an NFL career, and lost a third straight game for the first time in 20 years. Wide receivers Mike Evans and Chris Godwin combined for 198 yards.

The Ravens have now 11 days to rest up before a “Monday Night Football” matchup against the New Orleans Saints, their final game before a Week 9 bye. Even if the Cincinnati Bengals beat the Cleveland Browns on Monday, the Ravens would remain in first place in the AFC North.

A more pressing deadline awaits, though. The Ravens, needing an impact wide receiver and perhaps defensive depth as they steel themselves for an intense divisional battle, have until 4 p.m. Tuesday to trade for help.

They didn’t need much of it in the second half Thursday. After a ragged first half of offense, Jackson led the Ravens on back-to-back-to-back touchdown drives, marching 77 yards for the first, 80 for the second and 83 for the third.

Their running game, largely ignored in the first half, powered the first two touchdown pushes until Jackson punctuated them through the air. He found running back Kenyan Drake for a 5-yard touchdown to tie the game and tight end Isaiah Likely for a 10-yard score and 17-10 advantage.

The decisive blow came midway through the fourth quarter, when wide receiver Devin Duvernay took an end-around on third-and-1 for a 15-yard touchdown. The Buccaneers cut into the Ravens’ 27-16 lead with a short field goal and a last-minute touchdown drive, but the scores sandwiched a Ravens field goal by kicker Justin Tucker. An onside-kick recovery by Likely set the Ravens to win with a rare sigh of relief.

Injuries waylaid the Buccaneers before the short-week game — they were without Pro Bowl safety Antoine Winfield Jr., starting cornerback Carlton Davis III and starting tight end Cameron Brate, among others — and the Ravens during it.

Andrews, kept out of practice all week by a knee injury, left early in the second quarter with a shoulder injury and did not return. Bateman, again limited by a foot injury, ran 11 routes and got just one target in the first half, according to the NFL’s Next Gen Stats, before he was ruled out. Cornerback Marlon Humphrey left briefly in the second quarter with a hamstring injury. Edwards walked off the field slowly after a fourth-quarter hamstring injury.

Before injuries mounted up, though, missed opportunities plagued the Ravens’ start. After a heads-up play by safety Geno Stone forced a Buccaneers fumble on their first punt return, the Ravens settled for a field goal after starting at Tampa Bay’s 6-yard line.

On the Buccaneers’ opening possession, Humphrey dropped a would-be interception on Brady’s first drop-back. Later, cornerback Marcus Peters missed an open-field tackle on Godwin’s 44-yard catch-and-run. A defensive-holding penalty on Peters near the goal line kept the Buccaneers from a third-and-10.

The end result: Tampa Bay’s first first-quarter touchdown all season and first touchdown overall since Week 5, a 1-yard plunge by running back Leonard Fournette. After the Ravens went three-and-out, the Buccaneers followed their 75-yard drive with a 50-yard drive and added a 31-yard field goal for a 10-3 lead.

If the Ravens’ early defense was erratic — they stiffened up in the second quarter — their early offense, often missing its top two receivers, was invisible. The unit’s first play went for 22 yards. Over their next 12 plays, the Ravens went backward (a combined minus-6 yards). Their fourth drive ended on a third-and-22; their fifth drive, on a third-and-36, was pushed back by penalties on wide receiver James Proche II and Jackson.

Their sixth drive was their best of the game, getting as far as Tampa Bay’s 9 just before halftime, but it yielded nothing. On fourth-and-2, the Ravens kept Tucker on the sideline; Jackson’s end-zone pass to Robinson was broken up.

When Tucker did get a crack at his second field goal attempt, a 61-yarder as time expired in the first half, it was blocked. The Ravens jogged off to the locker room, where a comeback was already underway.