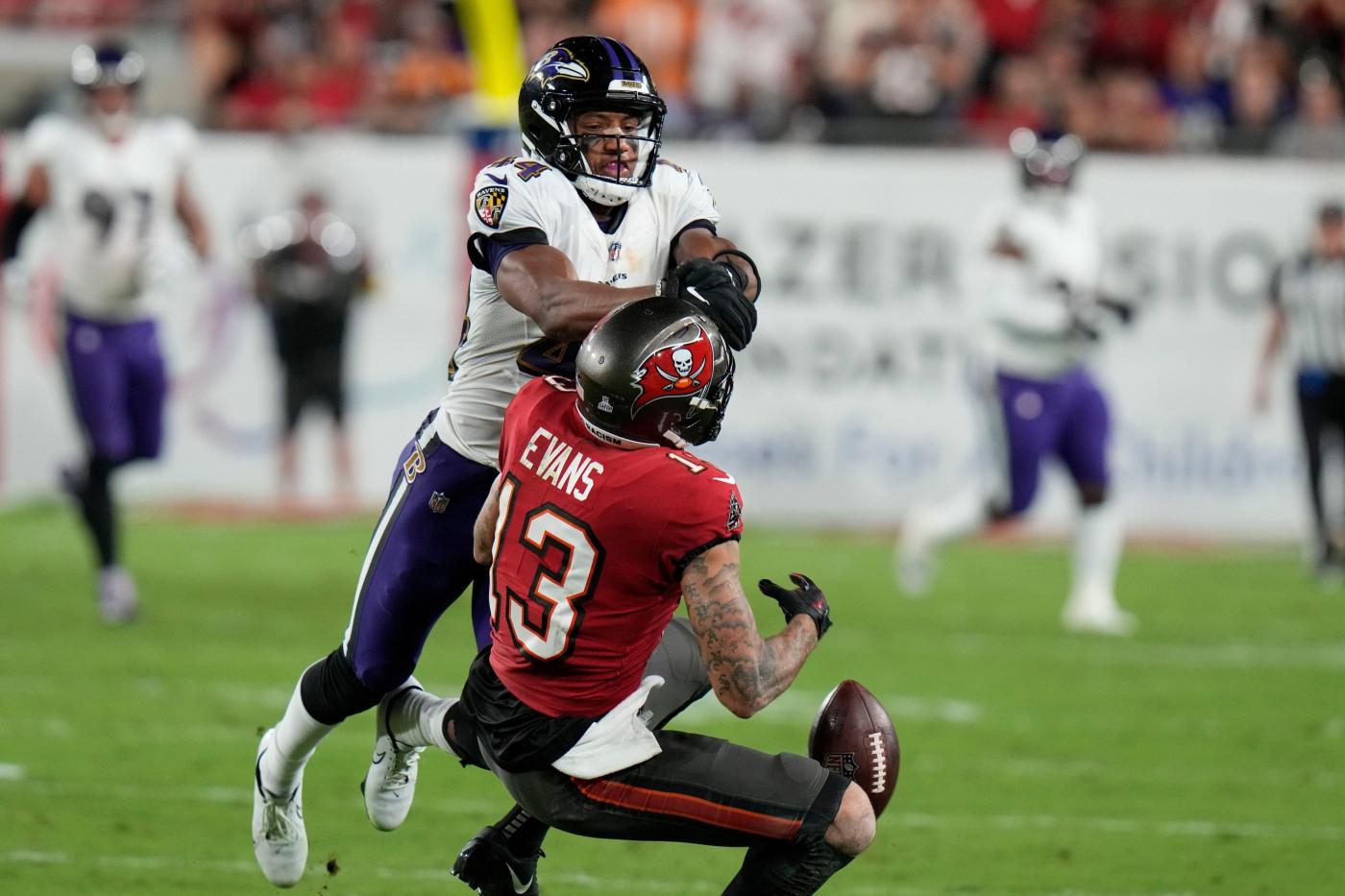 After being listed as questionable to play entering the game, Ravens tight end Mark Andrews, wide receiver Rashod Bateman and running back Gus Edwards exited with injuries during Thursday night’s 27-22 victory over the Tampa Bay Buccaneers.

Andrews was taken into the locker room after suffering a shoulder injury during the second quarter and was ruled out early in the third, while Bateman was ruled out in the third with a foot injury. Coach John Harbaugh said the injuries for Andrews and Bateman are not serious, adding that the second-year wideout aggravated his foot injury that previously kept him out two games.

Edwards, who made his season debut in Sunday’s win over the Cleveland Browns after missing all of last season with a knee injury, limped off the field in the fourth quarter with what the team called a hamstring injury. Harbaugh said Edwards’ injury didn’t look too bad, but the team will know more on Friday. Edwards had 11 carries for 65 yards before exiting.

Since coming back from a torn ACL, Edwards has rushed for 131 yards and two touchdowns on 27 carries in two games.

Injuries piled up throughout the evening for the Ravens. Cornerback Marlon Humphrey also exited with a hamstring injury near the end of the half but returned for the start of the second. Rookie safety Kyle Hamilton hurt his ankle during a collision in the end zone with five minutes left in the fourth quarter but also returned. Cornerback Daryl Worley, who plays mostly on special teams, exited the game near the end of the first half.

With 11:25 left, Andrews caught a 6-yard pass from quarterback Lamar Jackson before walking off the field in obvious pain. He was evaluated inside the team’s medical tent and then escorted into the locker room by trainers.

The two-time Pro Bowl selection did not practice throughout the week as he dealt with a knee injury.

The Ravens might have avoided a long-term absence for Andrews, who has been Jackson’s go-to target. After he set single-season franchise records in receptions (107) and receiving yards (1,361) in 2021, Andrews has a team-leading 488 receiving yards and five touchdowns through the first eight games this season. He caught three of his five targets for 33 yards Thursday before leaving the game.

Bateman missed practice Monday and Tuesday while dealing with a foot injury before returning Wednesday. He was limited in the first half Thursday, playing just 10 of the Ravens’ first 26 snaps while sitting on the sideline during their fourth drive.

Left tackle Ronnie Stanley, who has had his snap counts limited in his return from an ankle injury, was also on the sideline for the Ravens’ last two drives of the first half. He played most of the second half, however, helping the Ravens rush for 206 yards in the final two quarters.

Humphrey and fellow cornerback Marcus Peters (quad) were listed as questionable before kickoff, but both participated fully in practice on Tuesday and Wednesday and played Thursday. Peters finished with three tackles and was flagged for holding on the Buccaneers’ first drive, which led to a touchdown two plays later. Humphrey also dropped an interception early in the game but bounced back to help limit Tampa Bay to two second-half field goals before a last-minute touchdown.

Meanwhile, Buccaneers outside linebacker Shaquil Barrett, a Baltimore native, injured his ankle in the third quarter and was carted to the locker room before being ruled out. Barrett, who had four tackles (three for loss) and a sack, will undergo an MRI on his Achilles tendon, according to ESPN.