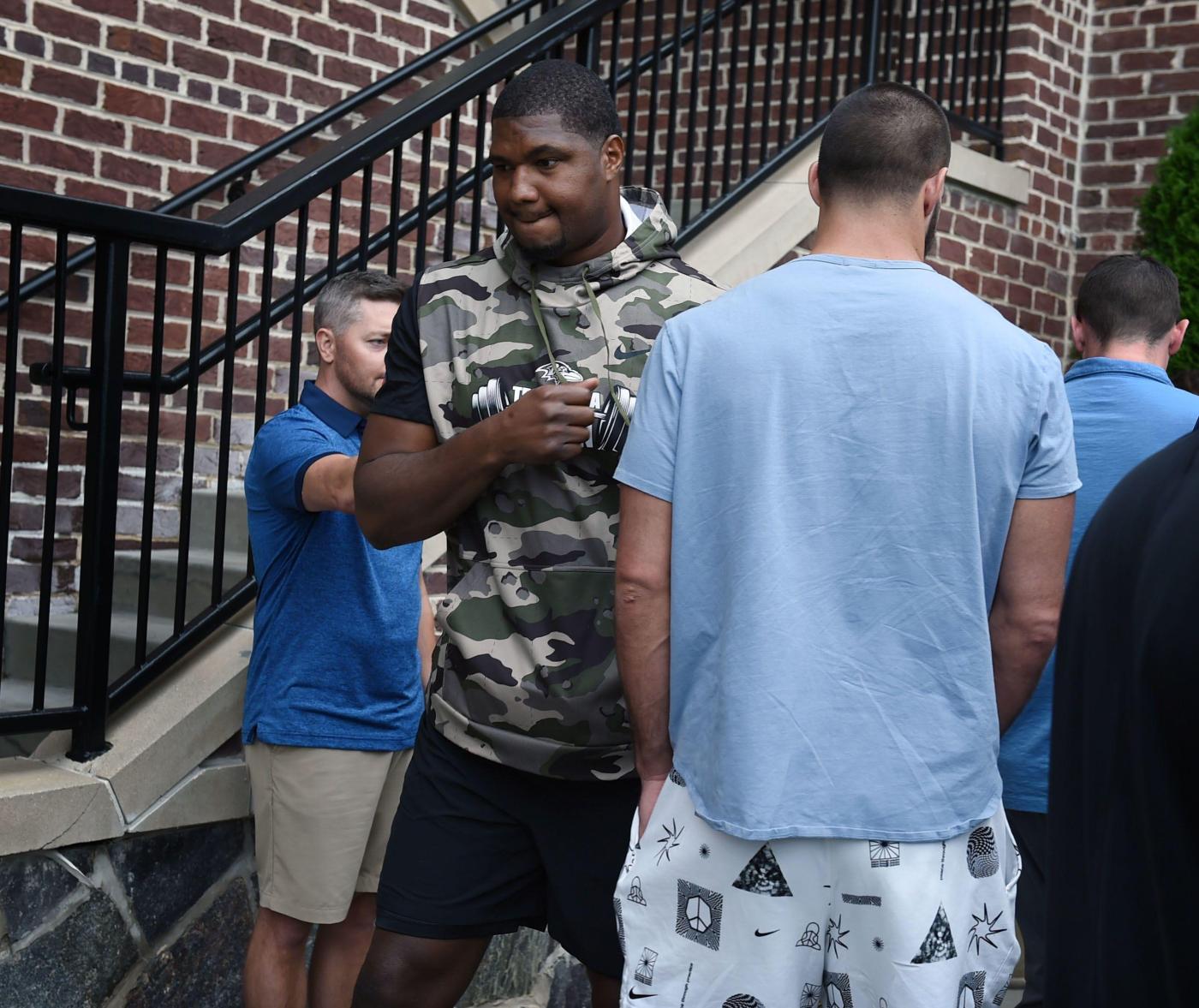 During a training camp practice in which quarterback Lamar Jackson seemed to focus on his deep ball, his most notable connection might have been his easiest.

Matched up against defensive back Brandon Stephens, rookie tight end Isaiah Likely blew past him down the right sideline to get open. Jackson easily lofted the deep pass into Likely’s hands for a 55-yard touchdown — a highlight play of Thursday’s practice.

The Ravens ran the vast majority of their practice without 7-on-7 or 11-on-11 scrimmaging but did some at the end of the afternoon. Whether there was defense or not, Jackson continuously threw deep.

“To see him come in and make those throws is a positive thing for us,” coach John Harbaugh said. “We definitely want to throw the ball downfield, I hope that’s a big part of our offense. It just boils down to how good we are at it. If we get good at it, we’ll be throwing the ball downfield a lot.”

Jackson finished practice 6-for-9 in 11-on-11 drills and 5-for-7 in 7-on-7. Two of the incompletions in 11-on-11 drills were balls thrown away. His best throw of practice was a back shoulder pass to second-year wide receiver Rashod Bateman, who made an impressive leaping catch while turning around midair.

Jackson’s deep balls weren’t all as crisp as the one to Likely, the Ravens’ fourth-round pick out of Coastal Carolina. He had a wobbly deep ball to wide receiver Devin Duvernay in the end zone fall short, though a defensive pass interference call bailed him out.

Likely, who impressed throughout minicamp, is already drawing comparisons to star tight end Mark Andrews. Jackson called him a “baby Mark.” Andrews himself agreed with the comparison.

“He’s got a natural, kind of knack-feel for the game,” Andrews said Tuesday. “I think that he sees the game really, really well. He’s really fluid. When he sees something open, he takes it. He’s got a little bit of me in him, for sure.”

In addition to his touchdown, Jackson went back to Likely for another catch in 7-on-7 drills just after a missed connection.

“Isaiah is like a receiver but a tight end body,” Jackson said Thursday. “He’s like a baby Mark right now.”

Cleveland is battling for the starting left guard spot with Tyre Phillips and Ben Powers, who have been rotating throughout practice in Cleveland’s absence.

The team’s conditioning test is an annual source of consternation for Ravens players. It’s believed to include six back-and-forth, 150-yard sprints, totaling 900 yards, that must be completed in a designated time for each position — 32 seconds for the offensive and defensive linemen, 29 seconds for the tight ends and linebackers and 27 seconds for the wide receivers, running backs and defensive backs. It takes just one failed heat to fail the test.

“It’s got to resolve itself,” Harbaugh said of the left guard battle. “You want the decision to be made for you in terms of somebody taking the job, somebody taking the bull by the horns and owning the job. That’s what we want to do. We’ll see. How long it will take kind of depends on how long it takes. The sooner the better, for sure. All the guys are doing well so far.”

Wide receiver Devon Williams returned from the nonfootball injury list to practice Thursday and was one of the many Ravens targets to drop a pass.

Most of the drops came in drills without defense and did not slow the Ravens’ offense during scrimmages.

On the play after Duvernay’s drop, he made a nice catch along the sideline against veteran cornerback Kyle Fuller.

Harbaugh said backup quarterback Tyler Huntley has been limited in practice after missing time in minicamp with shoulder tendinitis and is day-to-day.

Huntley, who started four games last season in place of an injured Jackson, participated in the early drills but not in the final scrimmage. Harbaugh said that Huntley’s shoulder might have been bothering him by the end of practice.