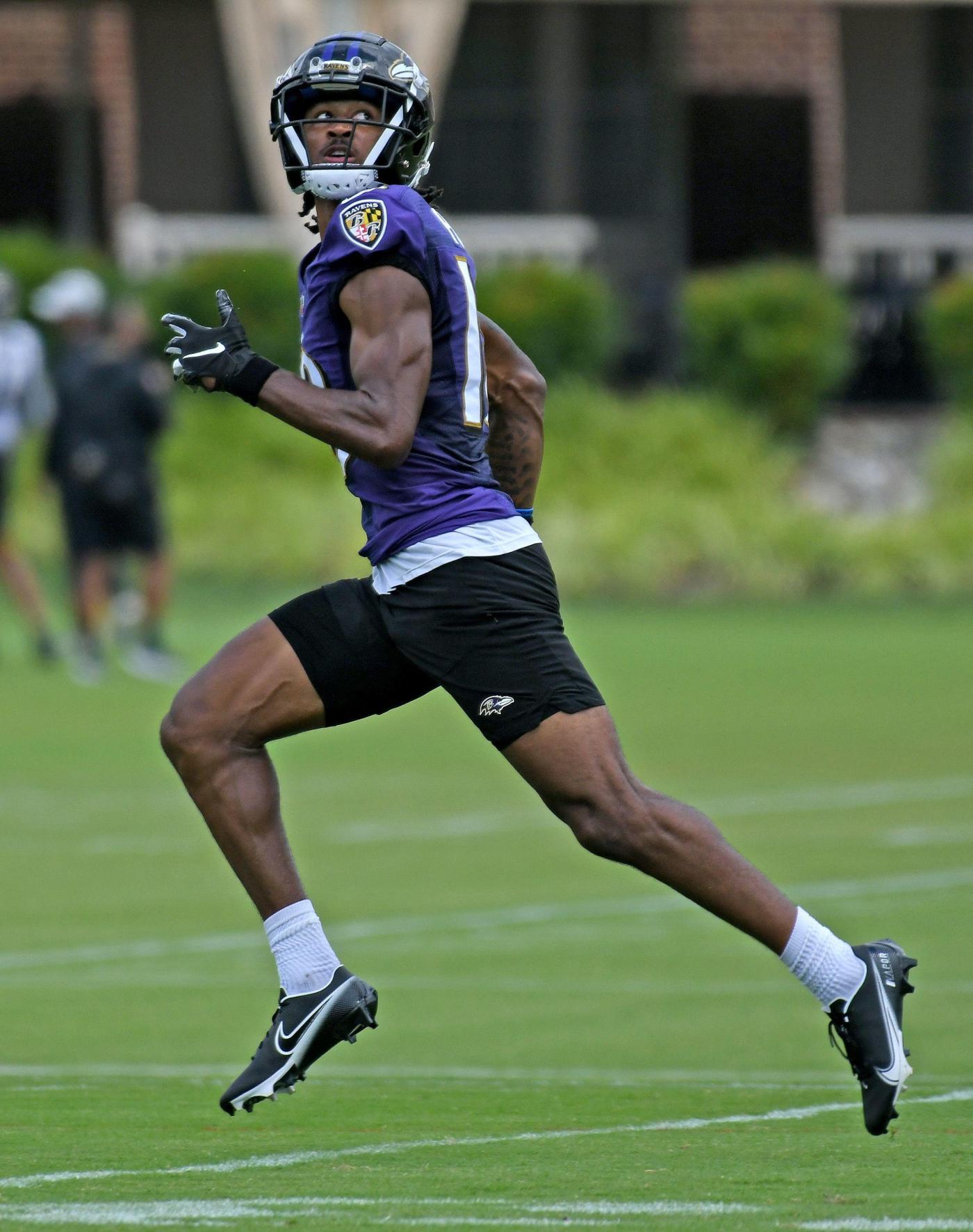 When Ravens training camp opened, there seemed to be a clear hierarchy in the wide receiver room. There were four roster locks, Rashod Bateman, Devin Duvernay, James Proche II and Tylan Wallace, all players drafted within the past two years; then there was everyone else, the newly or somewhat recently undrafted, all fighting for a potential fifth spot.

A week and a half into camp, Jaylon Moore has emerged from the unproven group as the early favorite. The former Tennessee-Martin wide receiver and sprinter spent his first two NFL seasons on the Ravens’ practice squad, biding his time and learning the craft. With more snaps available in the wake of top wide receiver Marquise “Hollywood” Brown’s late-April departure, and minor injuries in camp sidelining Bateman (soft tissue) and Duvernay (thigh), Moore has made the most of his opportunities.

At Saturday’s practice, the last of six in a row before Sunday’s day off, the 5-foot-11 Moore had the biggest highlight of a day light on explosive plays. Matched up against Denzel Williams in 11-on-11 action, Moore ran a vertical route down the right sideline, gaining a half-step on the undrafted rookie cornerback from Villanova. Lamar Jackson feathered a pass to the back corner of the end zone, giving Moore just enough time to run underneath it and secure a 40-yard score with a diving grab.

“They’ve kind of all made plays at one point in time or another,” coach John Harbaugh said Saturday of the Ravens’ undrafted receivers. “The reps are so spread out because they’re all getting a chance now. And then we had some guys out or whatever, and we pulled some guys back, and those guys were getting reps now. So, I think that kind of ends up being the plan a little bit. We have to give all those guys a shot because we don’t know who’s going to step forward. They’ll all play a lot in the [preseason] game [against the Tennessee Titans on Thursday]. We’ll see what you see.”

Moore has impressed throughout camp, winning in one-on-one drills, making himself available over the middle to all four Ravens quarterbacks and fighting for jump balls on deep shots. While special teams ability could prove decisive in the Ravens’ bottom-of-the-roster wide receiver evaluations, offensive coordinator Greg Roman said Wednesday that Moore was “putting himself in position to make the team and have a role. … He’s definitely shown himself as somebody who can factor in.”

Other receivers have flashed, if only for short stretches. Rookie Shemar Bridges (Fort Valley State) was an early standout. Binjimen Victor, a second-year wideout from Ohio State, came on strong shortly thereafter. In recent practices, Makai Polk (Mississippi State) has been among the most productive of the undrafted options. Fellow rookie Slade Bolden (Alabama) had a highlight Saturday with a diving touchdown catch in a red-zone drill despite being held.

“I think they know how urgent and how ready they need to be to show what they need to show to stay on this team,” wide receivers coach Tee Martin said Friday. “Some guys get really comfortable at practice, because they’re going against the same guys every day, and then they go against another team, another defensive structure, and you really see — good or bad — what these guys can do.”

>> Jackson, who said in an NFL Network interview last weekend that he’s up to 230 pounds, still looks explosive and agile in the open field, much like he did weighing 15 to 20 pounds lighter. “I like him,” Harbaugh said. “I like the way he looks. I like what he’s done with himself. And, yeah, it hasn’t slowed him down at all.”

>> Rookie offensive tackle Daniel Faalele, who played exclusively at right tackle at Minnesota, has seen some time at left tackle in camp. “We just want to kind of get a feel for him,” Harbaugh said. “He’s never played there before and we’ve got an opportunity with some reps over there. It kind of makes sense just to put him over there and see how he does. … During the season, you never know who might have to go where and play what. And he did a good job, actually. Now, he gets a little tired, his technique fell off toward the end of practice today, but that’s something just to focus on.”

>> Harbaugh said the Ravens could look to bring in another cornerback, partly due to the volume of passes the offense has thrown in camp.