Todays Though > News > Ravens vs. Bills scouting report for Week 4: Who has the edge?
News

Ravens vs. Bills scouting report for Week 4: Who has the edge? 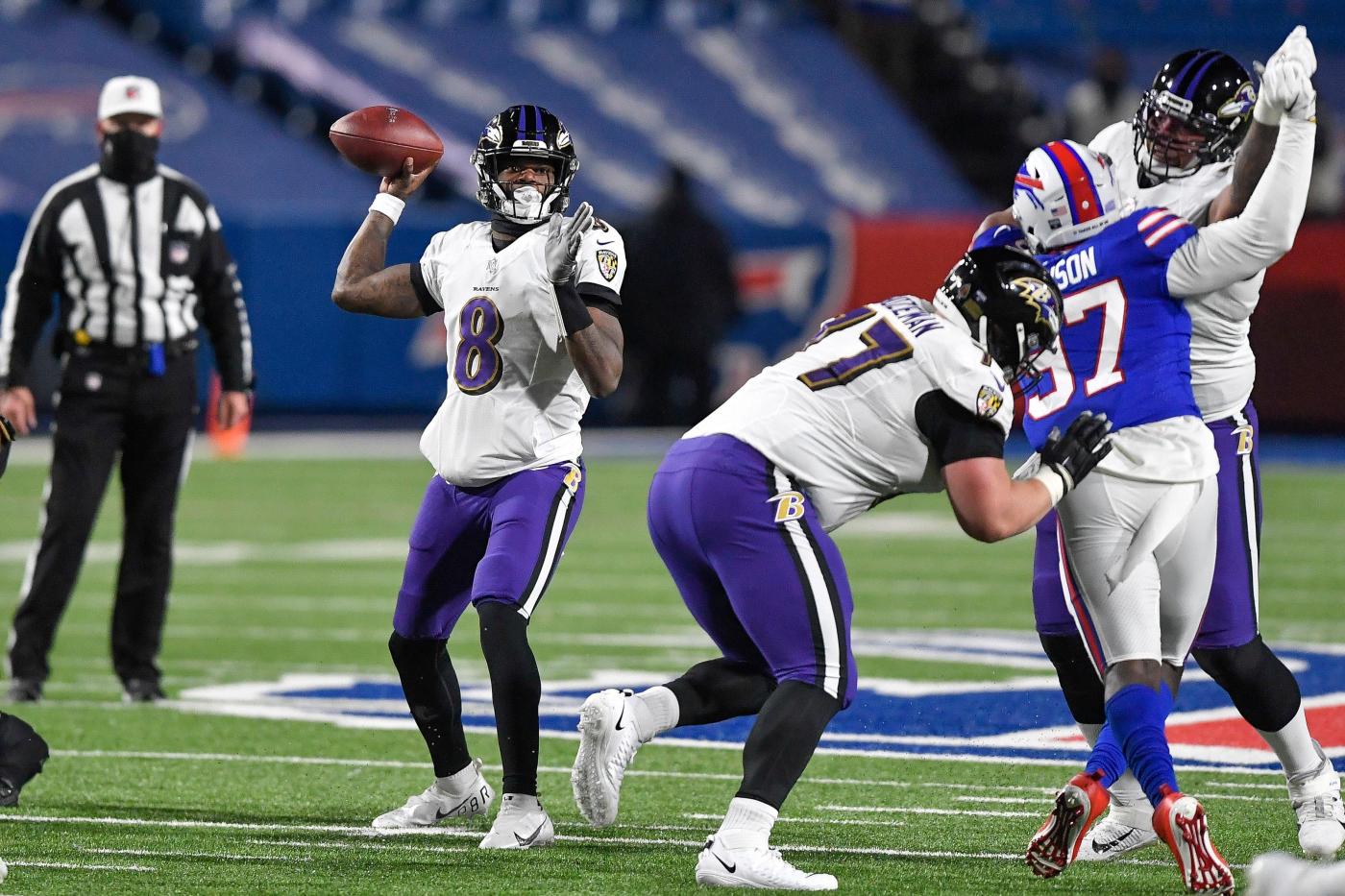 After a tense road win against the New England Patriots, the Ravens will return home to face the Buffalo Bills, who have largely lived up to their preseason hype as Super Bowl favorites. In a series of exciting matchups, topped by Most Valuable Player candidates Lamar Jackson and Josh Allen, who has the edge?

Lamar Jackson is off to the best start of his career, leading the league in passer rating, ranking second in ESPN’s QBR and punishing blitzes better than any quarterback in the league. He’s second in the league in air yards per attempt and fourth in air yards per completion, signs of his eagerness and skill as a downfield thrower, and he has connected for at least three touchdown passes in each of the Ravens’ three games.

Jackson’s top targets are all thriving one way or another. Mark Andrews is again the league’s top-graded tight end, according to Pro Football Focus, after he caught two touchdown passes in the Ravens’ 37-26 win over the Patriots. No. 1 wide receiver Rashod Bateman just missed another long touchdown against the Patriots and lost a fumble thanks to a questionable call, but he’s averaging 28.3 yards per catch. No. 2 wide receiver Devin Duvernay has caught all eight passes thrown his way this season and has demonstrated his toughness as a red-zone target with three touchdowns. The Ravens suffered through a brief stretch of panic against the Patriots when rookie Daniel Faalele had to step in at left tackle for an injured Patrick Mekari (ankle) and allowed sacks on each of his first two series. But Faalele settled down and helped give Jackson a clean pocket in the second half. With Mekari and Ronnie Stanley (ankle) potentially unavailable against the Bills, however, the Ravens are back to facing significant questions about their tackle depth.

Buffalo is confronting its own injury woes in the secondary, with safety Micah Hyde and cornerbacks Tre’Davious White and Christian Benford (hand) out and cornerback Dane Jackson (neck) and safety Jordan Poyer (foot) dealing with injuries that sidelined them in a 21-19 Week 3 loss to the Miami Dolphins. Despite their health woes, the Bills have held opposing quarterbacks to 4.9 yards per attempt. Matt Milano and Tremaine Edmunds are every-down linebackers who have excelled in coverage. Eight-time Pro Bowl selection Von Miller (two sacks, four tackles for loss) is off to another strong start at age 33, and second-year edge rushers Gregory Rousseau (3 1/2 sacks, five tackles for loss) and Boogie Basham round out a stellar group that will sorely test Jackson’s pass protection. The Bills blitz less than any team in the league because they don’t need extra rushers to create pressure.

The Ravens struggled to prevent long completions by Miami’s Tua Tagovailoa and New England’s Mac Jones. Now, they’ll face one of the league’s elite players in Allen, who ranks third in QBR and has completed 71.2% of his passes with nine touchdowns against two interceptions. The Bills struggled in the red zone against Miami but controlled the ball for 90 plays and more than 40 minutes of game clock as Allen completed 42 of 63 passes. He moves the ball around, but former Maryland star Stefon Diggs (27 catches, 344 yards, four touchdowns) remains his unquestioned top target. The Ravens could not cover New England’s DeVante Parker, so what might Allen and Diggs do against the league’s 32nd-ranked pass defense?

On the plus side for coordinator Mike Macdonald’s defense, starting cornerbacks Marlon Humphrey and Marcus Peters resumed full workloads and played well against the Patriots. Rookie safety Kyle Hamilton also produced his best game as a pro, helping to clinch the win with a vital punch-out in the fourth quarter. The Ravens excelled when they went to their dime formations (six defensive backs) with the game on the line. Meanwhile, young cornerbacks Jalyn Armour-Davis and Brandon Stephens, and to a lesser degree Damarion “Pepe” Williams, struggled in coverage. The Ravens also need more from their thin crew of edge rushers, which grew thinner when veteran Justin Houston hurt his groin early against the Patriots. We’ll see if they receive an immediate contribution from Jason Pierre-Paul, who signed this week. Second-year outside linebacker Odafe Oweh has struggled to produce against increased blocking attention, with no sacks or quarterback hits in 183 defensive snaps. In their two victories, the Ravens have masked their defensive shortcomings by creating turnovers; their four against the Patriots were more than they managed in any game last season.

With J.K. Dobbins back in the lineup after a lost 2021, the Ravens finally revved up their ground attack against the Patriots, gaining 188 yards on 26 attempts. Jackson was the star of the show, surpassing 100 yards for the second straight week and putting the Patriots away with several clutch option keepers. Justice Hill continued to make the most of his limited opportunities with 60 yards on six carries, including a 34-yard gain to set up the Ravens’ go-ahead touchdown in the third quarter. Dobbins (seven carries, 23 yards) is still working his way back to peak form but showed flashes of the balance and quickness that made him a standout rookie two years ago.

The Bills rank second in run defense and have allowed opponents just 2.8 yards per carry. They held Tennessee Titans superstar Derrick Henry to 25 yards on 13 carries in a Week 2 blowout. Milano is the centerpiece, but their edge defenders have also done excellent work bottling up opposing backs. The Bills ranked a more middling 13th against the run last season, and Jackson will present a unique test for them.

The Bills are a pass-first team without a scary running back, but Allen is such a threat with his combination of power and speed that they still present a challenge on the ground. Allen leads his team with 113 yards on 19 carries, and his mobility makes Buffalo the league’s most efficient team on third down with a 61% conversion rate. Devin Singletary (23 carries, 80 yards), Zack Moss (13 carries, 78 yards) and rookie James Cook (13 carries, 58 yards) have shared the rest of the load from the backfield. The Patriots ran for 145 yards on 28 attempts against the Ravens, and coach John Harbaugh said his defenders need to find better fits to close gaps and to cut out the garbage yards they allowed against the slow-footed Jones.

Allen will present a vastly greater challenge on scrambles and could beat the Ravens with his legs if they’re insufficiently attentive. The burden of monitoring him will fall on linebackers Patrick Queen and Josh Bynes and safeties Chuck Clark and Marcus Williams. Up front, veteran defensive end Calais Campbell played his best game of the season against the Patriots, and third-year defensive tackle Justin Madubuike is off to the best start of his career. But the Ravens would miss the interior power of nose tackle Michael Pierce, who tore his biceps in Week 3 and as of Wednesday was deciding whether to have season-ending surgery.

The Ravens’ special teams continue to rank first in Football Outsiders’ DVOA. All-Pro kicker Justin Tucker has made all three of his field-goal attempts this season, hitting from 51 and 56 yards the last two weeks. Duvernay followed up his 103-yard kickoff return in Week 2 with a 43-yard punt return to set up a touchdown against the Patriots. He’s the league’s most dangerous returner. On the downside, rookie Jordan Stout was inconsistent again in Week 3, nailing a 55-yard punt in the first quarter only to come back with a 23-yard misfire in the fourth.

The Bills lack the Ravens’ star power, but they’re also solid on special teams, ranking eighth in DVOA. Kicker Tyler Bass has made four of five attempts this season, and Jamison Crowder has averaged 11.6 yards on eight punt returns.

Though they both lost to the Dolphins, these are the No. 1 and No. 3 teams in the league by DVOA, so there’s plenty of confidence to be found on both sides. Harbaugh is one of the top veteran coaches in the league. Buffalo’s Sean McDermott (51-33 in the regular season) is one of the best in the generation behind him. Franchise quarterbacks Jackson and Allen have been unstoppable so far. Both teams are coping with accumulating injuries at key positions. Both would like to put their Miami hiccups in the rearview mirror.

There’s not a lot to separate the combatants in this glamour matchup. Rain from the remnants of Hurricane Ian could be an X-factor.

These are two of the NFL’s top three scoring teams, with Jackson and Allen at or near the top of early Most Valuable Player lists. The essential matchup will be Allen vs. the Ravens’ erratic pass defense. Can the Baltimore secondary clamp down on big plays while continuing to generate turnovers? The Bills are the safer bet because they’ve been sounder on both sides of the ball. Bills 30, Ravens 27