Todays Though > News > Ravens vs. Browns scouting report for Week 7: Who has the edge?
News

Ravens vs. Browns scouting report for Week 7: Who has the edge? 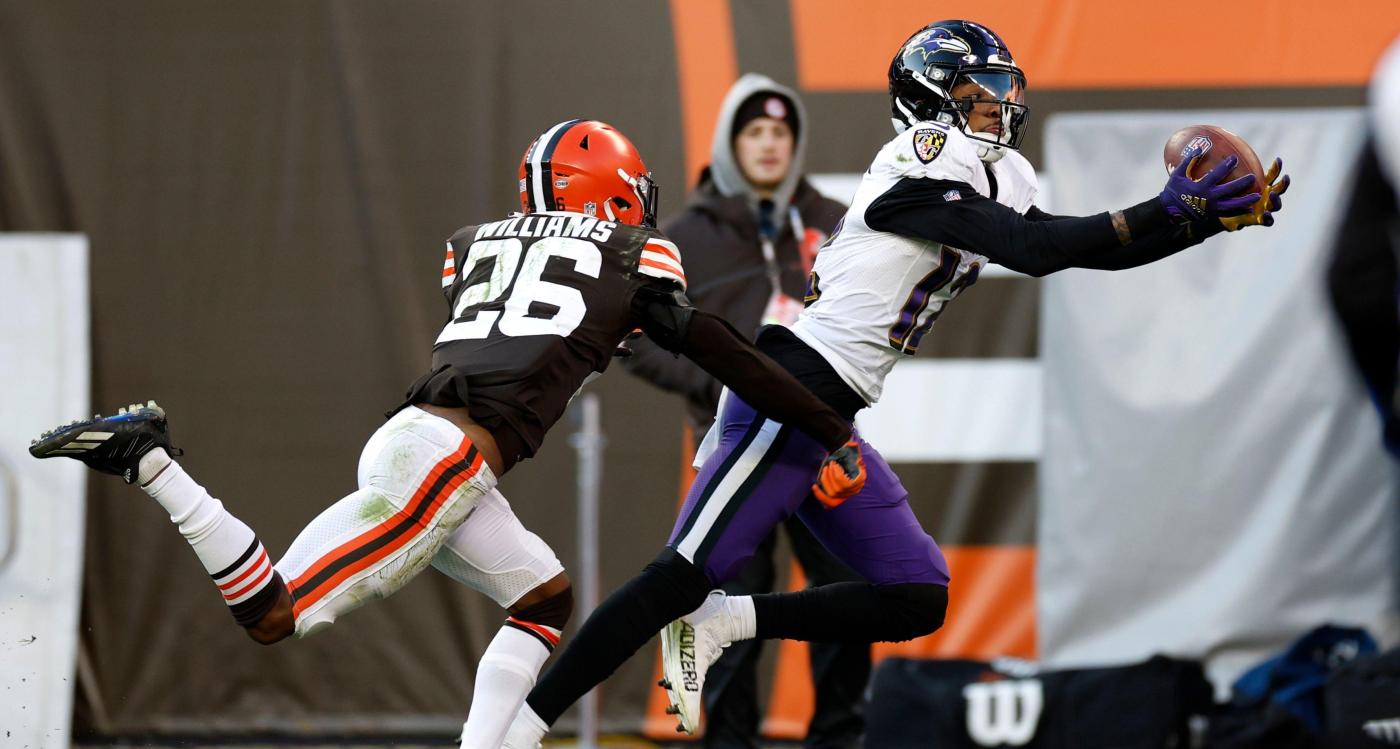 The Ravens blew another double-digit lead in their Week 6 loss to the New York Giants. The Cleveland Browns suffered an even more dispiriting defeat to the New England Patriots. Which of these AFC North rivals will have the advantage when they match up Sunday at M&T Bank Stadium?

After a brilliant start, Lamar Jackson has struggled as a passer the last three weeks, coinciding with the absence of No. 1 wide receiver Rashod Bateman because of a foot injury. Jackson completed just five of nine passes for 45 yards to his wide receivers in the Ravens’ loss to the Giants, and he has overlooked or overshot open targets too often during his recent funk. His struggles have deepened late in games, culminating with his desperate fourth-quarter interception against the Giants after he picked up an errant snap from center Tyler Linderbaum. Coach John Harbaugh acknowledged that the Ravens underused wide receiver Devin Duvernay (18 catches on 25 targets, 240 yards, three touchdowns for the season) in the Week 6 loss. Bateman returned to practice Wednesday, and the Ravens added 35-year-old speed demon DeSean Jackson to their practice squad, though we don’t know how soon he’ll play. For now, tight end Mark Andrews (39 catches on 57 targets, 455 yards, five touchdowns) is the only sure thing in a struggling aerial attack.

Jackson and Co. will try to regain their footing against a Cleveland pass defense that has been less than the sum of its parts. Defensive end Myles Garrett (five sacks, six tackles for loss) remains the league’s top edge defender, as graded by Pro Football Focus, and Jadeveon Clowney is not far behind, but the Browns rank in the bottom 10 in pressures per drop-back. Cornerback Denzel Ward signed a $100 million contract in the offseason but has played poorly by his standards. The Browns have forced just five turnovers, and Patriots backup Bailey Zappe shredded them in that 38-15 thrashing in Cleveland last Sunday. Garrett could provide the greatest individual test so far for Ravens left tackle Ronnie Stanley, who has pass blocked exceptionally well since he returned from ankle surgery in Week 5. Ward (concussion), Garrett (shoulder/biceps) and Clowney (ankle) did not practice Wednesday.

Quarterback Jacoby Brissett threw two interceptions and completed just 21 of 45 passes against the Patriots but has generally exceeded expectations as the Browns wait for suspended starter Deshaun Watson. Brissett has made good use of trade addition Amari Cooper (31 catches on 55 targets, 348 yards, four touchdowns), but as with Andrews on the Ravens, tight end David Njoku (27 catches on 35 targets, 347 yards, one touchdown) is probably the sharpest weapon in Cleveland’s pass-catching cupboard. Brissett operates behind one of the league’s best offensive lines, led by guards Joel Bitonio and Wyatt Teller, but he did feel some heat from the Patriots after Teller left the Week 6 loss with a calf injury.

The Ravens have cut down opponents’ big plays since the Miami Dolphins torched them in a Week 2 loss, and they have forced 12 turnovers, third best in the league. But they allowed the Giants to convert on seven of 14 third downs and could not get off the field as New York quarterback Daniel Jones led a 12-play touchdown drive to cut their lead to three in the fourth quarter. Safety Geno Stone played well stepping in for injured starter Marcus Williams, and the Ravens got three sacks from interior pass rushers Justin Madubuike, Travis Jones and Calais Campbell. But they need more from outside linebacker Odafe Oweh, who has one sack and two quarterback hits after coaches and observers tabbed him as a rising star in training camp. The Browns will use Njoku to test the middle of the Baltimore defense, where linebacker Patrick Queen has played two straight good games but has struggled in coverage through much of his career.

The Ravens ran for a season-best 211 yards against the Giants, and their early struggles on the ground are distant memories with Kenyan Drake (119 yards on 10 carries in Week 6) coming on and Gus Edwards (knee) and Justice Hill (hamstring) nearing returns. Jackson remains the heart of the operation, leading the Ravens with 451 rushing yards on an absurd 8.1 yards per carry. He’s as deadly on designed runs as he is on improvised scrambles. On a more concerning note, starting running back J.K. Dobbins did not play in the second half last Sunday after his surgically repaired knee tightened up.

Offensive coordinator Greg Roman’s ground attack will take aim at one of the league’s worst run defenses. The Browns have allowed opponents to average five yards per carry and gave up more than 200 rushing yards to both the Atlanta Falcons and Los Angeles Chargers. Linebackers Jacob Phillips and Jeremiah Owusu-Koramoah have graded poorly against the run, and the Browns don’t have a powerhouse interior defender to complement their stars on the edges. If the Ravens dominate the game, this will be where it happens.

The Browns go about it differently, but they’re just as productive as the Ravens, leading the league in rushing and averaging 5.2 yards per carry thanks to All-World running back Nick Chubb, able backup Kareem Hunt and stellar interior blocking. The Patriots neutralized Chubb better than any previous opponent, because they built an early lead and pushed Browns coach Kevin Stefanski to lean on his passing game. The Ravens also did an excellent job against Chubb last year, limiting him to 75 yards on 25 carries as they kept him from getting outside for big gains. They know Chubb can turn any handoff into a touchdown if they don’t set the edges and tackle soundly.

Coordinator Mike Macdonald’s defense will try to build off a solid outing against the Giants’ Saquon Barkley (22 carries, 83 yards), one of the few runners in the league as dynamic as Chubb. The Ravens rank seventh in run defense and have allowed opponents to average 4.5 yards per attempt. Linebacker Malik Harrison has helped them of late, complementing Madubuike and Campbell’s stout resistance on the inside.

The Ravens suffered unusual letdowns on special teams against the Giants, with Justin Tucker missing a 56-yard field-goal attempt and Gary Brightwell returning a kickoff 47 yards to jump-start a touchdown drive. They still rank first in special teams efficiency, according to Football Outsiders’ DVOA, thanks to All-Pros Tucker (11 of 12 field-goal attempts) and Duvernay (13.3-yard return average on punts, 36.6-yard return average on kickoffs). The Browns rank 21st in special teams DVOA. Rookie kicker Cade York has made 11 of 13 field-goal attempts, including one from 58 yards, but he has missed two extra-point attempts. The Browns have averaged a measly 5.2 yards on 13 punt returns.

The Ravens talked repeatedly of how they are their own worst enemies after they blew another lead in an error-riddled performance against the Giants. Harbaugh and his staff are facing more scrutiny than usual given the raft of presnap penalties and poor execution on key downs that doomed the Ravens to defeat. They have trailed a total of 117 seconds in their three losses this season, an indicator of their inability to finish off opponents.

The Browns are just as deep in the dumps coming off a home-field loss to the Patriots and earlier collapses against the Chargers and New York Jets. For all their star power, they’re 2-4 and staring up at the Ravens and Cincinnati Bengals in the AFC North. Two years after he won Clevelanders’ love by steering the Browns back to the playoffs, Stefanski feels his seat growing warmer as he waits for Watson to take over his offense.

The Ravens could enter full-on crisis mode if they lose to the floundering Browns at home. But they’re the better all-around team with the right offense to gash Cleveland’s tender middle and keep running back Nick Chubb off the field. For once, they will not have to sweat until the final seconds. Ravens 30, Browns 20