Todays Though > News > Ravens vs. Falcons scouting report for Week 16: Who has the edge?
News

Ravens vs. Falcons scouting report for Week 16: Who has the edge? 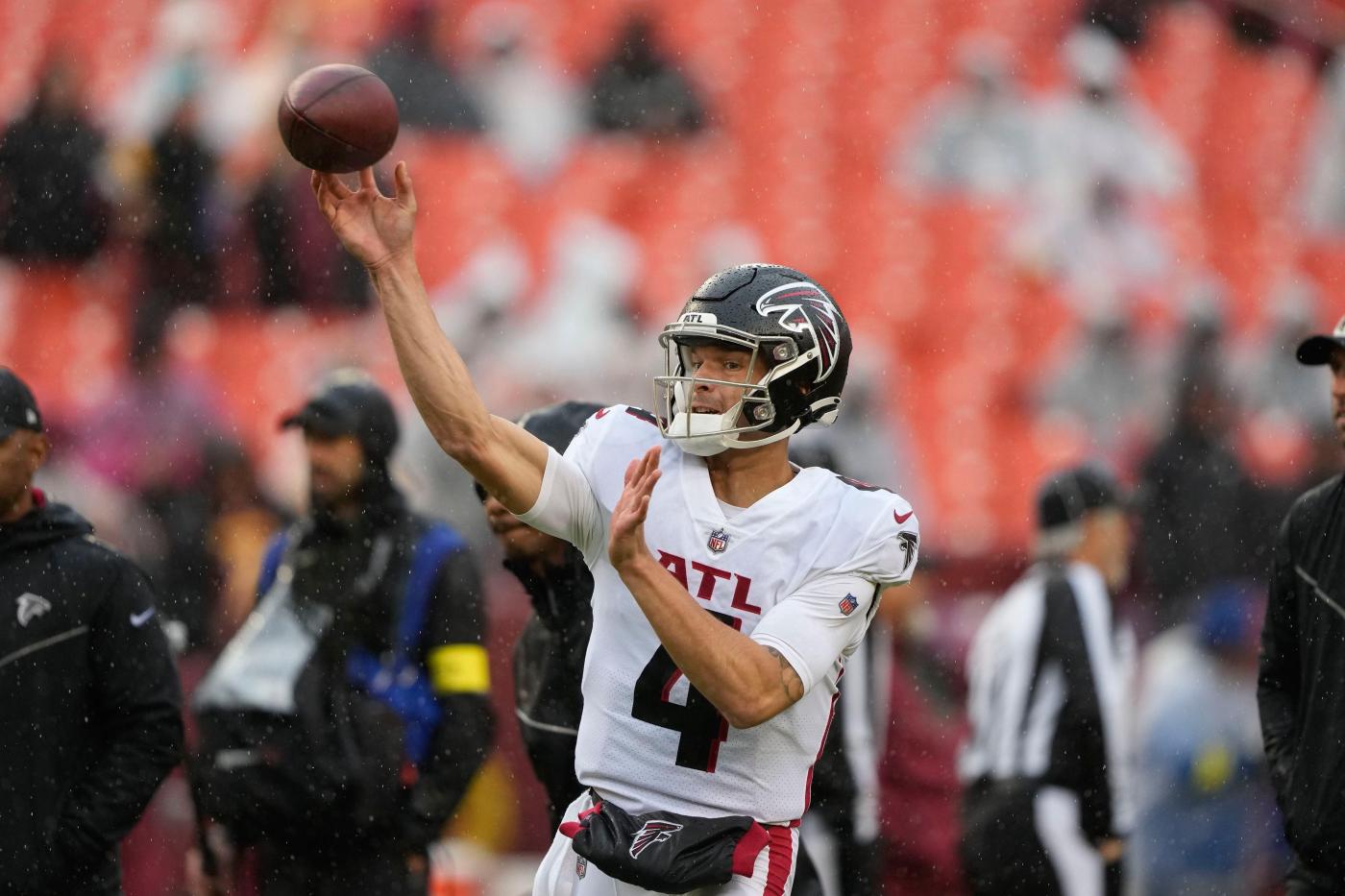 The Ravens turned in a dismal performance in their 13-3 loss to the Cleveland Browns and are still awaiting the return of quarterback Lamar Jackson. The Falcons have lost five of six but somehow remain in contention for the NFC South title. Which team will have the advantage on Christmas Eve?

“It’s not a good enough passing game right now across the board,” Ravens coach John Harbaugh said after his team threw for 138 yards and scored three points against the Browns. That about sums it up. The Ravens rank 29th in Football Outsiders’ pass DVOA since their bye week and have thrown for less than 200 yards in five of their last six games. None of their wide receivers has caught a touchdown pass since Week 3, and tight end Mark Andrews, their most prolific pass catcher, has not caught one since Week 6. They rank 28th in the league in touchdown percentage from the red zone. The Ravens hoped to have franchise quarterback Lamar Jackson against the Falcons, but he did not practice Tuesday or Wednesday, casting doubt on his availability. It’s not as if their aerial attack was humming before Jackson hurt his knee. Demarcus Robinson (44 catches on 62 targets, 419 yards) has been a relative bright spot in the receiving corps, but the Ravens are asking for him to be a No. 1 when the plan coming into the season was for him to be a No. 3. They lost their other starting wideout, Devin Duvernay, to a foot injury, replacing him with waiver claim Sammy Watkins, who caught 27 passes for 394 yards for them in 13 games last season. Though Harbaugh expressed faith in Jackson’s backup, Tyler Huntley, after the loss in Cleveland, Huntley has averaged just 5.6 yards per attempt with no touchdown passes and two interceptions this season. He was limited in practice Wednesday because of an injury to his throwing shoulder. Undrafted rookie Anthony Brown would be the other option Saturday if Jackson is out.

On the plus side for the Ravens, they’ll try to get well against a pass defense that ranks 29th in DVOA. The Falcons are 30th in third-down defense and 22nd in red zone defense. They rank last in pressures per dropback and second to last in sacks. Defensive tackle Grady Jarrett is their most productive pass rusher and Darren Hall their best cornerback, but coordinator Dean Pees, a familiar face to Ravens fans, isn’t working with much star power.

Rookie quarterback Desmond Ridder didn’t make a good impression in his first NFL start against the New Orleans Saints, completing 13 of 26 passes for 97 yards. Atlanta’s passing game was one of the least productive in the league under pervious starter Marcus Mariota, so Ridder’s struggles were not surprising. The Falcons lost their most dynamic pass catcher when second-year tight end Kyle Pitts went on injured reserve. Among their wide receivers, 6-foot-5 rookie Drake London is a bright spot. He was Ridder’s only productive target in the loss to New Orleans, with seven catches for 70 yards. The Falcons have to do a better job protecting their rookie quarterback, who ate four sacks against the Saints.

The Ravens will take on Atlanta without starting cornerback Marcus Peters, who injured his calf against the Browns. But if they had to pick an opponent to face with Brandon Stephens at cornerback, the Falcons would probably be it. The Ravens rank eighth in pass DVOA, fifth in sacks, third in takeaways and third in third-down defense. Cornerback Marlon Humphrey has played at a Pro Bowl level, safety Marcus Williams hasn’t missed a beat in two games since he returned from a wrist injury and rookie nickel back Kyle Hamilton has settled in as the secondary’s jack of all trades. As for the pass rush, the Ravens would miss defensive end Calais Campbell if he’s sidelined by the knee injury he suffered against Cleveland. Outside linebacker Justin Houston still leads the team with nine sacks but hasn’t recorded one in his last four games.

J.K. Dobbins (13 carries, 125 yards) and Gus Edwards (seven carries, 55 yards) were the stars of the offense in Cleveland, breaking six double-digit runs between them. Dobbins has criticized himself for not going all the way on long runs each of the last two weeks, but he has restored an explosive dimension to the team’s running back, which will only get better when Jackson, the Ravens’ leading rusher, is back. Offensive coordinator Greg Roman does not call as many designed quarterback runs with Huntley in the lineup. In another bright spot on a dreary day for the offense, the Ravens’ starting offensive line played the entire game in Cleveland.

Atlanta defends the run better than the pass, but that’s not to say it’s an area of strength. The Falcons rank 26th in rush DVOA and have given up an average of 171 yards over their last five games. Linebacker Rashaan Evans is their top tackler in the middle and Ta’Quon Graham their top interior run defender.

Here we have strength against strength. The Falcons rank third in rushing, third in rushing attempts and fourth in yards per attempt with an attack that, like the Ravens’, features multiple backs and designed runs for the quarterback. They did not lose a step with Ridder at the helm, running for 231 yards against the Saints, led by Tyler Allgeier’s 139 on 17 carries. Cordarrelle Patterson has been just as productive, averaging 5.1 yards per carry and leading the Falcons with six rushing touchdowns. Ridder carried six times for 38 yards against New Orleans, so the Ravens will have to keep an eye on him. Right guard Chris Lindstrom and right tackle Kaleb McGary clear the way for much of this production.

The Ravens, meanwhile, have stopped the run better than any team in the league since they traded for linebacker Roquan Smith. Smith and Patrick Queen are the chief playmakers, but Campbell, Justin Madubuike and Broderick Washington keep blockers occupied upfront, and Hamilton is a punishing hitter from the nickel spot. Brent Urban played well in place of Campbell against the Browns and would likely take on more snaps if the veteran star is out against Atlanta.

The Ravens delivered a rare special teams stinker against the Browns and fell out of the top spot in DVOA. Justin Tucker missed from 48 yards and had a 50-yard attempt blocked in Cleveland, dropping his percentage for the season to .853, which would be tied for the second worst of his career. They will need to find new kickoff and punt returners with Duvernay, who had struggled lately, out for at least four games.

The Falcons rank seventh in special teams DVOA. Avery Williams is a top-notch punt returner, and Patterson returned a kickoff 103 yards for a touchdown in Week 11. Kicker Younghoe Koo has made 24 of 29 field-goal attempts, with four of his five misses coming from 50 yards or beyond.

Neither team came out of Week 15 feeling good. The Ravens played their worst all-around game of the season, and their woes in the passing game and red zone have gripped them for weeks now. Jackson’s return gives them something to look forward to, and they could clinch a playoff spot this weekend, but they know they won’t go far in the postseason if they can’t fix their offense.

The Falcons have lost three in a row and five of six, and they’ll bring a rookie quarterback to Baltimore to face one of the league’s stingiest defenses. They’re 1-6 on the road. But they do have something to play for given that they’re only a game behind the Tampa Bay Buccaneers in the dreadful NFC South.

The Ravens need at least one more win to secure a playoff spot, and they’ll benefit from a favorable matchup against a slumping opponent that doesn’t throw the ball any better than they do. We’ll see a lot of running in this one, with a far superior defense carrying the Ravens through. Ravens 16, Falcons 13