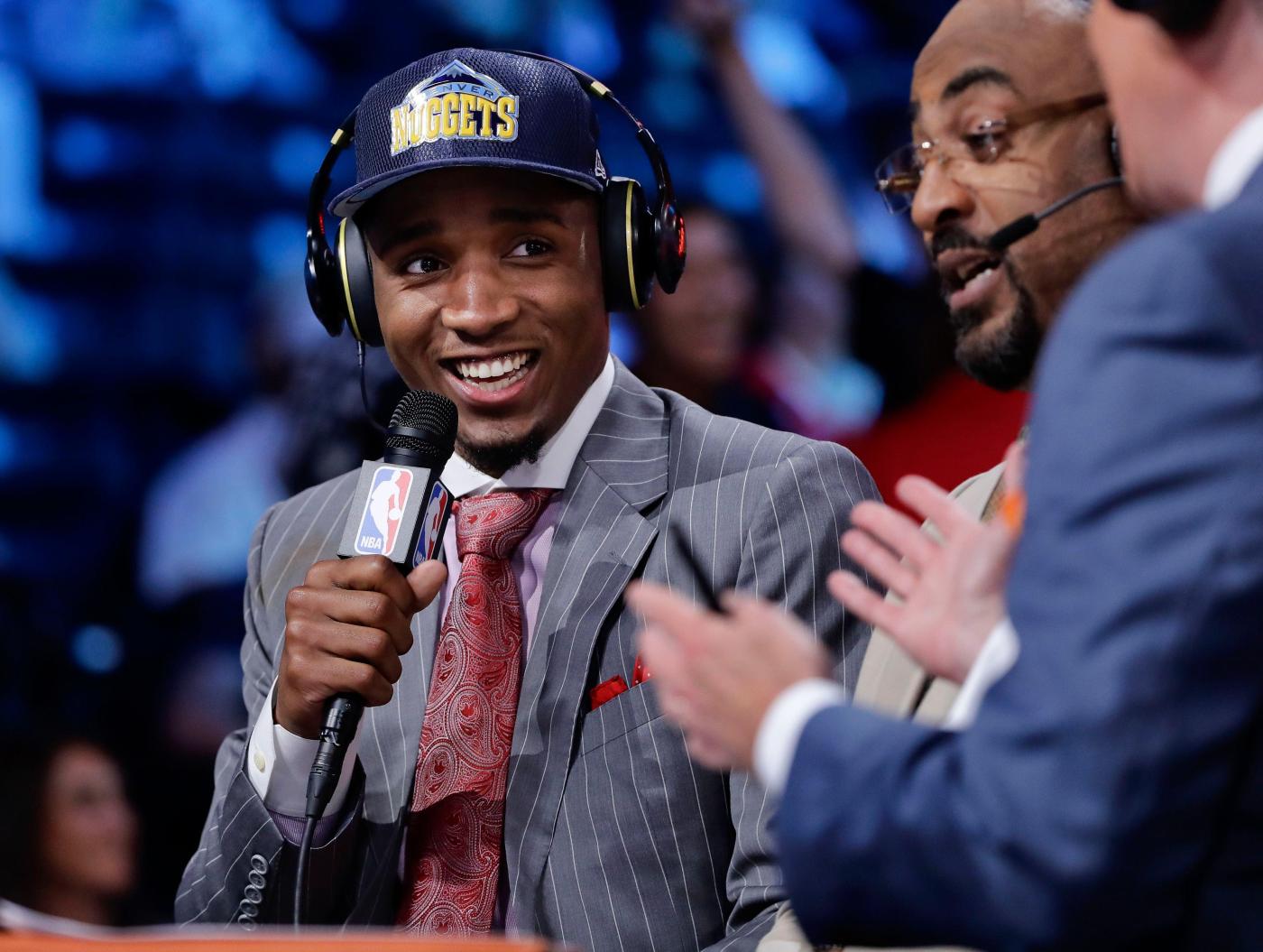 Opelika, Ala.: All the stars aligned. Donovan Mitchell longed to join his hometown Knicks, and they had 11 first-round draft choices to dangle. The Hallmark moment appeared inevitable until it wasn’t. The Cleveland Cavaliers eschewed bombast. Instead, they identified their guy and got him. Give the Cavs an A for boldness.

The Knicks will rationalize their failure: Mitchell and Jason Brunson would be a bad mix. Furthermore, he’s a ball-dominant player joining the ball-dominant Julius Randle. Like John McEnroe, I bellow, “You can’t be serious.” Randle won the 2021 Most Improved Player award, yet in the playoffs, hard double-teams flummoxed him and he fizzled and floundered. Brunson increased his market value with his improved playoff performance, albeit as the second fiddle to Luka Doncic. He’s a good player, but not close to Mitchell.

Mitchell has barbecued every playoff defense he’s encountered. In fact, his playoff average is a scorching 28.3 points per game. To win in the playoffs, a team needs a transcendent scorer. Only the most optimistic Knicks fan believes Leon Rose will use those draft choices to bring an elite player to the Knicks.

By the way, who was the last elite player the Knicks acquired? Carmelo Anthony in 2011.

Stefan Bondy described the situation as the Knicks being the Knicks. Marc D. Greenwood

Glen Cove, L.I.: After reading Voicer James Hyland’s letter, I do not believe he has any grasp of the true nature of Marxism. As for our booming fossil fuel industry, I suppose Hyland believes global warming is nothing but a hoax. Alan Rosengarten

Manhattan: It was both a joy and a sorrow to read Harry Seigel’s column “Blunter wits win when party ties trump blood” (Sept. 4) quoting Thucydides — a joy because Thucydides is so lucid in his portrayal of societal descent; a sorrow because our country is repeating the mistakes that might lead to civil war. When the rule of law is scoffed at by a brash and violent anti-intellectual minority, the center is threatened. Democracy is worth fighting for. We must honor our ancestors who have given us this unique form of government by protecting it from bullies, liars and cheats. Thucydides wrote, “The key to happiness is freedom.” The enemies of freedom must be called out. Bless President Biden for sounding the alarm. Jeffrey Cyphers Wright

Bronx: I can’t wait to see that orange, repugnant loser in an orange jumpsuit. John Cirolia

Manhattan: Can someone please tell me the name of that Black man who is always behind Donald Chump at all his rallies wearing the same “Blacks for Trump” T-shirt? He was there at all his rallies when Trump was running for re-election, right behind him on TV in every city. He’s still at it. In every city, he’s front — or I should say, back — and center of his main man. How much money is he being paid to kiss ash? Raymond McEaddy

Bronx: To Melania Trump: May I suggest you give all of your clothes touched by the FBI to charity, including what was touched in your son Barron’s room? And of course, this giveaway should be televised. Mary Caggiano

‘Hail to the Thief’

Hopewell Junction, N.Y.: Until further notice, “Hail to the Chief” will be replaced by the following, sung to the music of “God Bless America”: Someone bless America / Splinter it to bits / Stand beside her / And divide her / Via race, they’re a disgrace / Vote them out / Da-duh, da-duh. Freddy Sacco

Manhattan: Voicer Cecilia Gullas has a supposed gripe with a Housing Preservation and Development tenant having a dog in her room, so she maliciously asks, “Do animals have more rights than humans?” Well, Cecilia, ask the poor elderly carriage horse who just collapsed on an NYC street and was openly and freely beaten by the human driver who knew there’d be no consequences for his vicious cruelty. Animals have no rights, Cecilia. It’s legal to kill them for fun and sport, abuse penalties for companion animals are minimal and farm animals have essentially zero protection. Grace Luntz

Manhattan: On the subject of the much exploited and abused horses tasked to pull carriages in Central Park: I have long supported the movement to abolish the industry and send these horses to a comfortable retirement home. Although I generally love unions and union members, in this case, they are wrong to defend this disgraceful exploitation and they are offensive when they accuse us advocates for the horses of being elitist types with too much money and a hidden, unrelated agenda. It is my hope that more members of the City Council will come around, take courage and step forward to co-sponsor the pro-horse, anti-exploitation legislation that is in the works. Mark Caponigro

Manhattan: With 71% of New Yorkers favoring a ban on horse carriages, the wealthy horse carriage industry and union are desperate to change the narrative by proposing taxpayer-funded welfare reforms. However, this is the very same industry that opposed every prior measure to improve the lives of horses, including enacting temperature restrictions and maximum daily working hours for horses (1989 and 1993), installing fire sprinklers in stables (2000), increasing annual veterinarian visits, reducing working hours, requiring vacation time and a 20-year age limit (2007), increasing stall size, imposing a 26-year age limit, requiring blankets in cold weather, more comfortable tethering and humane disposition of retired horses (2010), and amending the heat restriction to factor in dangerous humidity (2019). The hypocrisy is staggering. How naive do they think New Yorkers are? Let’s focus on the issue: Horse carriages are no longer wanted here. Nathan Semmel

East Meadow, L.I.: Having “Gun-Free Zone” signs in Times Square might be as laughable as “Just Say No” signs in drug dens. Jeff Tuck

Greenwich, Conn.: I could hardly believe my eyes when reading “A Romanian glimpse at America’s post-Roe future?” (op-ed, Sept. 1) by Jenny Leon. She essentially makes the case (based on her limited sample from a small European orphanage) that babies are better off having been terminated through the barbaric procedure of abortion than being silent and limp in infancy because of unwanted pregnancies. Where is her humanity? Where is her attempt to offer solutions to this situation? Does she offer ideas? No, she coldly avers: “If the Romanian experience teaches us anything, it is that restrictions on reproductive freedoms can have horrific effects on a nation’s children.” In Leon’s world, a dead baby is better than one who can be nurtured by love and affection after he or she is abandoned by their mother. Natalie Barklow

Manasquan, N.J.: Your article “It’s a matter of principals: Outrage over departure of union executive” (Sept. 5) fails to justly defend the Council of School Supervisors and Administrators president, someone I have had the privilege to know and work with for more than 20 years. Anyone familiar with the work ethic, loyalty and fairness of Mark Cannizzaro reads this article with doubt, anger and confusion. I have known Mark as a friend, teacher, assistant principal, principal and union president. Your words “tyrannical” and “abusive” are outrageous and do not describe the man we all respect and admire. His dedication to the NYC education system has been unwavering. This non-story of a disgruntled employee is a disgrace. He is a proven man of character and loyalty. To suggest otherwise is ignorant and inaccurate. Tracy Ramire

Staten Island: As a CSA member for 12 years, CSA has been supportive of all its members. Furthermore, I have known Mark Cannizzaro in the capacity of union president and my direct supervisor. In 2010, Mark hired me as an assistant principal at IS 75, where he was the principal. Mark mentored me and supported all my decisions. He always had an open-door policy and involved all stakeholders in the decision-making of the school. Mark is a compassionate and empathetic leader who puts his staff and members first. Your article does not depict the true leader Mark is. As a current NYC principal, this article is upsetting. Donna Bonanno