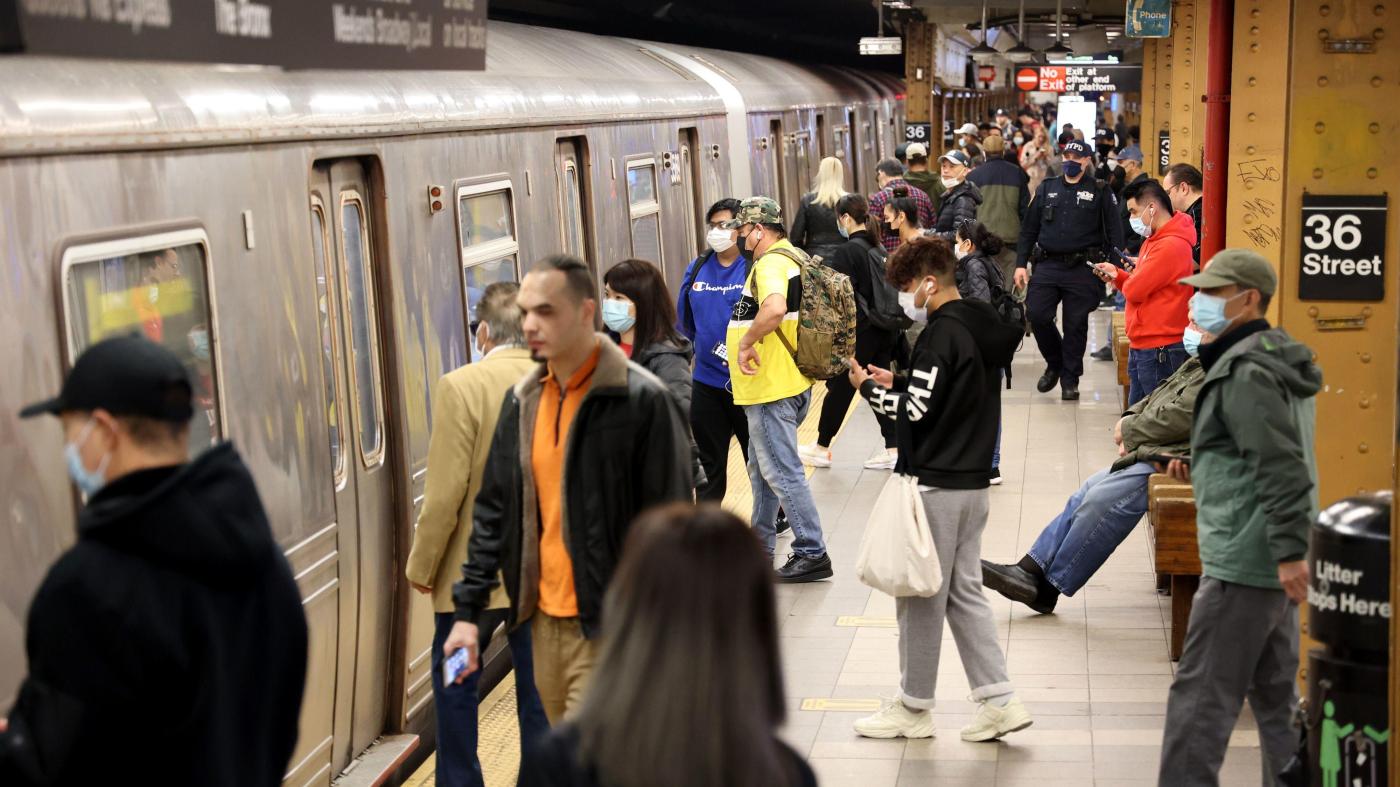 What will it take to make the subway feel safe?

Brooklyn: I took the subway recently to see a Broadway play, my first time on it in the evening since the pandemic started. On the way into Manhattan, I saw a couple of homeless people sleeping on station floors, then saw some guys so spaced out on drugs that they could barely stand. That wasn’t too bad, but on the trip back to Brooklyn, things got a little more intense.

Entering the station, I saw a young couple jumping the turnstile. They were under the influence and laughing. I told them they should pay their fare. An argument ensued, and the young guy threatened to hit me (I am 79). On the train, a woman dragging a suitcase repeatedly walked back and forth through the car talking to an imaginary person. A young person dressed to the nines in a very skimpy outfit got on, stood directly in front of my spouse and me (we were seated), and proceeded to stomp her foot the way a horse would, glaring at everyone as if daring someone to say something. Thankfully, no one took the bait.

Finally, we got to our home station. We saw three fare-beating young women walk in through the exit gate while two cops watched them and laughed. We passed another homeless man sleeping on the floor, and a couple more people spaced out at the top of the stairs.

All in all, an interesting evening! Mr. Mayor, I thought you were going to make the subways safe again. You might try eating in a little more so you can pay more attention to what’s going on. George Nader

Dobbs Ferry, N.Y.: While flying home from Indiana (a visit to my sister), I passed over NYC. It was a dreary day. The city — my city — crying. Bramhall, I would like to see a cartoon in the Daily News of the city crying, a dark cloud above it with the word “CRIME” and below the city: “PLEASE HELP ME.” Randy Jurgensen

Bronx: Let us not forget that the conditions causing the Venezuelans to come here seeking asylum were caused by the United States government’s attempts to overthrow the president fairly elected by the people of Venezuela and to install as president someone who didn’t even run. W. Twirley

Manhattan: Were the Yankees going anywhere after their July-August swoon that pilloried and perturbed all of New York, especially all real Yankees fans? Plus, here’s the thing about Aaron Judge: His post-season death knell of strikeout after strikeout proves he’s so dumb as to never learn from his batting mistakes. I heard many post-final-ALCS-loss analysts point fingers — especially the lucid David Cone — at Aaron Boone’s idiotic Gerrit Cole ouster in game three for lame Lou Trivino, who doesn’t deserve to shine my shoes. Boone had in his bullpen Clay Holmes, Jonathan Loaisiga and Wandy Peralta. So he made the season-ending blunder of taking out our ace Cole for a minor-league arm! Judge long ago lost his captainship and will go to the San Francisco Giants, who will blow him away with big money in hopes of recapturing steroidal Barry Bonds’ glory to fill the stands with home-run-loving fans. I stand by my prophetic words. Mitch Corber

Ocean View, N.J.: Roger, your refs tried their best to give the Jacksonville Jaguars a victory on Sunday afternoon — four penalties on the last drive of the game against the Giants. They should be fired and investigated for whether any of them had any money on the game, especially the one who called the penalties. Jim Fusco

Brooklyn: With all four major sports in action, I would like to take a moment to recognize the diversity of the Daily News sportswriters, all of whom are people of color, women or members of the LQBTQ community. Kudos to this newspaper for having a team that reflects the diversity of the city and the teams they support. Joe Ferra

Manhattan: I think the reason cops always plead the Fifth (like the 376 bad cops in Uvalde, Texas) is that none of their lies make any sense. Look at their evil talking point that George Floyd died from a drug overdose (let’s kneel on Derek Chauvin’s neck for nine minutes and see what happens). If they are right that Floyd died of an overdose, then all four cops on the scene would have to do time in prison for not rushing a dying American to the hospital and not trying to save him (how does kneeling on a dying person protect or serve them?). That would be literal murder, not manslaughter, because they knew they were not racing him to the hospital. Go back to total silence, bad cops! Larkin Novak

Brooklyn: Lee Zeldin pledges not to mess with women’s abortion rights if elected New York’s governor. Seems I (as well as millions of others) heard a similar pledge somewhere else. Yes! Those four Supreme Court justice Republican candidates swore that Roe v. Wade was sacred — the law of the land, never to be touched. Guess what? Yep, Roe’s overturned. So, we’re expected to believe a Ratpublican, anti-abortion, Trump-supported, voted-to-overturn-the-election congressman that New York women’s abortion rights are perfectly safe if he’s elected? Yeah, no! Kevin Hanley

Manhattan: Mark Green was certainly right about many issues in his Sunday op-ed (”Democrats’ closing pitch,” Oct. 23). But he did list a number of social progress issues he said were opposed by Republicans from the presidency of FDR to President Biden. One issue mentioned was environmental protection laws, many of which were actually passed under Richard Nixon. That includes the Environmental Protection Act, the Clean Air Act, the Marine Mammal Protection Act and the Endangered Species Act. Our earliest environmental protection laws were actually passed under FDR’s relative, Theodore Roosevelt. He passed laws to protect our national parks. Donald Trump did everything he could to eliminate many of those laws, but not all previous Republican leaders were anti-environmental protection. Sue Deutsch

Redondo Beach, Calif.: With Donald Trump’s Boeing 757 back in the air, does this mean it is preparing for a trip to another country? John Chevedden

Brooklyn: Voicer Margo Kent said Trump “created all his own problems” — you mean like a failed bail system, a dozen eggs nearing $10, a subway system that parallels the streets of Ukraine or Letitia James’s myopic preoccupation with Trump? Remember, Ms. Kent, all of the aforementioned was the byproduct of our current administration. Ron Goldman

Forest Hills: So Dwayne “The Rock” Johnson declined (again) to run for major public office to save us from Dem-publican liars and losers on both sides — so he could instead make total-garbage movies like “Black Adam”? The DC Extended Universe is so inept that they even took the always-lovable Rock and made him boring! Maybe Dwayne should run for president — of Warner Brothers! Mr. Rock, you can be president of the United States and still make movies, FYI. In fact, there’s no rule saying you have to put in even one hour a week to do presidential stuff. Your cabinet and staff do all the work. The POTUS is mostly a mascot. Thinking the president runs America is like thinking Ronald McDonald runs McDonald’s, goes the proverb. Dwayne 2024! And none of these big celebs (Tom Hanks!) can use skeletons in their closets to avoid running — McDonald Rump changed that standard forever! Jim Ranium

Hopewell Junction, N.Y.: When asked how bad the recession is going to be, I’m waiting for the first economist to say, “Just think of Art Garfunkel’s hairline.” Freddy Sacco

Sees it all the time

Whitestone: The photo of the unicyclist on Second Ave. was described as an atypical sight (”A unicycle rider takes the high road in East Village,” Oct. 22). I disagree! Notice, please, that he is cycling in traffic and not using the bike lane. Very typical, and hazardous to him and the drivers with whom he is supposed to share the road. Phyllis Rosenthal