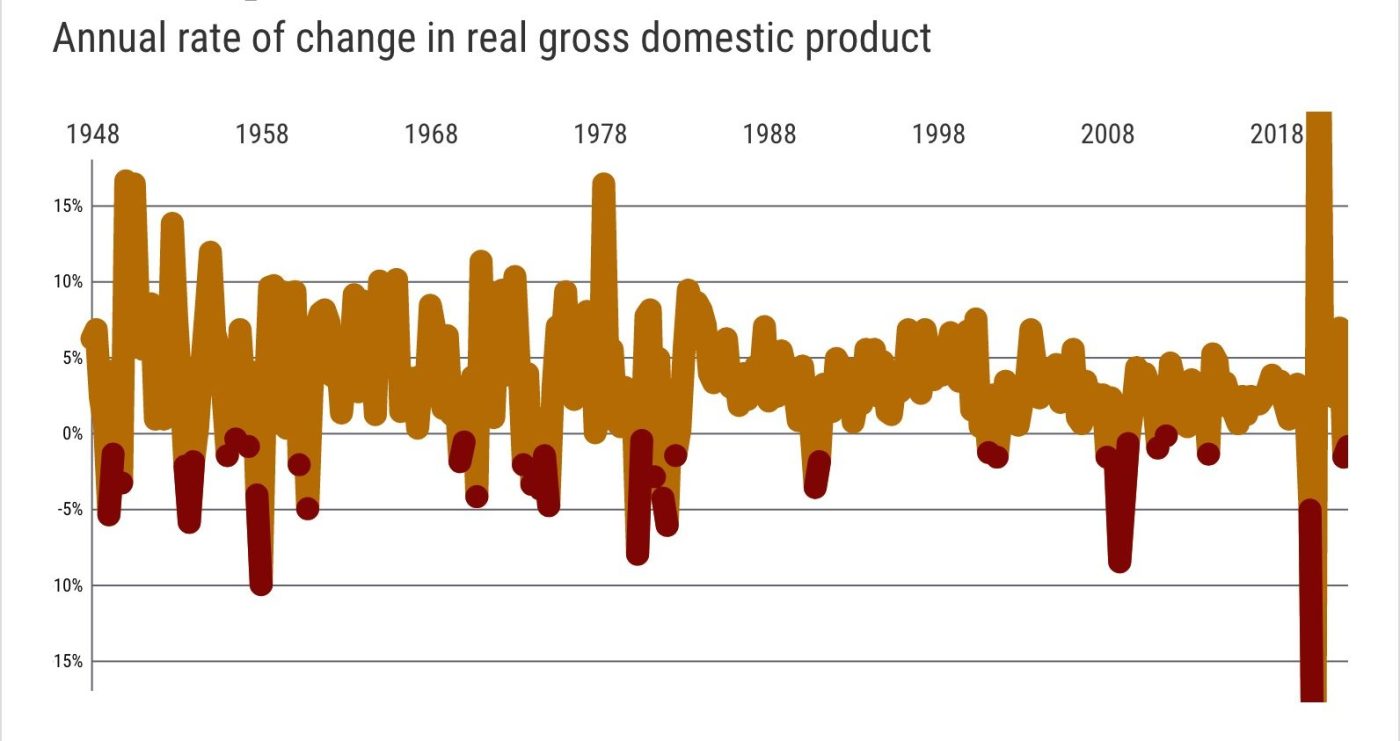 “Memory Lane” takes a stroll through financial history because the economy has a funny habit of repeating itself.

Buzz: “Recession or not” is the hot debate after the widely watched U.S. gross domestic product fell in back-to-back quarters. It’s only the 11th time such consecutive contractions have occurred since 1949. Except there’s a historical “but” in the data — the year’s first-half job growth easily exceeded that seen in the previous 10 double-dips.

Source: My trusty spreadsheet compared the average economic performance in these 11, six-month periods with double-dips in GDP, a broad measure of the nation’s economic output (adjusted for inflation). We looked at GDP, unemployment, job growth wage increases (for goods-making workers), and inflation by the Consumer Price Index — all using annualized changes.

Fueling the declines were several factors, including the end of many of the pandemic’s economic stimulus programs, the Federal Reserve chilling an overheated business climate, consumers and corporations adjusting to high energy prices, and certain industries pulling back as spending patterns morph from red hot to a calmer, new normal.

Why is Federal Reserve ruining US economy with rate hikes?

However, let’s note we’ve had no decision from the “official” arbiters of U.S. recessions. That’s a group of private-industry analysts from the National Bureau of Economic Research who’ll review a wide range of business stats in the coming months.

We also learn that this year’s economy — January through June — suffered a mild stumble compared with 10 other periods of consecutive GDP contractions.

Let’s take a stroll down Memory Lane and the previous 10 double-dips. Portions of these dips were eventually deemed part of an “official” recession …

1949: The end of the post-World War II spending boom ended with two consecutive GDP drops averaging 3.4% annual declines. These six months saw 5.3% average unemployment and job losses at a 1% year-over-year pace. Wages were rising at a 7.7% annual rate vs. inflation at a mere 0.5%.

1991: More Middle East tensions and the collapse of the U.S. savings and loan industry were backdrops for a 2.8% GDP dip with 6.4% unemployment and stagnant job counts. Raises of 3.2% trailed 5.8% inflation.

2008: A global real estate and financial meltdown pushed GDP down 5.3% as joblessness ran 6.4% with 1.3% job losses. Raises of 3.9% beat inflation at 3.4%, but the GDP losing streak eventually grew to four quarters and the Great Recession.

The rarity of back-to-back GDP flops — just under a dozen in nearly three-quarters of a century — makes for legitimate unease over 2022’s “whatchamacallit” cooldown.

To me, it feels like a good time to boost the rainy day fund and avoid big risk-taking. It might even be a bad time to buy a home, especially at today’s current asking prices.

Yet this year’s cooler-but-still-robust job market to date is the big “it’s different this time” hangup to any “recession” designation.

That’s not an economic technicality. It’s a tangible benefit to the nation’s worker bees.

And these worker-friendly conditions could help ease the financial pain of those already getting hurt in recent economic turmoil.

Two “official” post-World War II recessions called by the bureau did not have consecutive GDP contractions — 1960 (a slump tied to John Kennedy defeating then-Vice President Richard Nixon for the presidency) and 2001 (a downturn highlighted by the 9/11 terror attacks and the dot-com flop).

Jonathan Lansner is the business columnist for the Southern California News Group. He can be reached at [email protected]