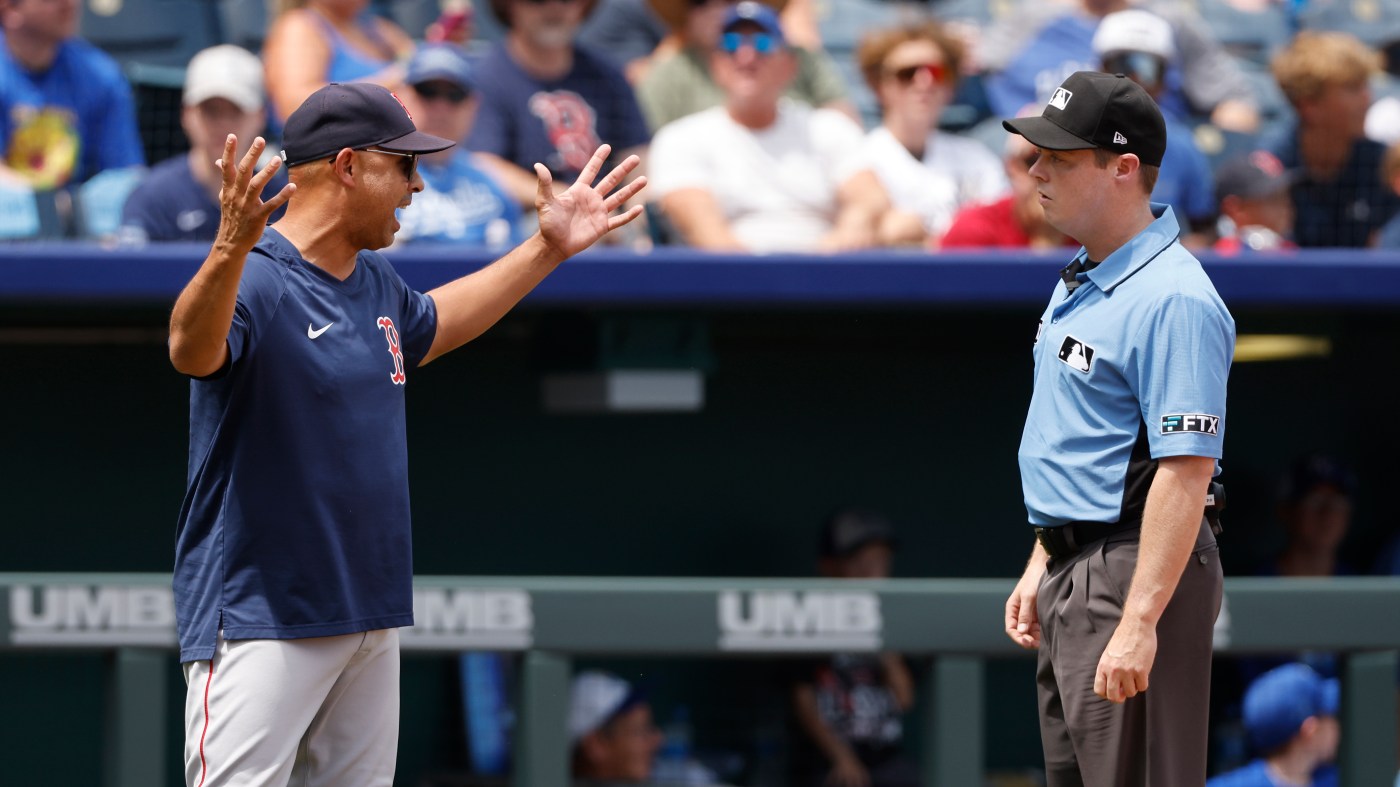 This was the danger of the Red Sox’ confusing trade deadline strategy last week.

While being half-in, half-out of the 2022 season, the Sox held on to most of their players with expiring contracts, but didn’t make enough upgrades to their current team to put themselves in contention.

This weekend in Kansas City, the Sox’ issues that went unaddressed – and two new problems they created – led to a disastrous series loss against a weak Royals team that had no business steamrolling the Sox’ $240-million roster.

Sunday’s 13-5 loss was the onion-flavored icing on the moldy cake.

Jarren Duran looks completely lost in center field. He was once again blinded by the sun on a routine flyball and made two additional bad reads as he continues to struggle in a key position.

And it’s hard to blame the player.

He’s a converted second baseman who has done his best to learn on the fly, but made a mess of the outfield for a majority of his 81 days on a big league roster. Still, the Sox have said they see him as their future center fielder and continue to put him out there on a daily basis.

They’re so committed to Duran that he stayed in center while Gold Glover Jackie Bradley Jr. was playing right field, then the Sox straight up released Bradley this week because they felt it was better for their “roster configuration.”

It’s one thing to lose a ball in the sun. Every big leaguer has done that at some point. Duran has now lost balls in the sun and in the twilight, and they’ve led to a pair of the worst losses of the season, a 28-5 loss to the Blue Jays on July 22 and then Sunday’s lopsided loss to the Royals.

The main concern is this: the Red Sox don’t seem worried about it.

Talking to reporters in Kansas City, manager Alex Cora excused Duran’s mistake an said “been there, done that” and “there’s nothing he can do there.”

Pressed on the issue as a reporter rightly noted that Duran made other bad plays that had nothing to do with the sun, Cora said this: “He’s our center fielder right now. We trust him. This is a kid that’s part of what we’re trying to accomplish and we’re going to keep rolling with him.”

Duran wasn’t supposed to be the everyday center fielder, but a long-term injury to Kiké Hernandez has resulted in Duran stepping in as the regular guy there.

He looked better at the plate over a two-week stretch in June, but over his last 104 plate appearances he’s hitting just .157 with 37 strikeouts.

Bradley was just as bad at the plate, but at least with him the Sox would have Gold Glover in center field.

Here’s the issue: the Sox aren’t playing for 2022. They’re playing for long-term success, and they’re coming up empty in the short-term.

They had to trade flame-throwing left-hander Jake Diekman to the White Sox for Reese McGuire on Tuesday because they needed a catcher.

They needed a catcher because they traded their starting catcher, Christian Vazquez, to the Houston Astros for a pair of mid-tier prospects.

So now they’re without their two best lefties, Diekman and Matt Strahm, who is on the injured list.

When Cora needed a lefty in a tie game on Thursday, he turned to Darwinzon Hernandez, who was just called up from Triple-A Worcester to take Diekman’s spot in the ‘pen. Hernandez blew the game and the Sox lost, 7-4.

Again Cora needed a lefty and turned to Hernandez in a close game on Sunday, and again he struggled, walking four guys in a six-run eighth inning that sealed the series win for the Royals.

“He needs to get better,” Cora said of Hernandez on NESN after the game. “He did a good job in Triple-A, but right now, these other lefties we have, we have to figure it out. They’re going to be part of it. We went from three lefties or whatever we had to this.”

Not only did the Sox fail to address their needs in the bullpen, they created new ones by trading Diekman and Vazquez, and by releasing Bradley.

They could’ve used all three of them this weekend.

Now the Sox are back to 4-1/2 games out of a Wild Card spot with the Braves, Orioles and Yankees on the schedule at Fenway Park this week.

FanGraphs gives Cora’s crew a 17% chance at making the playoffs. It seems generous.