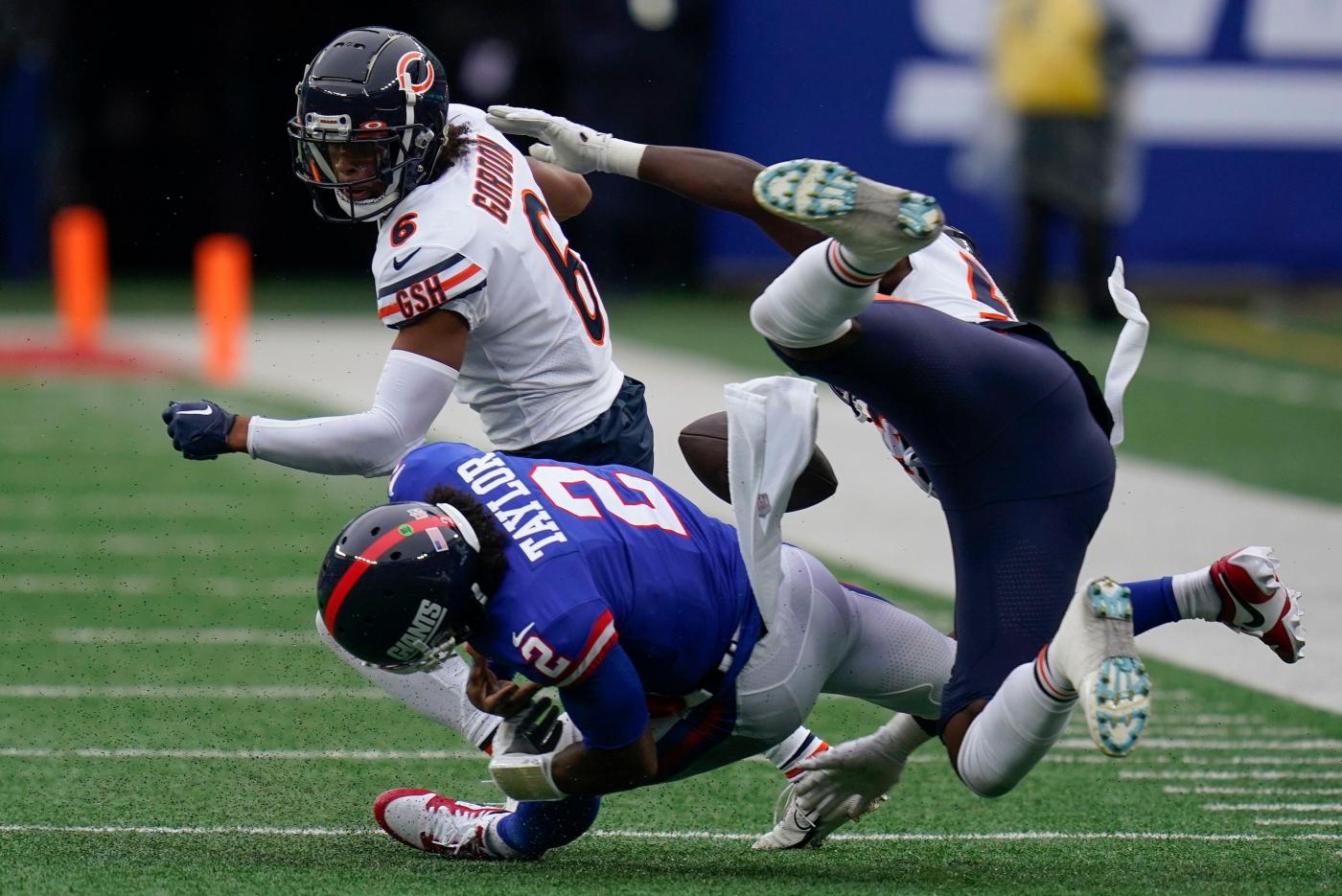 The NFL’s enhanced vigilance enforcing its concussion protocol was on full display on Sunday at MetLife Stadium, just three days after the Tua Tagovailoa Miami Dolphins catastrophe in Cincinnati.

Referee Carl Cheffers ran over to shaken Giants quarterback Tyrod Taylor in the fourth quarter and pointed him off the field for evaluation immediately after Taylor was smoked in the head by Bears DB Kyler Gordon on a scramble near the sideline.

The Giants medical staff took Taylor to the blue tent and into the locker room for evaluation and confirmed a concussion. Taylor had been in the game, seeing his first snaps as a Giant, after Daniel Jones had sustained a left ankle injury.

“It’s a scary play,” Jones said of the huge hit on Taylor. “Obviously it was a big collision there by our sideline. I didn’t see him before he went in, but I saw him after the game. Scary play. You don’t want to see that for a teammate or anybody playing.”

Prior to Taylor’s injury, the NFL’s concussion spotter at MetLife Stadium already had stopped the game with 12:27 remaining in the second quarter to send Giants safety Julian Love off for a check that revealed a concussion, as well.

Love had appeared shaken up after taking on Bears RB Trestan Ebner in a big one-on-one collision on the outside.

Love initially looked like he was trying to stay in the game, but two referees escorted Love to the sideline. And the Giants’ medical staff took Love into the locker room, evaluated him and confirmed a concussion.

“Will be back soon,” Love tweeted postgame.

This is how the process is supposed to work.

The NFL and players’ union already announced they are making “modifications” to the concussion protocol in the wake of the mishandling of Tagovailoa’s head injury last week against the Buffalo Bills.

And that put every team and spotter on notice entering Sunday’s game.

Meanwhile, there was also an example of a Giants player being checked for precautionary reasons and returning to Sunday’s win.

Giants running back Matt Breida looked woozy after making a tackle on a kickoff return in the third quarter. He got up slowly, grabbed his helmet and shook his head as he slowly jogged to the sideline.

To the Giants’ credit, one trainer alertly and immediately grabbed Breida when he came to the sideline and called over a couple others to evaluate Breida’s head, neck and motor skills out in the open in front of the bench.

Breida said after the game that they were checking for possible symptoms, including dizziness, but he was all clear. He said they determined he was simply tired and had a stinger in his neck/shoulder area. So he stayed in the game.

Breida said he had a friend in college whose career was cut short by concussions, and he would never try to push through if he didn’t feel right.

“I wouldn’t play with a concussion,” he said. “There’s more to life than football.”