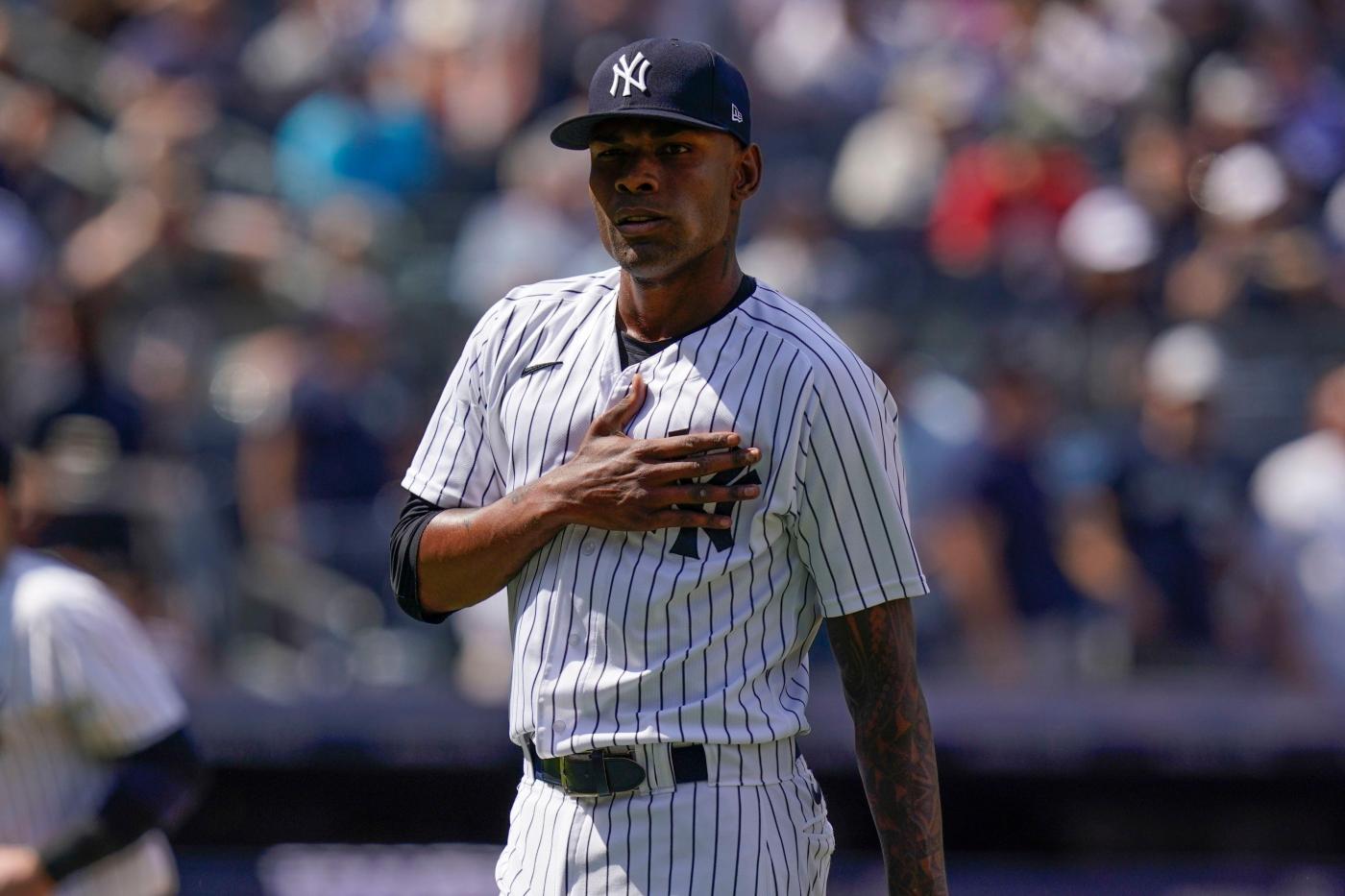 The wreckage keeps piling up in the Yankees’ bullpen. One day after saying Miguel Castro would need some time on the injured list to deal with a shoulder issue, manager Aaron Boone gave some more clarity on the righty’s situation.

“Castro, as of right now, will be a no throw for up to four weeks,” Boone said. “He’ll be re-evaluated after two weeks. But it’s going to be at least a few weeks of no throwing. It’s a shoulder strain.”

Instead of bringing up another pitcher to take Castro’s spot on the roster, the Yankees elected to call up outfielder Tim Locastro. That gives the Yankees just seven relievers on the active roster, one fewer than they and most teams typically like to carry. Of course, with the All-Star break just two days away, this current iteration of the roster is sure to be temporary.

But with unproven relievers Ryan Weber and Albert Abreu now potentially having to get some big outs during this Red Sox series, and the immense struggles of Aroldis Chapman as of late, the relief corps does not look like it belongs to a team that’s 34 games above .500. Boone explained why the team called Locastro up rather than adding another arm to help their most depleted unit.

“Just roster wise, that crunch and who’s available, fresh arms and things like that, it just felt like he gave us a little bit of depth,” he said. “He’ll be in a bench role here going into the break.”

The Yankees also have Tyler Wade at Triple-A now after swinging a trade with the Angels to bring him back. Boone provided only a short answer when asked why Locastro got the call instead of Wade, who was a major part of the team’s bench in 2021.

“Timmy’s in line for this, and the roster plays a role.”

Locastro appeared in 15 games for the Yankees this season before an oblique injury took him out. He hit .231 and used his otherworldly speed to steal four bases. Wade, meanwhile, hit .218 for the Angels with eight steals in 67 games, bouncing between second base, third base, shortstop and each outfield spot.

SEVERINO DOWN, GERMAN UP SOON

Luis Severino will have some time on his hands in the next 14 days. The Yankees have given him instructions to not throw a baseball.

“It’s probably going to be a two-week no throw,” Boone said before Saturday’s game. “That could get sped up based on symptoms and everything, but we’re probably looking at that. We’re pretty optimistic that this is something we’ll be able to get through.”

Luckily, Domingo German is all but ready to join the big-league team again. German, 29, has not pitched for the Yankees at all this season because of impingement syndrome in his right shoulder. Over the last month, though, he’s been pitching again. Starting in Single-A and working his way up to Triple-A, German has made five starts since June 22. On Friday night, he went six innings for the first time, allowing three hits and no runs to the Reds’ Triple-A affiliate. German only struck out one hitter in that outing.

Boone was questioned about the plan for German, who by all accounts is going to be in the big leagues after the All-Star break.

“We’ll see, potentially he could slot in and start after the break,” Boone said. “He could be that long man [in the bullpen], he had a really strong outing last night. I think he got up to 65 pitches. He should be north of that moving forward. I could see a couple different roles for him: potentially going right into the rotation or serving a bullpen role. We’ll see.”

Boone also said that it will probably be Jordan Montgomery and Jameson Taillon starting the two games of the team’s doubleheader in Houston on Thursday, July 21, their first action after the All-Star break.

GALLO GETTING A BREAK

By now, you know how bad Joey Gallo has been at the plate. A .161 average and .327 slugging percentage — particularly stomach-churning considering power is the main thing Gallo brings to the table — make you feel for the guy. While his defense is a consistent positive, his 81 wRC+ makes him the 23rd-worst hitter in the league (minimum 250 plate appearances).

Gallo was not in the Yankee lineup on Saturday and might not be on Sunday either, as Boone explained that there’s only so much playing time to go around. While he didn’t say this outright, getting Gallo into the lineup isn’t exactly a priority at the moment.

“With [Aaron] Hicks being back, and [Matt] Carpenter earning more opportunities there, wanting to DH Stanton [on Saturday], there’s only so many spots,” Boone said. “He’s a big part of the team. We want him to keep grinding through it. His defense certainly will be in play for us later in the game tonight.”