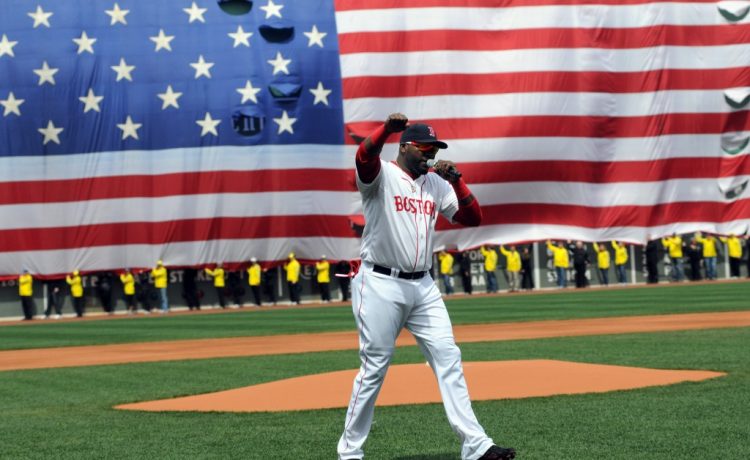 David Ortiz was one of the best ever with a bat in his hands, which is why he’s heading to Cooperstown this weekend. But he was also a Hall of Famer with a microphone in front of him.

When he’s inducted into the Hall of Fame on Sunday, the chances are high Ortiz will say something memorable during his speech. Whether it was during clubhouse interviews or on camera, the Red Sox legend was never shy about speaking his mind throughout his career. It was what made Big Papi, well, Big Papi.

With his induction now just days away, here’s a look back at some of the funniest and most memorable quotes of Ortiz’s career – in no particular order.

With 541 career home runs – 17th on the all-time list – on his resume, one may think Ortiz had a complicated way of hitting. Not so fast? As he began to produce a monster 2006 season that included a career-high 54 homers, Ortiz explained his methods.

There weren’t a lot of situations when Ortiz created runs with his legs. But in a Red Sox win over the Twins in 2011, Big Papi was a different character. As Ortiz slid home for a play at the plate, Twins catcher Joe Mauer dropped the relay throw, prompting this line.

“I think he heard the big elephant coming,” Ortiz said. “He was shaking when I was coming in.”

Ortiz certainly didn’t like it, but he was frequently tested for steroid use as MLB began trying to crack down on use of performance-enhancing drugs. In typical Ortiz fashion, he had a quip for that, too.

“They pick me every time,” Ortiz said (via the Globe). “I don’t know why. I don’t know if it’s because I’m a big guy, or what, but all I know is all they are going to find is a lot of rice and beans.”

It may have been his last season, but Ortiz, then 40 years old, was still doing amazing things with his bat. During batting practice at Fenway Park before a game against the Twins, he hit a home run that connected with Pesky’s Pole – and somehow got lodged in the pole.

“You’re only going to see a bad (expletive) like me doing that,” Ortiz said afterward (via MassLive). “You have to hit the (expletive) out of the ball for that (expletive) to happen.”

Before they became Red Sox teammates, Ortiz and David Price – then with the Rays – had a “war,” as Ortiz described it. The feud started in Game 2 of the 2013 ALDS, when Ortiz hit two homers off Price – the second of which he admired, which irked Price. The next time the two faced each, in May 2014, Price plunked Ortiz.

After the game, Ortiz went on a rant against Price.

“First at-bat of the season against him, he drilled me,” Ortiz said. “That means it’s a war. It’s on. Next time he hits me, he better bring the gloves on. I have no respect for him no more. …

“I respect everybody in this league, and I get a certain respect from everybody. If you’re mad because I take you deep twice, I’m gonna let you know. I got almost 500 homers in this league. That’s part of the game, son.”

The two later buried their beef when Price signed with the Red Sox and became teammates with Ortiz for the slugger’s final season. But their feud was a memorable late chapter of Ortiz’s career.

Ortiz defied age as he continued to put up big numbers over the final years of his career. After hitting two homers in a win over the Orioles – which put his season totals at 34 homers and 103 RBI to that point – he was asked how he was still doing it.

“They call me Super Papi,” the 38-year-old Ortiz said. “That’s right. Put it down like that. What else?”

There weren’t any microphones nearby, but the cameras were on during Game 4 of the 2013 World Series, when Ortiz huddled his teammates around him in the dugout and rallied them with a speech that sparked the Red Sox – who were trailing the series, 2-1.

It’s not certain exactly what Ortiz said, but he did stand on top of the dugout steps and shouted, “This is our time!”

The gist of the speech: The Red Sox had come a long way to get to this stage, they were better than what they were showing and it was time to “get this job done.”

“Hey, remember, the World Series is not in months,” Ortiz said after. “It’s about 10 days. You’ve got to bring your ‘A’ game every day. It’s like I told my teammates, you think you’re going to come to the World Series every year, you’re wrong. You know how many people we beat up to get to this level? A lot of good teams. That doesn’t happen every year. It took me five years to get back on this stage. … Take advantage of being here.”

Whatever he said, it worked. Jonny Gomes hit a go-ahead homer soon after, and the Red Sox – fueled by Ortiz’s bat and words – didn’t lose again as they went on to win another championship.

Ortiz’s finest moment in a Red Sox uniform. Days after the tragic Boston Marathon bombings, the Red Sox returned home to Fenway Park, where Ortiz grabbed a mic and lifted the spirits of the city in one of the most powerful moments in franchise history – and one that cemented him as a Boston icon.

“This jersey that we wear today, it doesn’t say Red Sox, it says Boston,” Ortiz began. “We want to thank you, Mayor (Thomas) Menino, Governor (Deval) Patrick, the whole police department for the great job that they did this past week.”

Then, after a brief pause…

“This is our (expletive) city, and nobody gonna dictate our freedom. Stay strong.”