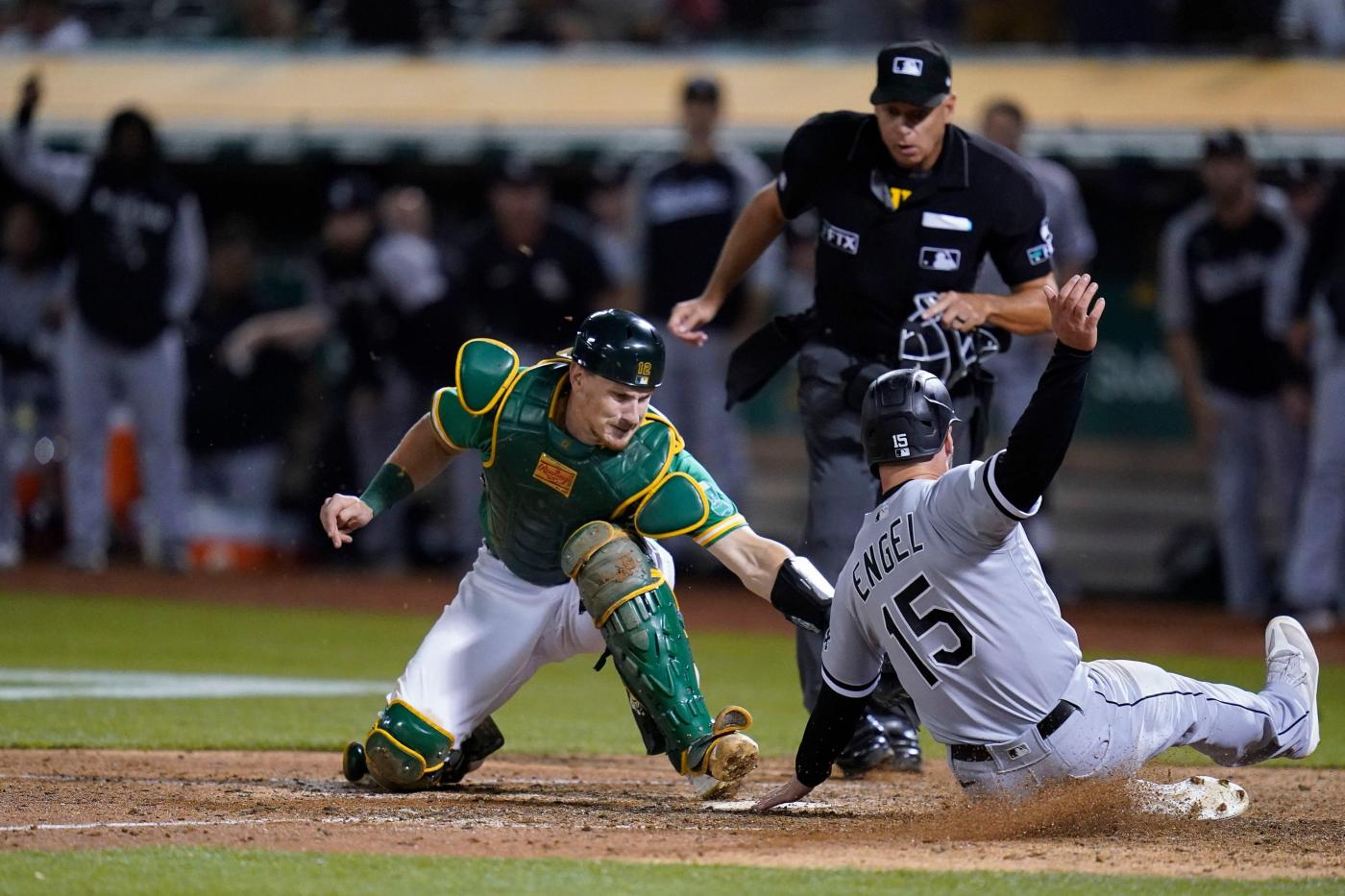 Trailing by three, the Sox scored five runs in the inning — four with two outs — to storm back and beat the Oakland Athletics 5-3 in front of 11,494 at Oakland Coliseum.

Gonzalez tied the game with an RBI single and Elvis Andrus followed with a go-ahead two-run double as the Sox completed an incredible comeback to win for the eighth time in 10 games.

“Never (give up), until the last out,” Andrus said. “Every win is a lot of fun, especially (Friday). It was a tough one. (A’s starter Austin) Pruitt threw a great ball (five no-hit innings). We didn’t have many opportunities until the seventh. It shows the resilience of this team.

“What we did in that inning was a team effort.”

The Sox didn’t have a hit until Eloy Jiménez singled to left against reliever Joel Payamps with one out in the seventh. And Jiménez was just getting started sparking the offense.

The Sox entered the ninth down 3-0, and Jiménez homered with one out against reliever A.J. Puk for the team’s first run.

“That was a big spark for the whole team,” Cairo said. “And good at-bats after that.”

Pinch hitter Yasmani Grandal walked. AJ Pollock was just out at first on a grounder hit to the second baseman Tony Kemp.

Andrew Vaughn drove in pinch runner Leury García with a single, cutting the deficit to one. Seby Zavala got hit by a pitch on a 2-2 count, putting the tying run in scoring position for Gonzalez, who had struck out his first three at-bats in the game.

Gonzalez singled to left and pinch runner Adam Engel scored just ahead of Chad Pinder’s throw to tie the game.

“I felt comfortable, considering even three strikeouts going into that plate appearance,” Gonzalez said. “I was confident in my ability, got a good pitch and put a good swing on it.

“Engel busted his butt to home, made a great slide and that tied the ballgame.”

Andrus followed with a two-run double to left on a 1-1 pitch.

“One of the good benefits of playing your old team is I know a lot of the tendencies of the pitchers,” said Andrus, who joined the Sox in August after being released by the A’s. “Especially Puk, I’ve been behind him a lot (playing shortstop), his approach to hitters in different situations.

“I had my plan and I was really glad he threw my that fastball there and I was able to put a good swing on it.”

With the victory, the Sox now stand alone in second place in the American League Central, 1½ games behind the Cleveland Guardians.

“Amazing win,” said Sox starter Lucas Giolito, who allowed three runs on five hits with six strikeouts and two walks in six innings. “Put up five runs in the ninth inning like that, it was a lot of fun to watch. Credit to the pitchers Oakland had out there, they were making a bunch of good pitches, putting a lot of pressure on us.

“I did the best I could, that Kemp (RBI) single (with two outs during a two-run fifth) was going to haunt my dreams until my next outing, but now it all washes away. I get to spit the hook out, that’s always a good feeling. Keep the good vibes going. A lot of fight in this team. Just amazing clutch at-bats. That was a fun win.”

The Sox couldn’t get anything going against Pruitt, who made his 11th career start Friday — and first since Sept. 5, 2019, with Tampa Bay — after the A’s scratched scheduled starter James Kaprielian reportedly because of a finger injury. Pruitt has 30 relief appearances this season.

Pruitt exited after throwing 55 pitches. He was replaced by Payamps, who pitched a perfect sixth.

Jiménez broke up the A’s combined no-hit bid with a single on an 0-1 changeup with one out in the seventh. Pollock singled with two outs, bringing up Vaughn as the tying run. Vaughn grounded out to shortstop Nick Allen.

The Sox got the big hits in the ninth and closer Liam Hendriks struck out one and got Shea Langeliers to ground into a game-ending double play for his 32nd save.

“We have so many good hitters who can change the game in a second,” Cairo said. “And (Friday) you saw what they could do. They had good at-bats and it happened quick.

“They believe that we can do it. We don’t give up. That’s the phrase that (manager) Tony (La Russa) uses. And that’s what we’re using right now. Never give up and 27 outs.”