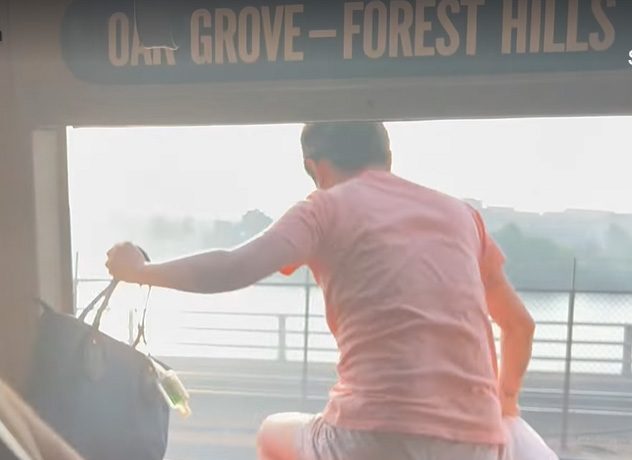 People praying amid a smokey train car. Others kicking out windows to escape amid a panic. A woman deciding simply to plunge down into the river below.

The fiasco aboard the flaming rush-hour MBTA Orange Line train on Thursday morning left riders shaken and fearing for their lives, people onboard told the Herald.

Mikaela Bartels was in the front train car with her headphones on when the flashes of light and billowing smoke suggested something wasn’t quite right.

Her car — the front of it; she was toward the back — had caught ablaze, leading someone to pull the emergency brake as the car began to fill with the smoke.

Another passenger, Glen Grondin, 42, said he heard the problem before he saw it.

“Shortly before we got to the bridge, you could hear a banging, and it kept getting louder until the final bang, which sounded like an explosion,” he told the Herald, describing people crying and confused about what was going on. “People started to panic.”

The myriad videos across social media tell similar stories. There’s one from that first car as people bail out the window, jumping awkwardly down to the gravel of the bridge below with some help from other passengers. There’s the far-away shots, the ones that show flashes of light coming from the front of the stalled subway train as black smoke rises over the Mystic River.

And then there’s the ones of the woman who made her exit from the bridge by leaping down into the Mystic. She later told WBZ that she just figured she’d be “safer in the water.”

The MBTA’s Twitter account characterized the breakdown as “a mechanical problem,” though officials later apologized for the incident and said it appears part of the bottom of the train came lose and hit the electrified rails, causing the fire under the first car of the train.

In that car, a man kicked out a window, Bartels said, and about half the car’s riders leapt — or tumbled — out through it.

“Thank God that guy did that so people didn’t have too much smoke inhalation,” she said.

Passengers figured out how to get the door open into the second car, and by that point the conductor had emerged from the front of the train and was guiding people toward the back of the train, where people got out.

She said they were grateful for the eventual help of the conductor and the T employees who guided them back to the nearby Wellington Station but could have used either more signage or information over the PA system about what to do.

“We were kind of left to ourselves,” she said.

Hundreds of people then milled around at Wellington. Bartels eventually made it home to Malden via bus.

Though she said she still plans on taking the T in the future, “I think I’m going to drive to work tomorrow.”

Grondin, the other passenger, said he’s stuck riding it.

“Unfortunately I need to get to work, but definitely my opinion of the T and its service took a big hit today — I know I’m probably gonna be stuck on high alert going forward, he said.

And P.J. Gallagher, another rider aboard the troubled train, in a later message to the Herald described similar scenes of chaos, but added, “I used to live in NJ, so I know (there are) a lot of issues with MBTA, but not as bad as NJ Transit lol.”