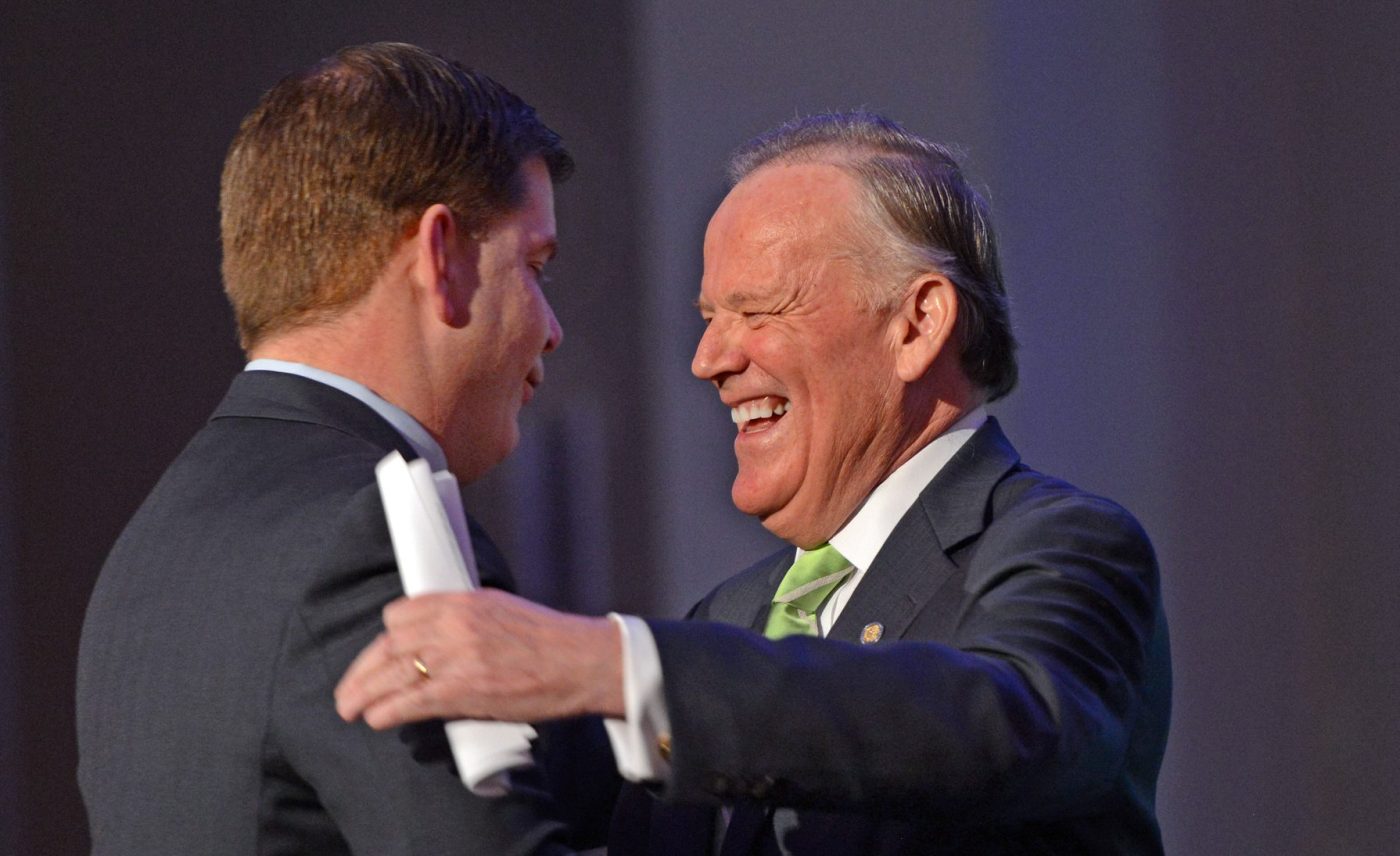 Jim Brett has a lot of admirers, and a lot of them think about him this time of year.

The longtime president and CEO of the New England Council, a powerhouse consortium of civic institutions and businesses representing the region in Washington, might otherwise be best known for modeling non-partisanship in a time of vitriol.

The former Democratic state legislator from Massachusetts, who nearly became Boston’s mayor in the early 1990s, has been the council’s steady hand for 26 years as Republicans and Democrats have rotated in and out of power in the nation’s capital, as inscrutable about his political leanings, if any, as a guard at Buckingham Palace.

But it’s a lifetime of fierce advocacy for Americans with disabilities that the thousands whose lives Brett has touched think of when they think of him. “Help someone along the way who can’t repay you,” Brett was instructed by a mother who emigrated here as a poor Irish farm girl in the 1920s and supported her family by washing floors in downtown Boston. “That will be your reward.”

Brett has followed this instruction doggedly, if unpretentiously. Apart from his mother, no one influenced him more than his older brother Jack, born with profound intellectual disabilities. The two lived together for most of Jack’s life. “Even though Jack had an IQ of 35, he became my teacher,” Brett has said. “He opened my eyes and he opened my heart.”

For decades now, Brett has been asked to drive the agendas of high-level groups established to press for dignity for the disabled. This past May President Biden asked him to once again serve as Chair of the President’s Committee for People with Intellectual Disabilities. He had previously been asked by Presidents George W. Bush and Barack Obama to serve. He’s also Vice Chair of the National Council on Disability. Year after year, Brett is everywhere, hammering away at the barriers that isolate and exclude the disabled.

None do more damage than the barriers to acceptable health care. “People with intellectual disabilities are the most medically underserved people in the world, including the US,” says Dr. Steven Perlman, a Professor of Pediatric Dentistry at Boston University’s School of Dental Medicine, nationally recognized for his work providing and promoting treatment of both children and adults with intellectual disabilities. Brett and Perlman are close collaborators in the battle to induce medical societies, medical schools and Congress to do right by the disabled. Brett calls Perlman his “mentor.” Perlman calls Brett a “true American hero for people with intellectual disabilities.” When it comes to access to medical care, says Perlman, a legend in the effort to provide dental care for the intellectually disabled, disabled Americans are “invisible.”

The two are disinterested in well-meaning chatter: there are concrete ways of changing this. Physicians receive little to no training in treating the disabled, medical facilities are not incentivized to provide care for this population, and reimbursement systems are maintained that not only do not encourage the treatment of those with intellectual disabilities but affirmatively discourage it. Group homes and assisted living facilities face staggering shortages in personal care personnel – shortages that could be reduced by targeted changes in immigration policies and increased funding. “Why are the wages so low for the people taking care of our loved ones?” asks Brett. “Some of them have to work two or three jobs. Some are on food stamps. It’s a disgrace.”

There’s been some progress. Brett, Perlman and others have forced American dental schools to train dentists to provide dental care for the intellectually disabled, who have suffered dearly for lack of it. Legislation is pending that would require the federal government more broadly to provide more favorable reimbursement rates for providers to the disabled and significantly upgrade care. But it hasn’t been enacted.

Jim Brett carries with him a picture of his brother Jack everywhere he goes. The fight for the disabled is a long one, he knows. “But it’s what keeps me going,” he says.

Jeff Robbins is a longtime columnist for the Boston Herald, writing on politics, national security, human rights and the Mideast.