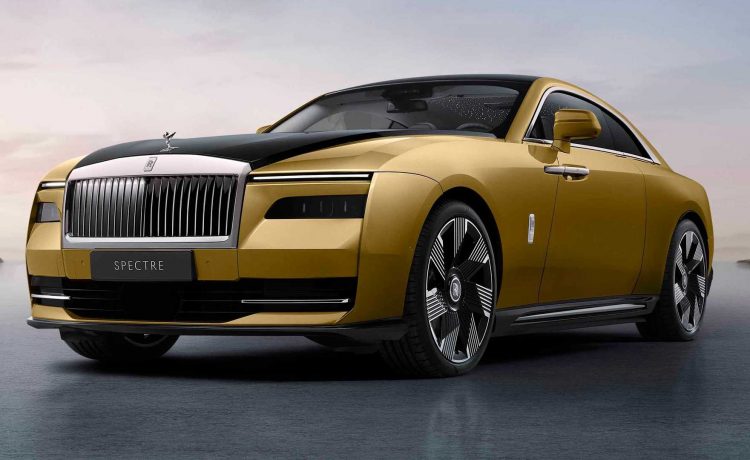 The first-ever electric vehicle from Rolls-Royce is official and they are extremely proud of the Spectre.

It aims to be the pinnacle of electric motoring thanks to, the company claims, the most exhaustive testing procedure of any car it’s ever launched – the equivalent of 400 years’ use for a Rolls-Royce.

The company’s mission is to become fully electric by the end of the decade and it believes the instant torque, silent running, and “the sense of one imperceptible gear” perfectly fit its own virtues.

The Spectre is a coupé and will be positioned as a spiritual successor to the Phantom Coupe in the marque’s lineup and will effectively take its role. Rolls claims that this car joins an entirely new automotive segment – the ultra-luxury electric super coupe segment.

Design-wise, the Spectre doesn’t look dramatically different compared to other RR products, though it introduces the widest grille ever installed on a Rolls from the factory. That grille is softly illuminated by 22 LEDs and above it is an aerodynamically optimized Spirit of Ecstasy figurine. At the rear the tapering tail features elegant LED lights set as far apart as possible, with the top of the boot lid merging seamlessly into the rear window.

Hop inside and you will see pure Rolls-Royce, but updated with clever use of the latest lighting technology across the dash, doors and, of course, the roof. There is also a completely new digital architecture named SPIRIT that controls everything from the electric powertrain to the car’s remote app, which is called Whispers.

The ultra-luxury electric super coupe uses the latest version of Rolls-Royce’s four-wheel-drive Architecture of Luxury, which caters for electric power as well as internal-combustion engines in the existing product line-up.

There’s no word yet on battery size, either, but with an expected range of 515 km (320 miles) and efficiency of 2.9 miles/kWh, that would mean a battery of around 100kWh.

These are all impressive numbers but the Spectre won’t focus on performance or efficiency. Instead, it will deliver the most luxurious feeling behind the wheel and the new Planar suspension surely helps with that mission.

The first deliveries of the new car are expected to be a year away, at the end of 2023 with pricing will sit somewhere between the Cullinan and the Phantom.