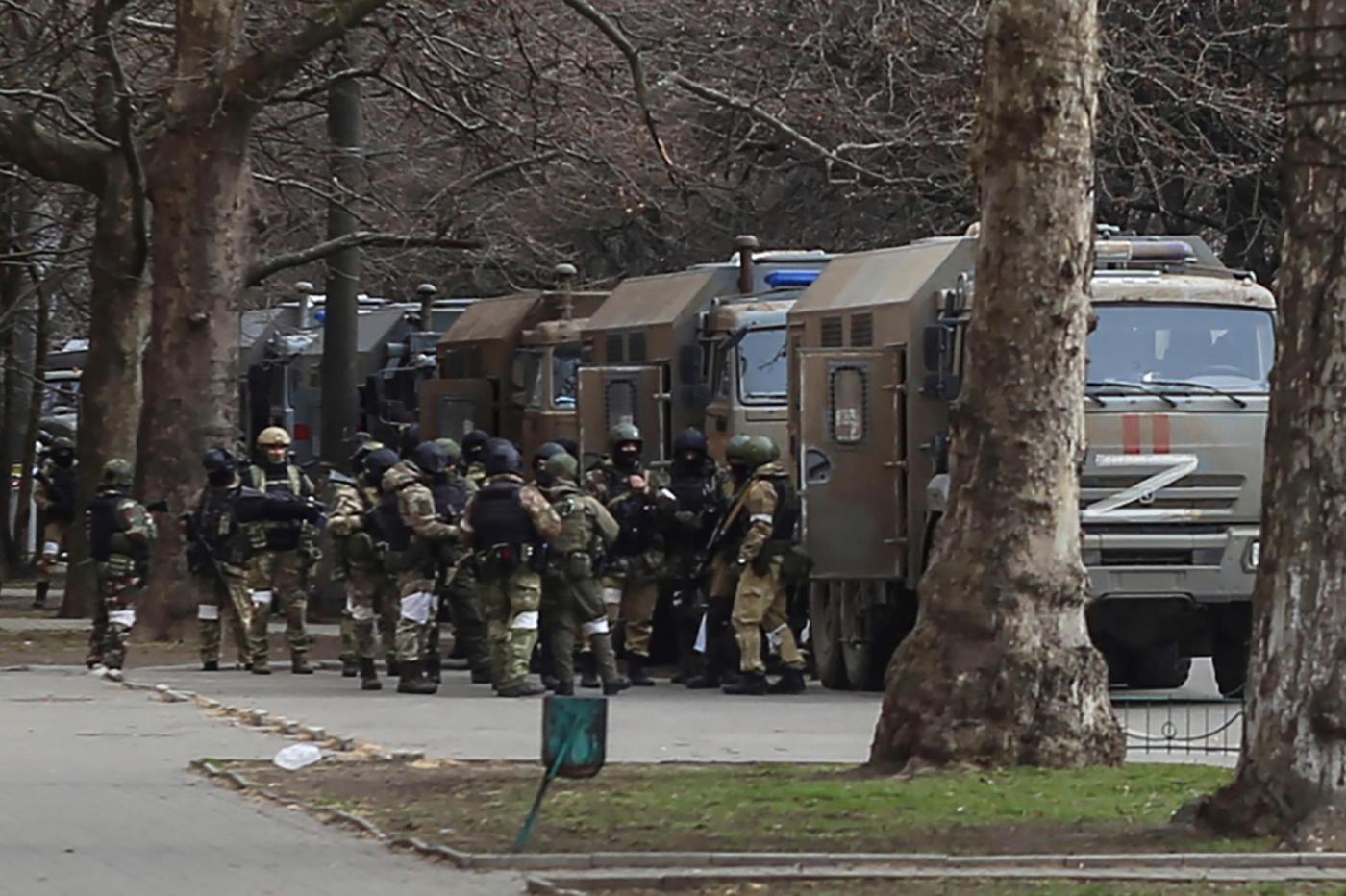 KYIV, Ukraine (AP) — Russia’s military announced Wednesday that it’s withdrawing from a key Ukrainian city and nearby areas, in what would be one of the most significant and humiliating setbacks for Moscow’s forces in the 8-month-old war.

Ukrainian authorities, however, cautioned against considering the retreat a done deal. President Volodymyr Zelenskyy has warned that the Russians were feigning a pullout from Kherson to lure the Ukrainian army into an entrenched battle in the strategic industrial port city.

The withdrawal from Kherson — in a region of the same name that Moscow illegally annexed earlier this year — would pile on another setback after Russia’s early failed attempt to capture the capital, Kyiv. Kherson, with a prewar population of 280,000, is the only regional capital Russian forces captured since the Feb. 24 invasion began.

Kyiv’s forces have zeroed in on the city and cut off supply lines in recent weeks as part of a larger counteroffensive in eastern and southern Ukraine that has pushed Russian troops out of wide swaths of territory.

Recapturing Kherson could allow Ukraine to win back lost territory in the Zaporizhzhia region and other southern areas, leading to an eventual push back into Crimea, which Russia illegally seized in 2014. A Russian retreat is almost certain to raise domestic pressure on the Kremlin to escalate the conflict.

Speaking in a stern tone and with a steely face on Russian TV, Moscow’s top military commander in Ukraine reported to Defense Minister Sergei Shoigu on Wednesday that it was impossible to supply the city of Kherson and that its defense would be “futile.”

Gen. Sergei Surovikin said that 115,000 people had been relocated because their “lives are constantly in danger,” and proposed a retreat to the opposite bank of the Dnieper River from where Kherson lies.

Shoigu agreed with Surovikin’s assessment and ordered him to “start with the withdrawal of troops and take all measures to ensure the safe transfer of personnel, weapons and equipment across the Dnieper River.”

But Ukrainian presidential advisor Mykhailo Podolyak said on Twitter: “Actions speak louder than words. We see no signs that Russia is leaving Kherson without a fight.”

Yaroslav Yanushevych, Kherson’s Ukrainian-appointed governor, called on residents “not to give in to euphoria” just yet.

As the reports of a Russian withdrawal emerged, Zelenskyy met with his senior military staff in Kyiv to discuss the situation on the front, including attempts to recapture territory, his website reported without giving details.

In addition to the successful counteroffensive, Ukrainian resistance fighters behind the front line have worked inside Kherson, with acts of sabotage and assassinations of Moscow-appointed officials.

Reports surfaced Wednesday that the No. 2 official of the Moscow-installed Kherson regional government was killed in a car crash. There was no indication of foul play — but it comes against the backdrop of prior targeting of officials.

Kirill Stremousov — a prominent regional official who posted updates about the war almost daily— died in a crash, according to Russian state news agencies and his boss, Vladimir Saldo.

The Russian Defense Ministry reported months ago that Saldo himself was poisoned and hospitalized.

In October, Surovikin appeared to set the stage for a possible withdrawal from Kherson, acknowledging the situation was “quite difficult” for Moscow. Evacuations of civilians followed, as did some symbolic moves.

The remains of Grigory Potemkin, the Russian general who founded Kherson in the 18th century, were reportedly moved from the city’s St. Catherine’s Church.

In recent months, Ukraine used U.S.-supplied HIMARS rocket launchers to hit a key bridge on the Dnieper in Kherson and a large dam upstream that is also used as a crossing point. The strikes forced Russia to rely on pontoons and ferries that Ukraine also targeted.

That disrupted supply links to Kherson and made Russian forces on the Dnieper’s west bank vulnerable to encirclement. The shortages were exacerbated after an Oct. 8 truck bomb blew up part of the strategic Kerch Bridge linking Russia’s mainland to Crimea, which has served as a major supply hub for the Russian forces in the south.

Russia wanted to hold onto Kherson and other areas west of the Dnieper so it could press an offensive to Mykolaiv and Odesa and sever Ukraine’s access to the Black Sea. Such a move would damage Ukraine’s economy and enable Moscow to build a land corridor to the separatist Transnistria region of Moldova, home to a major Russian military base.

The loss of Kherson could see painful consequences for Putin: more criticism of Russia’s military command from the country’s hawks, as well as a further decline in morale among the armed forces and stronger opposition to his troop mobilization. Abroad, China and India could see it as a sign of the Kremlin’s weakness when it needs their support in the face of crippling Western sanctions.

At least nine civilians were killed and 24 others were wounded in 24 hours, the Ukrainian president’s office said. It accused Russia of using explosive drones, rockets, heavy artillery and aircraft to attack eight regions in the southeast.

The president’s office said widespread Russian strikes on Ukraine’s energy system continued. Two cities not far from Europe’s largest nuclear power plant were shelled overnight, it said. More than 20 residential buildings, an industrial plant, a gas pipeline and a power line were reportedly damaged in Nikopol across the Dnieper River from the Zaporizhzhia Nuclear Power Plant.