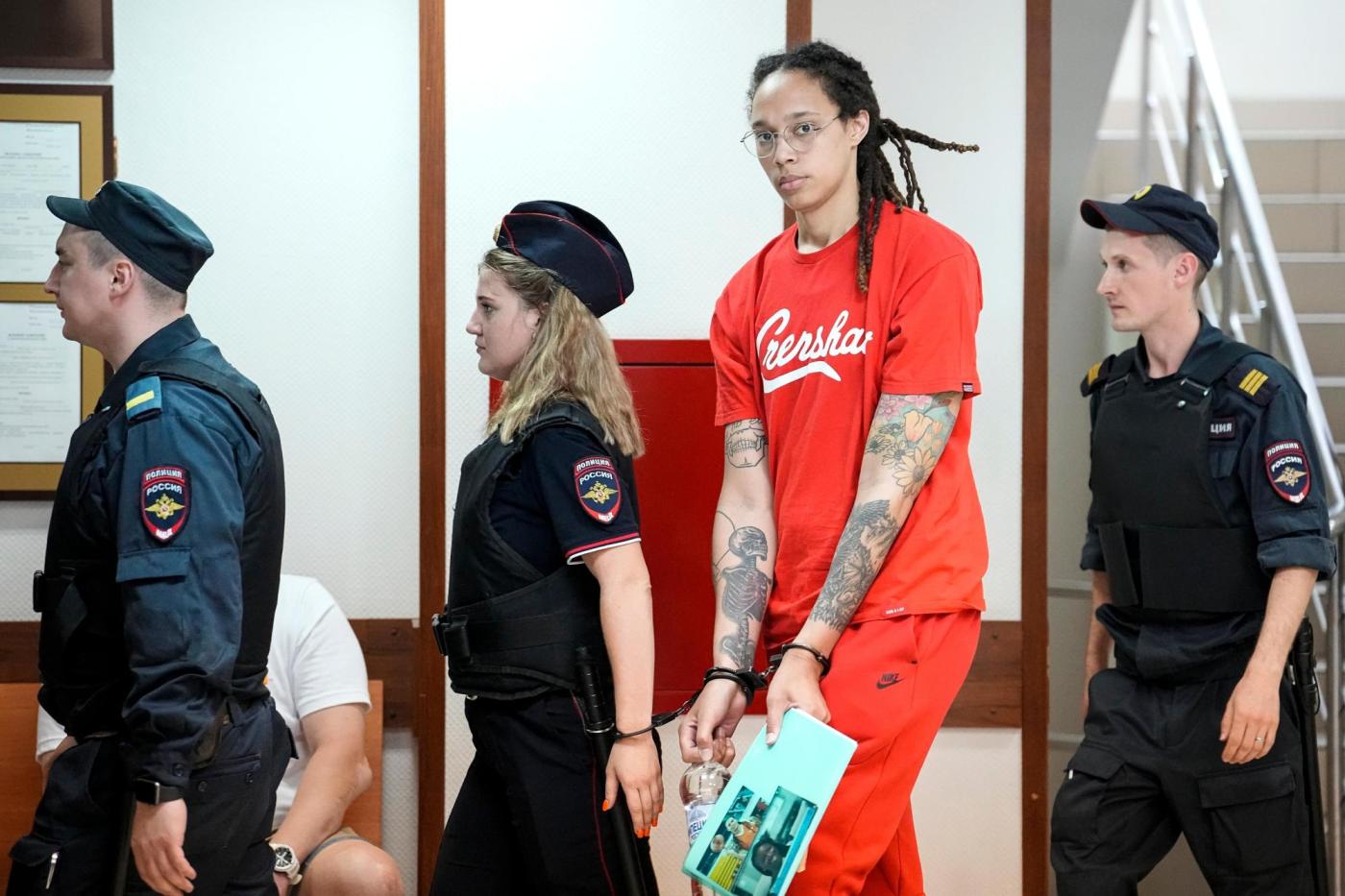 Judge Anna Sotnikova said the time Griner has served in custody since her arrest in February would count toward the sentence.

Griner reacted to the sentence with little emotion. She listened to the verdict from the defendant’s cage, a blank stare on her face.

While recapping the evidence and giving her findings Thursday, the judge said the 31-year-old Griner illegally brought drugs into Russia.

Before the unusually quick verdict was announced, Griner made a final appeal to the court. She said she had no intention to break the law by bringing vape cartridges with cannabis oil into the country when she flew to Moscow in February to play basketball in the city of Yekaterinburg.

Attention now turns to the possibility of a high-stakes prisoner swap that U.S. Secretary of State Antony Blinken proposed to Russian Foreign Minister Sergey Lavrov. Under the proposed deal, Griner and Paul Whelan, an American imprisoned in Russia on an espionage conviction, would go free.

Russian officials have remained poker-faced about a possible deal and chafed at U.S. statements about the case, saying a possible deal should be discussed through “quiet diplomacy without releases of speculative information.”

KHIMKI, Russia (AP) — American basketball star Brittney Griner illegally brought drugs into Russia, the judge at her trial ruled Thursday at the conclusion of her case that reached the highest levels of U.S.-Russian diplomacy.

The pronouncement by Judge Anna Sotnikova, prior to her announcing a verdict, appeared to herald the imminent conviction of Griner on charges of possession and smuggling of cannabis oil.

A prosecutor urged that she be sentenced to 9 1/2 years in prison.

Earlier in the session, with a conviction all but certain, an emotional Griner made a final appeal to the court for leniency. She said she had no intention to break the law by bringing vape cartridges with cannabis oil when she flew to Moscow in February to play basketball in the city of Yekaterinburg.

“I want to apologize to my teammates, my club, my fans and the city of (Yekaterinburg) for my mistake that I made and the embarrassment that I brought on them,” Griner said, her voice cracking. “I want to also apologize to my parents, my siblings, the Phoenix Mercury organization back at home, the amazing women of the WNBA, and my amazing spouse back at home.”

Under Russian law, the 31-year-old Griner faces up to 10 years in prison, but judges have considerable latitude on sentencing.

If she does not go free, attention will turn to the possibility of a high-stakes prisoner swap that was proposed last week by U.S. Secretary of State Antony Blinken to his Russian counterpart.

Griner said she made “an honest mistake” in bringing the vape cartridges into Russia, adding: “I hope in your ruling it does not end my life.”

Griner said Yekaterinburg, a city east of the Ural Mountains, had become her “second home.”

“I had no idea that the team, the cities, the fans, my teammates would make such a great impression on me over the 6 1/2 years that I spent here,” she said. “I remember vividly coming out of the gym and all the little girls that were in the stands there waiting on me, and that’s what kept making me come back here.”

Lawyers for the Phoenix Mercury center and two-time Olympic gold medalist have sought to bolster Griner’s contention that she had no criminal intent and that the canisters ended up in her luggage by mistake. They presented character witnesses from the Yekaterinburg team that she plays for in the WNBA offseason and written testimony from a doctor who said he prescribed her cannabis for pain treatment from injuries sustained in her basketball career.

Her lawyer, Maria Blagovolina, argued that Griner used the cannabis only in Arizona, where medical marijuana is legal.

Another defense attorney, Alexander Boykov, emphasized Griner’s role in taking her Yekaterinburg team to win multiple championships, noting that she was loved and admired by her teammates. He told the judge that a conviction would undermine Russia’s efforts to develop national sports and make Moscow’s call to depoliticize sports sound shallow.

Then last week, in an extraordinary move, Blinken spoke to Russian Foreign Minister Sergey Lavrov, urging him to accept a deal under which Griner and Paul Whelan, an American imprisoned in Russia on an espionage conviction, would go free.