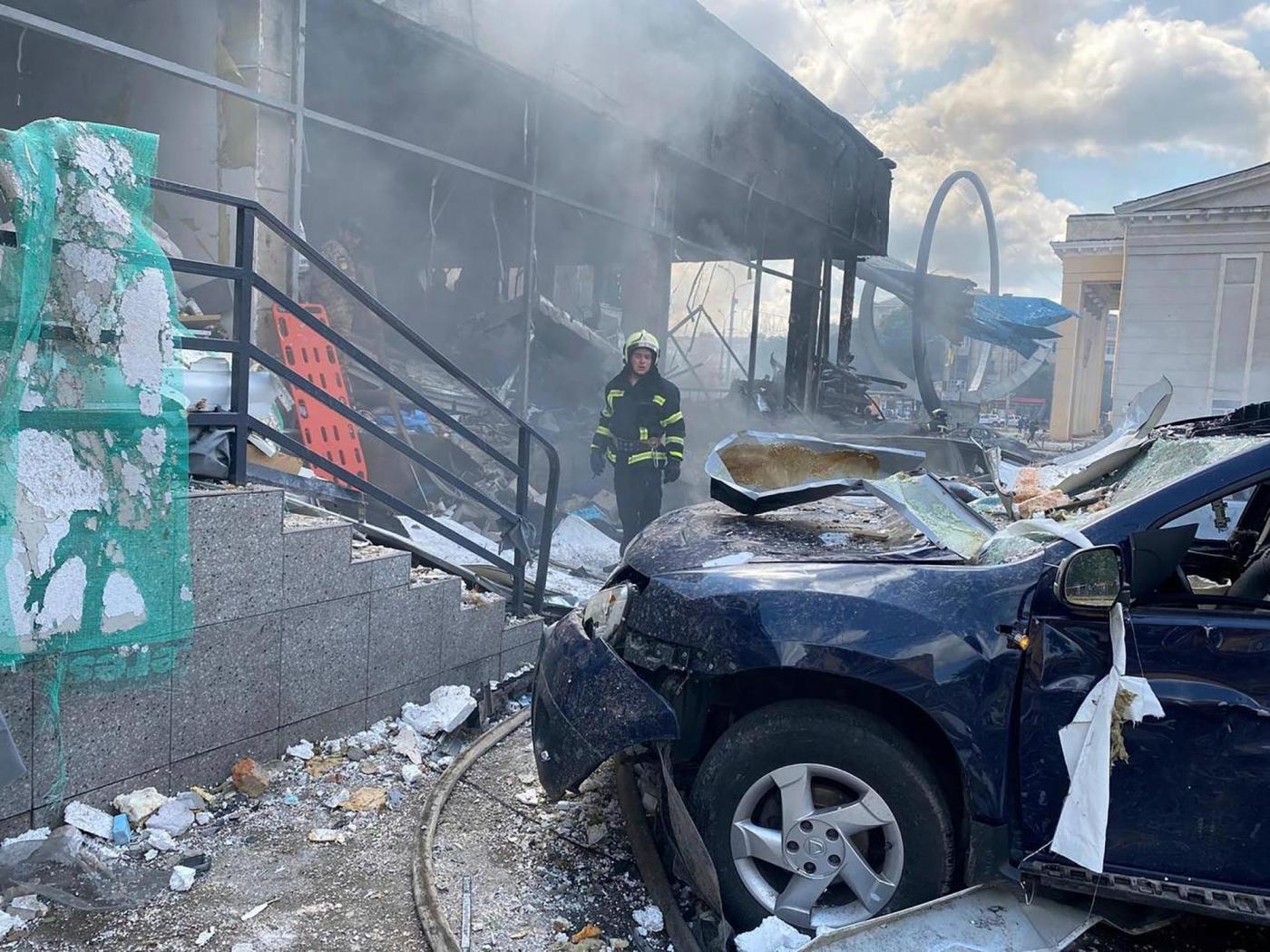 National Police Chief Ihor Klymenko said only six bodies have been identified so far, while 39 people are still missing. Three children where among the dead. Of the 65 people hospitalized, five remain in critical condition while 34 sustained severe injuries, Ukraine’s State Emergency Service said.

“There was a building of a medical organization. When the first rocket hit it, glass fell from my windows,” said Vinnytsia resident Svitlana Kubas, 74. “And when the second wave came, it was so deafening that my head is still buzzing. It tore out the very outermost door, tore it right through the holes.”

Along with hitting buildings, the missiles ignited a fire that spread to 50 cars in a parking lot, officials said.

“These are quite high-precision missiles … They knew where they were hitting,” Borzov told the AP.

Russia hasn’t officially confirmed the strike. But Margarita Simonyan, head of the state-controlled Russian television network RT, said on her messaging app channel that military officials told her a building in Vinnytsia was targeted because it housed Ukrainian “Nazis.”

Ukrainian President Volodymyr Zelenskyy accused Russia of intentionally aiming missiles at civilians. The strike happened as government officials from about 40 countries met in The Hague, Netherlands, to discuss coordinating investigations and prosecutions of potential war crimes committed in Ukraine.

“Every day Russia is destroying the civilian population, killing Ukrainian children, directing missiles at civilian objects. Where there is no military (targets). What is it if not an open act of terrorism?” Zelenskyy wrote on Telegram.

Ukrainian Interior Minister Denys Monastyrsky echoed Zelenskyy, calling the missile attack a “war crime” intended to intimidate Ukrainians while the country’s forces continue to hold out in the east.

Vinnytsia is one of Ukraine’s largest cities, with a prewar population of 370,000. Thousands of people from eastern Ukraine, where Russia has concentrated its offensive, have fled there since Russia invaded Ukraine on Feb. 24.

Kateryna Popova said she saw many injured people lying on the street after the missiles struck. Popova had fled from Kharkiv in March in search of safety in “quiet” Vinnytsia. But the missile attack has changed all that.

“We did not expect this. Now we feel like we don’t have a home again,” she said.

Borzov said 36 houses were damaged and residents have been evacuated while a 24-hour hotline has been set up for information on those injured or missing. July 14 will be declared as a day of mourning for the region, he said.

Ukrainian military analyst Oleh Zhdanov said he thinks the attack mirrors previous ones on residential areas that Moscow launched “to try to pressure Kyiv to make some concessions.”

“Russia has used the same tactics when it hit the Odesa region, Kremenchuk, Chasiv Yar and other areas,” Zhdanov said. “The Kremlin wants to show that it will keep using unconventional methods of war and kill civilians in defiance to Kyiv and the entire international community.”

Before the missiles hit Vinnytsia, the president’s office reported the deaths of five civilians and the wounding of another eight in Russian attacks over the past day. One person was wounded when a missile damaged several buildings in the southern city of Mykolaiv early Thursday. A missile attack on Wednesday killed at least five people in the city.

Luhansk and Donetsk together make up the Donbas, a mostly Russian-speaking region of steel factories, mines and other industries that powered Ukraine’s economy.

“We are urging civilians to leave the region, where electricity, water and gas are in short supply after the Russian shelling,” Kyrylenko said in televised remarks. “The fighting is intensifying, and people should stop risking their lives and leave the region.”

“The aging vehicles, weapons and Soviet-era tactics used by Russian forces do not lend themselves to quickly regaining or building momentum unless used in overwhelming mass — which Russia is currently unable to bring to bear,” the British ministry said.

Both the Russian forces and Ukrainian militaries are seeking to replenish their depleted stocks of unmanned aerial vehicles to pinpoint enemy positions and guide artillery strikes.

Both sides are looking to procure jamming-resistant, advanced drones that could offer a decisive edge in battle. Ukrainian officials say the demand for such technology is “immense” with crowdfunding efforts underway to raise the necessary cash.

— Russian-installed officials in southeastern Ukraine’s Zaporizhzhia region announced that they planned to hold an early September referendum on incorporating the region into Russia. Large parts of Zaporizhzhia are under Russian control now, as is most of neighboring Kherson. Kremlin-backed administrations in both areas have declared their intentions to become part of Russia. Separatist leaders in the self-proclaimed Donetsk and Luhansk “republics” have also announced similar plans.

— Russia’s parliamentary speaker visited separatist-held areas in eastern Ukraine on Thursday, hours after Kremlin-installed officials in the country’s south announced they would hold a referendum on joining Russia. According to Russian news agencies, Vyacheslav Volodin spoke of the need to harmonize legislation between Russia and the self-proclaimed “Luhansk People’s Republic” in his address to the territory’s self-proclaimed legislative assembly. He said Moscow and the separatists need to “create a single legal field” in the areas of health care, education, public utilities and social protections.

— Russian President Vladimir Putin on Thursday signed into law a bill banning the dissemination of information on Russian companies and individuals who could face international sanctions. The law explicitly bans from internet or media publication — without written permission — any information about transactions made or planned by Russian individuals or legal entities participating in foreign economic activity. It also suspends for three years the obligatory publication of key financial and governance information by major Russian state corporations.