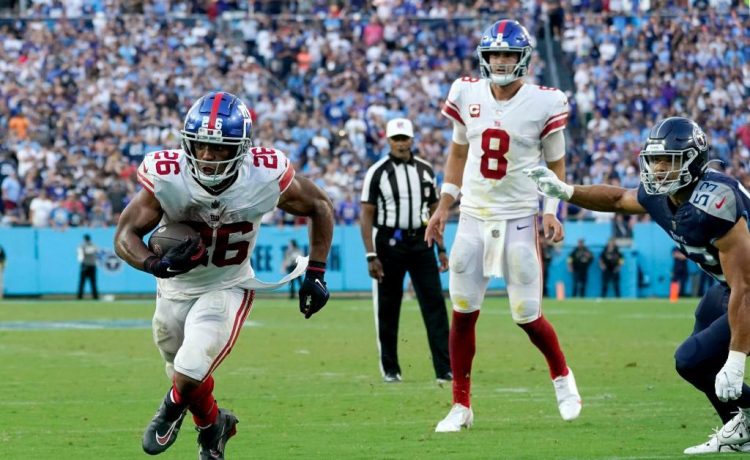 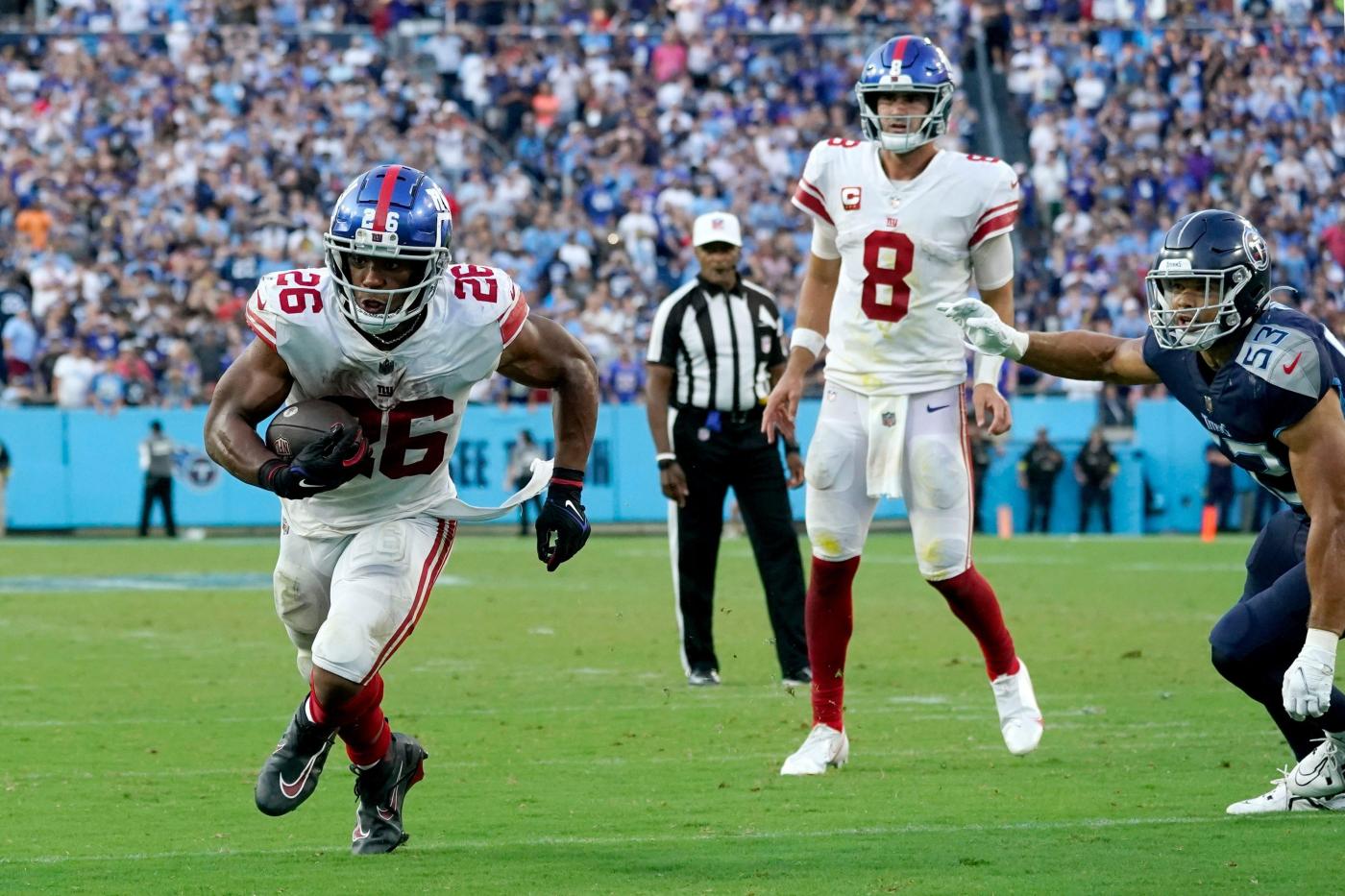 The Giants started their season with a win on the road against a Titans team that thought it was on its way to the AFC Championship game last season until Ryan Tannehill, well, turned into the guy the Giants beat in Nashville last Sunday.

So Daniel Jones didn’t lose the game, at least partially because Brian Daboll didn’t give him a chance at the end, letting Jones throw just three passes on the game-winning drive, the longest for seven yards. Saquon Barkley won the game by running for 164 yards, and so did Daboll, by going for the win when it was 20-19, and putting the ball in Barkley’s hands one last time on a two-point conversion. So Barkley had gone into Nashville and played the way Derrick Henry has played for the Titans for years, winning that kind of game for the Giants.

It was the best Sunday the Giants have had in a long time. And was just one Sunday, of course. But what if the Giants can have another one, at home this time, against the Panthers?

What if the Giants, who haven’t gotten off to a good start in years, get to 2-0 against Baker Mayfield, as they’re favored to do? If they do, and it’s hardly crazy to think they can, what is to stop them from getting to 3-0 at home against the Cowboys without Dak Prescott?

And if they do that, their next game is also at home against the Bears, on the first Sunday of October.

Did I think the Giants were going to do much or be much this season? I did not. Nor did some of the best Giants fans I know, including ones in my own family. Every Giants fan I know still has a right to wonder if Jones is still going to be the quarterback next season, after he plays for his job, and his Giants career, this season. He managed the game against the Titans, he threw that one big ball to Sterling Shepard, then on the drive that ended up winning the game he mostly let Barkley run when he wasn’t running himself. Teams are going to stack the line and make him throw the ball down the field, probably starting with the Panthers Sunday.

Again: We’re just talking about one upset win in September. It was still something to see. Barkley made some entrance into the season, and was the best back in the league on the opening Sunday. Daboll made just as much of an entrance, rolling the dice and rolling with Barkley the way he did on the conversion. The Giants usually lose openers. This time they did not. They came from behind in the second half, on the road, and won.

The Giants got to 1-0. They won on a day when the Eagles won and the Commanders did the same and the only team in the NFC East that lost was the Cowboys. Who also lost their quarterback for a couple of months.

Does that mean they win three home games in a row to get to 4-0, which would have been a bananas idea going into the Titans game? It does not. But the Panthers, even with the comeback they made in their opener at home against Jacoby Brissett and the Browns, lost on a 58-yard field goal by a kid named Cade York. The Cowboys did nothing against the Bucs even before Prescott got hurt. The Bears beat the 49ers in the rain, 19-10, but did this on a day when they got 121 passing yards from Justin Fields and their three top rushers gained 65 fewer yards than Barkley did.

The game for the Giants to get is the one on Sunday against Carolina, one that would show their fans, the ones looking for anything to give them hope that this might at least be an October that matters, that the upset of the Titans wasn’t a fluke. If the Giants can get another professional effort this week from Jones and Barkley and Wink Martindale’s defense, they can provide some real hope for the first time in years, no matter how low we set the bar for them coming into the season.

Or they lose the home opener. And because Giants fans have really been conditioned to expect the worst over the decade since their last Super Bowl, they will immediately start to worry about how quickly this year could turn into last year.

They know how it has gone. They know about Dave Gettleman and Pat Shurmur and Joe Judge, the coach that Giants fans thought of as the wrong Judge around here. They have watched the Giants turn into the Knicks or, worse, the Jets. It wasn’t ever supposed to be that way after the second Super Bowl over the Patriots. But that is the way it has been.

But then they made a little noise against the Tennessee Titans. Barkley ran all over the place and the coach made as big an entrance as any new Giants coach has ever made, and just like that there was a little light to go with the noise.

Here is how Barkley described the moments before the Giants went for two:

“He gave me that look, and I knew what the play was going to be. He gave me that look and I kind of looked back at him and said, ‘F—k yeah.’ We called it up and we were able to execute the play and get in. He’s a man of his word. He told us he’s going to be aggressive. He told us he’s going to lean on the players to make plays. In that situation, he did exactly that. When you have a coach like that, it’s definitely going to make you go out there and fight for him and execute in those situations.”

In that moment, game on the line, Daboll became every bit as much of a star of that game as Barkley had been. Here is what the coach said about his decision:

“We’re going to be aggressive. That’s what we want to do. That’s the mindset I want the players to have. If it didn’t work, I could [live] with it. I thought that was the right decision…I trusted Saquon Barkley.”

He did. More importantly, Barkley and everybody else on Daboll’s team trusted their coach. Of course everything is different, starting with the conversation about the Giants, if Barkley had gotten stuffed. But he didn’t. The Giants put themselves in position to get a game like this on the road and they didn’t settle for overtime on this day. Seized it instead. Ask any Giants fan you know when the last time was they came away from any regular-season game feeling like this.

Now we see and they all see if they can do it again this week. The old basketball coach John Wooden once said, “Anybody can win one in a row.” But wouldn’t two be something for the ‘22 Giants? You know what it’s been like. What other way is there to root?

ROGER DELIVERS A PERFECT GOODBYE, FACTS AREN’T ON SALEH’S SIDE & PRIME TIME FOR AL AND KIRK …

The sport of tennis, the world of sports, says goodbye to the great Roger Federer after next weekend’s Laver Cup matches in London.

He was not simply the most elegant player in the history of men’s tennis.

He is as popular a player as men’s or women’s tennis has ever produced, a champion whose career was defined not just by his 20 majors and not just by his rivalries with Rafa Nadal and Novak Djokovic, but by what Pete Hamill once described as an old-fashioned thing called grace.

And try telling the millions of Federer fans around the world that anybody else was the best men’s player of them all, even if Nadal and Djokovic have won more majors than he did.

If you haven’t yet seen the statement he made on Instagram announcing his retirement, go find it and watch it.

It was merely perfect, the way his tennis so often was.

Francisco Lindor is not just the best shortstop the Mets have ever had, he is the one who is going to end up knocking in 100 runs this season.

What took Gleyber Torres so long to go the other way?

I appreciate Robert Saleh’s belief in himself, I do, and Saleh seems like a really good guy.

But facts are stubborn things, and the facts on Saleh is that he has won four out of his first 18 games coaching the NYJ.

That fixing of the offensive line thing that general manager Joe Douglas has been promising for three years — how we lookin’ on that?

It’s about what could happen to the country if the greatest threat to it becomes a president who’s had, shall we say, a break with reality.

Where or where does Patterson get ideas like that?

My friend Barry Stanton says that it sure is lucky for Daniel Snyder that Adam Silver isn’t commissioner of the NFL.

Al Michaels and Kirk Herbstreit sounded like they’d been working together for years during their first game on Amazon Prime Thursday night.

Happy birthday to our oldest, Christopher.

In addition to all the joy he’s brought to us since he was the first child of our four, his life only get better in a few months, when he and his wife will welcome their own first child into the world.

It seems like about twenty minutes ago that he was making 3-pointers in high school basketball.

Now he’s going to be a dad.

Life comes at you fast.

But, man, has it been worth it with our oldest.

Mike Lupica’s new Jesse Stone novel made its debut this week at No. 38 on the USA Today Best Seller list, which includes fiction, non-fiction, and children’s books.