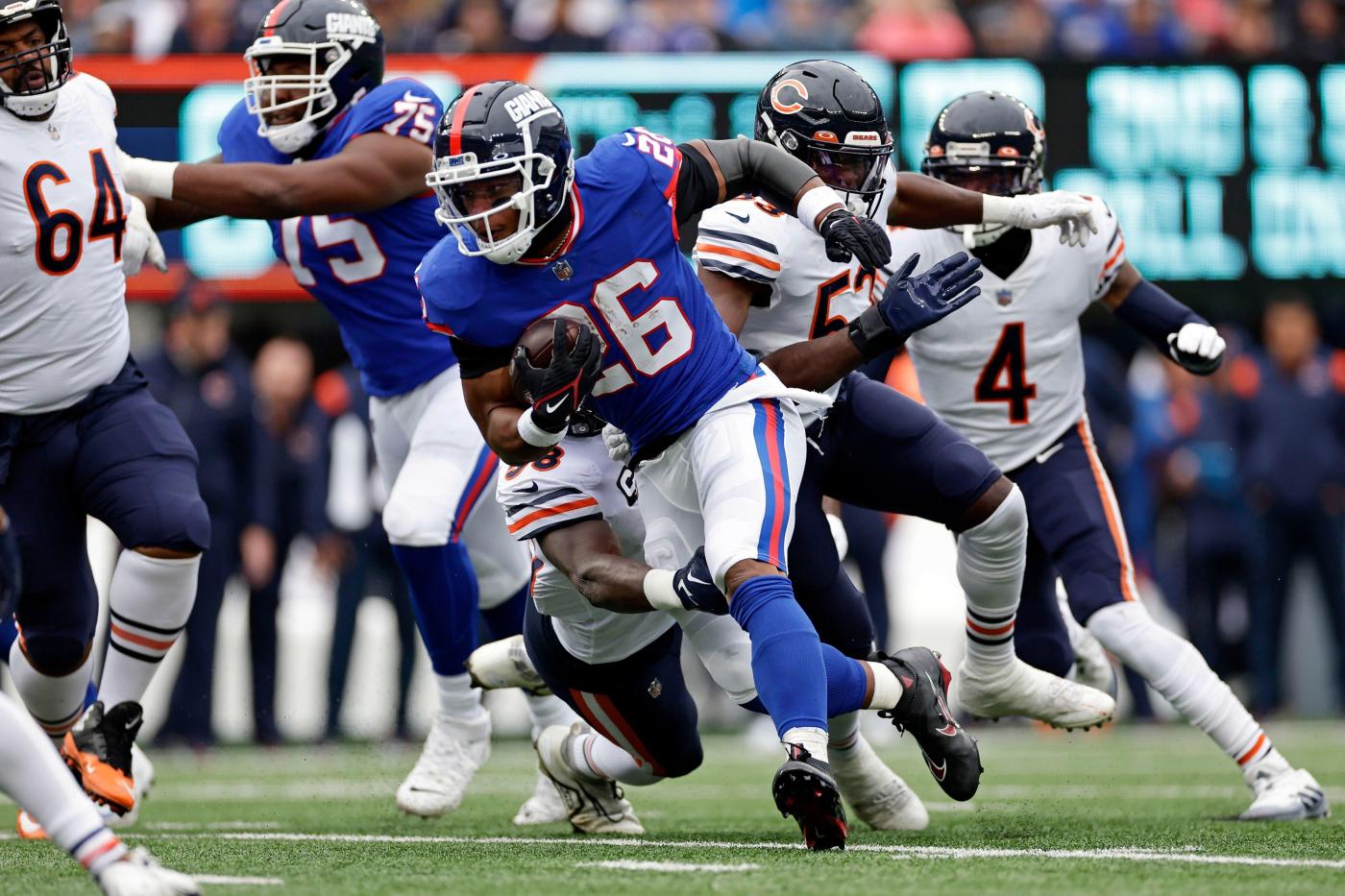 HANK’S HONEYS: The line is pretty much an insult to Brian Daboll’s surprise team. The Ravens should be favored and they should win the game. But the Giants have all the elements to keep this close. Wink Martindale, who has been as good a coordinator as Daboll has been a head coach, knows enough as a former Ravens assistant not to throw all-out blitzes at Lamar Jackson and he’s going to construct a defense that can contain him as a runner. Meanwhile, we have a really good Giants running game going against a decent but not-great Ravens D that ranks 28th in total yards allowed. That running game has helped Daniel Jones. Baltimore is tied for the league lead in takeaways with 11 but by taking fewer chances, Jones has been limiting his mistakes. This could be a letdown for Baltimore after two intense games against the Bills and Bengals.

IF I WERE A BETTING MAN: Giants and the over.

HANK’S HONEYS: Not to overreact to last week’s shocker in London but as the Giants showed last week, something is not right with the Packers. Aaron Rodgers still isn’t in synch with all his receivers and his ability to attack downfield isn’t the same. Green Bay’s only big win came against the Bears, Rodgers’ personal property, and otherwise, it’s been a bit of a slog. There is no doubt the Jets are up and coming with some bright young stars on offense against a Packer defense that’s been unexciting. While there is a chance the Jetsies will be feeling too good about themselves after routing the QB-less Dolphins, we don’t think Lambeau Field is going to be too big for them. They may not win but they can certainly hang in there with a far-less explosive Green Bay team.

IF I WERE A BETTING MAN: Jets and the over.

HANK’S HONEYS: As much as we dislike the idea of taking the Vikings as a road favorite in the heat and humidity of Miami, we can’t back a team that has a rookie QB (Skylar Thompson) making his first start. That’s got to impact the effectiveness of a downfield passing game built on speed but now looking to put the QB in more comfortable situations. The Miami defense has been exposed with the injuries at QB. The Jets ran over them last week and Dalvin Cook is starting to heat up. If that happens, Kirk Cousins will use play action to find Justin Jefferson and Adam Thielen.

HANK’S HONEYS: Bill Belichick always tries to limit what the opponent does best and in this case, limiting the Browns’ relentless running game means taking ex-Pat Jacoby Brissett out of his game-manager mode. The New England defense has been forcing turnovers and scoring points and could coax one or two INTs out of Brissett if he’s often in third and long. Mac Jones could be back but even if it’s Bailey Zappe again, the Pats can move it on the ground against a terrible Cleveland run defense that couldn’t stop Austin Ekeler. The Browns had excellent chances to win all three games they lost. But then again, they are the Browns and the Patriots are the Patriots and you can’t fool Mother Nature.

IF I WERE A BETTING MAN: Patriots and the over.

HANK’S HONEYS: Tom Brady has won 12 straight games SU against rookie QBs. Kenny Pickett is making his home debut as a starter against one of the best defenses in football and behind one of the worst-performing offensive lines in the NFL. He is going to see blitzes and coverage schemes that he can’t even imagine. Eight Steelers sat out practice Wednesday and CB Josh Jackson, who came up from the practice squad, could be thrown into action again — and Brady loves picking on your weakest link. Don’t expect the Bucs to take their foot off the gas again. It almost cost them against the Falcons last week. Besides, the Steelers, unlike the Falcons, are a mess.

HANK’S HONEYS: Joe Burrow is in a must-win spot back in the state where he led LSU to a national championship and with the line so low, we like his chances. If Geno Smith can tear up the Saints’ pass defense, Burrow and former Bayou Bengal Ja’Marr Chase should thrive behind the improved protection Burrow has been getting. Andy Dalton is 2-0 against his former team but this Cincy defense is far better, allowing just 17.8 ppg. All three of the Bengals’ losses have been by three points or fewer and with an 11-2 ATS mark in their last 13 games, there is ample reason to pick the Bengals.

HANK’S HONEYS: Maybe it’s the best thing for the Panthers to get out of town, leaving a mess behind with the well-earned firing of Matt Rhule. And maybe it’s best that the more mobile P.J. Walker is starting this one in place of the injured Baker Mayfield. We’re not making the case for them being any good. But often times, teams play better the first week under a new coach and do the Rams have any business giving this many points the way their offense has been playing? Matthew Stafford’s protection is threadbare and one thing the Panthers can do well is rush the passer, especially game-wrecker Brian Burns.

HANK’S HONEYS: We’re looking for Kyler Murray to outscore Geno Smith and we’ll take the over while we’re at it. The Cardinals simply have the better defense. They held the explosive Eagles relatively in check in the second half. The Seahawks’ defense is a sieve and after being plagued by slow starts, the Cardinals should be able to go right after Seattle’s porous secondary with Murray having all day to throw … or run, or do whatever he chooses to do. The Cards are 10-2 ATS on the road since the start of the 2021 season while Seattle, which once dominant at home, is just 5-5 over that same span.

HANK’S HONEYS: This Cowboys defense is superb and after facing a string of so-so and worse stop units (Lions, Vikings, Commanders, Jaguars and Cardinals) the Eagles and their banged-up O-line are going to be in a lot of uncomfortable situations. Jalen Hurts can scramble but his numbers against pressure — 42% completions, 5.3 yards per attempt) are poor. It looks like Cooper Rush will start again and that’s not a bad thing because the Cowboys will be forced to go to a conservative — and winning — game plan. This way, they can shorten the game by going to the run and allowing Rush to continue to play mistake-free football.

HANK’S HONEYS: We’re done waiting for Russell Wilson to get things right with his new team. He’s missing throws and he’s not making plays on the run. Whether it has to do with his injured shoulder, it’s obvious he’s not the same QB he was in Seattle. Justin Herbert, however, is going to force him to be that quarterback and if the Chargers get a lead, there is no way the Broncos can come back with their sputtering offense. The Chargers’ run defense is a concern but with Javonte Williams out for the season, the Broncos are searching for answers there, as well. To some this seems like a sucker bet but with the Bolts (4-1 ATS by the way) coming home after two straight victories on the road, they should coast.

IF I WERE A BETTING MAN: Chargers and the under.

HANK’S HONEYS: The Bills have 60 minutes to avenge 13 seconds and a coin flip. They’re supposed to be the best team in football and with Josh Allen at quarterback, they can certainly win this game. But we also have to ask how a team as talented as the Chiefs can be a home underdog? The Chiefs might be sick of hearing how the wrong team was playing in the AFC Championship Game and that close call against the Raiders may have had something to do with looking ahead. The Bills are still thin in the secondary. Tre’Davious White is sitting out another game and Patrick Mahomes will likely target rookie Kaiir Elam. All that said, if we were going to bet this game, it would be on the over. The K.C. pick is strictly a lean.

CAN’T HELP YOURSELF? Chiefs and the over.

IF I WERE A BETTING MAN: Jaguars and the over.

IF I WERE A BETTING MAN: Niners and the over.