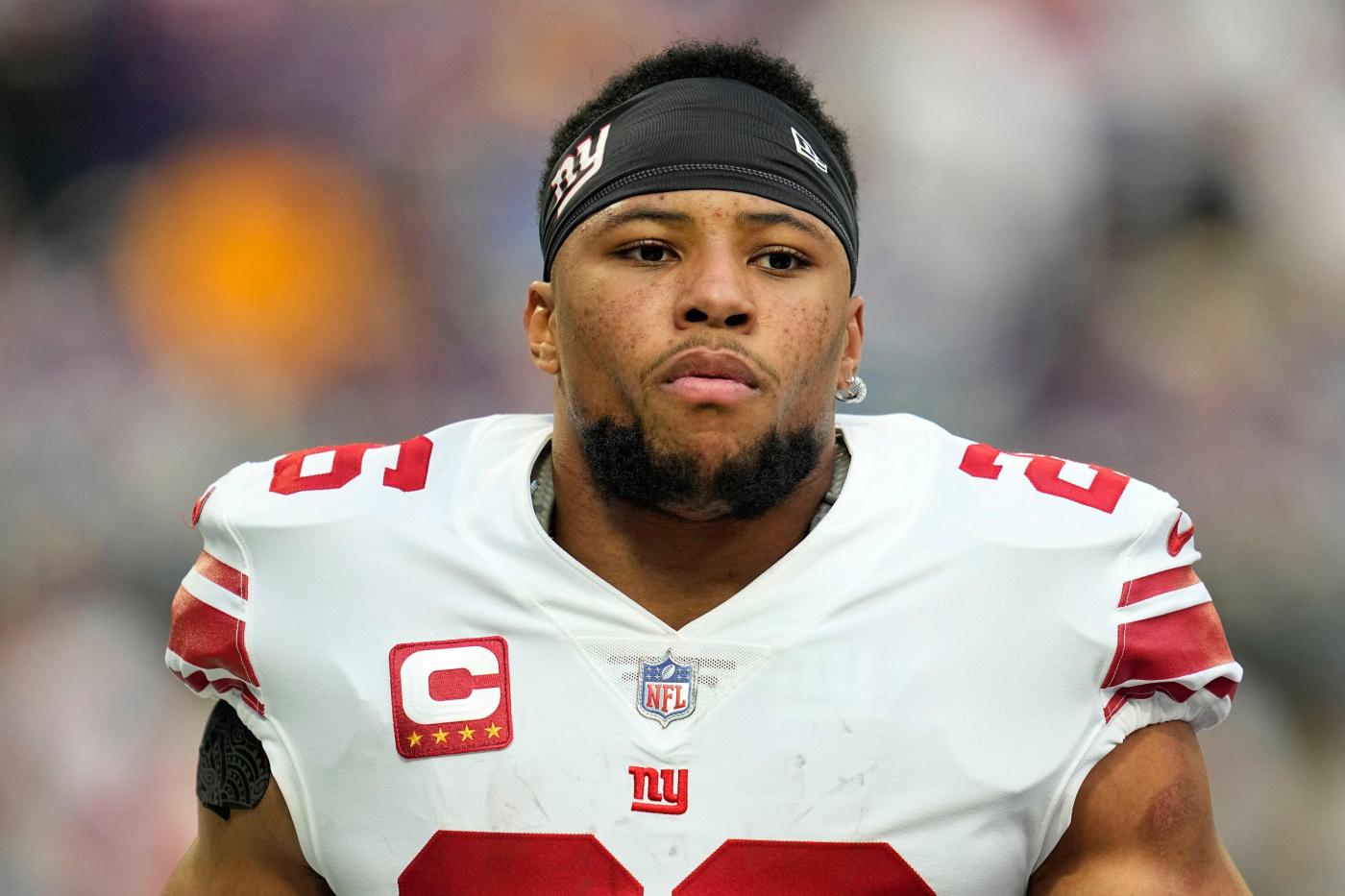 Saquon Barkley is coming off a tremendous game against the Vikings, where he recorded 109 all-purpose yards and five receptions in a 31-24 win.

Now he will try to do something he hasn’t done since his rookie year Saturday against the Eagles and that’s record a 100-yard rushing game.

“Ever since I’ve been in the league, my first year in the league was the year after they won the Super Bowl. They’ve been a really good team.”

In 2018, Barkley ran for 130 and 101 yards in his two meetings against the Eagles. He also had 16 catches for 140 yards and three total touchdowns against Philadelphia as a rookie.

That includes the nine carries for 28 yards Barkley finished with during the 48-22 loss to the Eagles on Dec. 11. Barkley did not play against the Eagles in Week 18 as the Giants rested a number of key starters because they clinched a playoff spot the week before against the Colts.

“You can learn from the good, the bad, the ugly,” Barkley said. “Obviously, the first game they got up right away. Offensively, I think we did some pretty good stuff, but we could be a little more consistent.

“At the end of the day, we know they’re a talented team. They have how many pro bowlers? How many all-pros?

“They’re the number one team in the NFC for a reason. It’s going to be a tough challenge, but you can definitely go back and look at film. Also, like I said, learn from the good, the bad and the ugly.”

Barkley is amidst a resurgent season for the G-men as he finished fourth in the NFL in rushing with 1,312 yards and 10 touchdowns. He also caught 57 catches for 338 yards.

Barkley took the NFL world by storm as a rookie, registering 2,028 all-purpose yards (1,307 rushing yards and 91 receptions for 721 yards) and 15 touchdowns. But he dealt with several injuries during the subsequent three years.

In 2019, a high ankle sprain kept him out three games, but he still finished with 1,003 yards and six touchdowns. But in 2020, Barkley missed all but two games after tearing his ACL as that ended his season. He returned in 2021 and played in 13 games, but Barkley couldn’t regain his old form as he ended the year with 593 rushing yards and two touchdowns.

Barkley said he believes his competitiveness drives his success.

Barkley has been the engine that’s driven the Giants offense this year while quarterback Daniel Jones was attempting to find his footing in a brand new offense under coach Brian Daboll and offensive coordinator Mike Kafka.

Barkley will face a stout Eagles defense that’s been a menace to opposing quarterbacks and running backs all season. Philadelphia ended the 2022 season second to the 49ers in total defense (301.5 yards allowed per game), eighth in points allowed (20.2) and first in team sacks (70).

“I never thought I had to do everything,” Barkley said. “I think it speaks to the coaching staff, to the players. Our identity changed throughout the season.

“You’ve got to give credit to the whole offensive coaching staff, the O-line, everyone. Not only myself, but you can see just how we evolve and adapt week by week and throughout the whole season.”

After being born in The Bronx, Barkley and his family moved to Bethlehem, Pennsylvania when he was four years old. He also attended high school at Whitehall and went to Penn State for college. So Barkley has been around Philadelphia fans his entire life, so he knows what to expect during Saturday’s hostile game at Lincoln Financial Field.

“My mom and dad are definitely going to show up to that game,” Barkley said. “Philly is Philly. Their fan base is crazy.

“It’s funny, when we were coming into the game last time, we were coming in and there was a little kid and his parent. I was just staring, and I was like, ‘I’m going to see if he’s going to flip us off.’ He didn’t, he just gave us a thumbs down and I was like, ‘Okay, we’re going in the right direction here.’ Playoffs is definitely — I expect it to be a hostile environment.”

On the list of Eagles players the Giants will need to be aware of Saturday, Boston Scott’s name might be outside the top five. However, he has made a living playing well against the Giants during his career.

Of his 18 career touchdowns, 10 have come against the Giants, which ties Derrick Henry for the most any player has scored against an opposing team since the 2019 season.

When asked about Scott and his performance against the Giants throughout the years, defensive coordinator Wink Martindale seemed to downplay it.

“I know, just cause he scored, I don’t think he’s a Giant killer,” Martindale said.

After having a limited designation on Tuesday, cornerback Adoree’ Jackson (back) was a full participant during Wednesday’s practice.

After missing seven weeks because of a sprained right knee, Jackson returned against the Vikings last week as he made seven tackles.

“Just thankful for the journey and the road to be able to come back and to play, and just be with the guys,” Jackson said. “I just think it was just that moment when you’re out on the field you cherish it, a lot of people say you don’t know when your last snap may be, I didn’t know that my last snap was going to be right before Thanksgiving.

“To go through that process and then to finally be out there with everybody being in an atmosphere with them, it’s different than just seeing it and watching them play. To be a collective as a team and be with your brothers, it’s just a special feeling.”