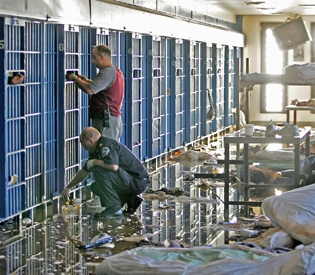 When it comes to better serving the mental health needs of correctional officers, the problem is not a financial one, according to the soon-to-be president of the Massachusetts Sheriffs Association.

A panel of Massachusetts sheriffs told lawmakers they continue to grapple with attrition and hiring slowdowns fueled in part by long hours and work conditions. The elected law enforcement officials contrasted the challenges they say correctional officers face with the total volume of inmates, which has dropped steadily for years and is now touted as the lowest incarceration rate in the country.

Hampden County Sheriff Nick Cocchi, who is the current vice president of the association and will soon take over as its president, said sheriffs are consulting with national advisors on strategies to make 2023 “the year of the correctional officer.”

“What can we do more on mental health and wellness for our correctional officers? The answer isn’t money, that I can tell you,” Cocchi told the Judiciary Committee, which invited sheriffs to Beacon Hill to testify about implementation of a 2018 criminal justice reform law and other ongoing challenges. “It’s not higher salary, [which is] what some of the unions will tell us. The unions aren’t getting it. The answer is quality-of-life issue improvements.”

Cocchi said that although Hampden County has cut the number of incarcerated people from 2,400 in 2007 to fewer than 1,000 now, it is “harder to manage the unit today” than it was 15 years ago.

“It’s very difficult to manage these men and women that are incarcerated today. It’s taking a lot of compassion, professionalism and it’s taking a lot of patience, and it’s the same thing over and over again,” he said. “So our staff are getting frustrated and they’re getting, quite frankly, the word is burnt out.”

Middlesex County Sheriff Peter Koutoujian agreed, saying he oversaw about 1,200 inmates when he started as sheriff a decade ago and now has about 800 under his watch.