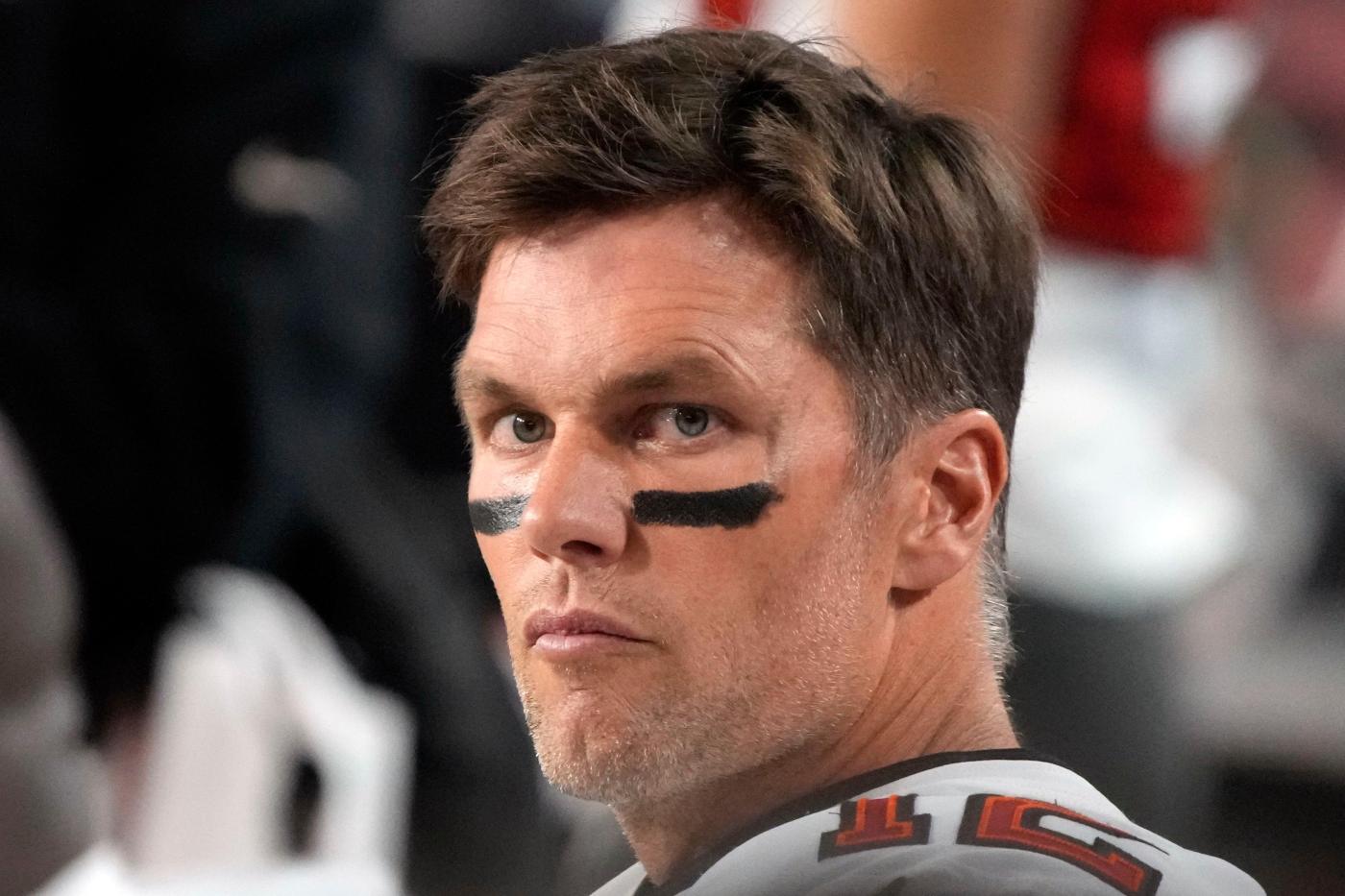 While he appears to be leaning towards coming back for the 2023 season (at least that’s what he indicated on his SXM “Let’s Go” show and what NBC’s Rodney Harrison said after a sit-down with the iconic Bucs quarterback) it has not stopped concerned citizens from speculating on his broadcasting future.

Brady, in case you forgot, has agreed to a 10-year, $375 million deal with Fox Sports to become its No. 1 game analyst. Greg Olsen currently keeps his seat warm working with play-by-play voice Kevin Burkhardt. Much of the chat is about how Brady will do in the booth whenever he does arrive.

If Tampa Bay doesn’t make it, could his debut be on the Foxies Feb. 12 Super Bowl LVII telecast? Apparently, Fox has nixed that possibility. Yet don’t discount an appearance by Brady during the multi-hour pregame show. A segment with Michael Strahan and Rob Gronkowski would be quirky.

And if he does retire after this season, or whenever he does decide to hit the road, expect Brady to move into Olsen’s chair in a two-man booth with Burkhardt. The notion about Olsen being part of a three-person configuration with Brady doesn’t make sense.

While he’s held his own, Olsen has not lit up the booth. And he doesn’t transcend the game. That’s exactly what Brady does. That’s what Fox is paying big moo-la-dee for. The totality of his persona attracts casual fans as well as the hardcore.

Having dueling analysts would only dilute Brady’s presence. Nonetheless, without seeing Brady work a single game, the TV cognoscenti is already predicting he will be bland as a bowl of mush. Much of this opinion is based on his often-guarded interviews. The critique neglects to incorporate the Brady edge into the mix.

Watching his sideline outbursts provides ample evidence of his ability to be emotional and cutting. And in other venues, like his radio show, Brady has been critical, not shy about responding to naysayers.

Brady countered Collinsworth’s analysis, saying: “I’m gonna get a chance to cover some games here shortly, at some point. So maybe I get a chance to fire back at everyone else.”

Brady’s statement should give those predicting his quick booth demise reason for pause. The reality is he’s not the football au-Tom-aton as often portrayed. His words should also be music to the Foxies’ ears. It shows Brady’s willingness to mix it up in the booth.

When he finally arrives there.

Yet it’s not a reach to find hypocrisy in the ruling. Through its partnerships with legal gambling outlets, the NFL has helped create and support an environment where betting on all sports is encouraged.

The marketing of the product is in high gear 24/7. The advertising is non-stop, including during games.

So, while consumers are encouraged to gamble on games an NFL coach gets busted by the league for apparently falling head over heels for the sales pitch.

GIVE US A WARNING

When it comes to selling, those Gasbags on NFL pregame shows are very skilled.

For example, Phil Simms and Norman Julius Esiason on CBS who give their sponsored football picks shortly before kickoff. Yet these guys, and their colleagues on “The NFL Today,” tried hard, leading up to Broncos-Rams last Sunday, to convince viewers the game, with the prime storyline being the demise of Russell Wilson, would be worth watching.

They weren’t convincing. They would have better served the community by attaching a verbal warning label to the product we were deciding whether to watch.

The Valley of the Stupid is filled with voices playing the same tune about the future of the quarterback they can’t stand, Zach Wilson.

Somehow, they link his poor play to Wilson, who they don’t know, being a bad person. Would they have a problem with his perceived “personality” if he was lighting things up on the field?

ESPN’s Steve Young, is a Wilson confidant, who has consistently been in the Jets QB’s corner, saying he would snap out of his on-field funk. Nonetheless, he waved a warning flag on “Monday Countdown.” Young did not sound confident about Wilson being able to rise up and survive on the field.

On “Countdown,” Young has been a Wilson barometer. When he is critical of Wilson it’s time for legitimate concern.

Filling in on WFAN’s mid-day shift last week, Joe Benigno put his time to good use.

Of course, he talked Jets. Joe B even got specific, saying he’s paid attention to Jets postgame shows, including the one on ESPN-98.7.

Benigno did not opine on host Dan Graca. He saved his vitriol for former Jet, and longtime radio pre and postgame voice, Greg Buttle. Benigno claimed Buttle has gone negative on Jets fans, especially the ones who booed Zach Wilson.

“He [Buttle] would never come on [the radio] with me,” Benigno crooned on the air Monday. “He’s such a shill for the organization.”

Doubt Buttle would back down from going mouth-to-mouth with Benigno. In fact, a Jets debate between the two yakkers would be compelling radio.

All the hype about the NFL crushing the NBA on Christmas did not exactly come to fruition. At least if you wanted to see hoops hold its own. NBA viewership was up from Xmas Day 2021 even though it was going head-to-head with the NFL this year. … Those ESPN shots of Minnesota and Syracuse players slipping and sliding on the chewed up Yankee Stadium turf during Thursday’s Pinstripe Bowl were disturbing. Were the players put at risk because of the shoddy sod, something ESPN voices did not ignore? Seems like the buttoned-up Yankees organization didn’t even have a handle on the Stadium’s field conditions. … Christopher (Mad Dog) Russo said his Tuesday (Dec. 20) interview with Franco Harris was the “most significant” one-on-one he’s done during his SXM tenure. “Based on all the circumstances it was the most important,” he said. Harris died, suddenly, the following day. … Without Stephen A. Smith and Molly Qerim, Russo was like a lost Dog on Wednesday’s edition of “First Take.” Damon Amendolara brought a different sound to FAN’s afternoon drive, filling in for Craig Carton and Evan Roberts. The same entertaining style Amendolara brings to his CBS Sports Radio morning show. … Can James (Guitar Jimmy) Dolan please use his Facial Recognition System to find Leon Rose?

DUDE OF THE WEEK: ANTHONY LEAL

For his generosity. The Indiana hoops star put his NIL revenue to great use. For Christmas, Leal paid off his older sister Lauren’s student loan debt. When Lauren said she didn’t know how much the debt was, Leal said: “I do. It’s zero now.”

A new GM in 2022. A new head coach in 2022. Still, it’s the same old bumbling and stumbling thru the season. They even made quarterback Derek Carr the scapegoat. Happy New Year!

What Geno Smith said: “I can’t even tell you what the (Jets) narrative was.”

What Geno Smith meant to say: “Who could’ve predicted I would get my jaw broken by a teammate’s punch?”