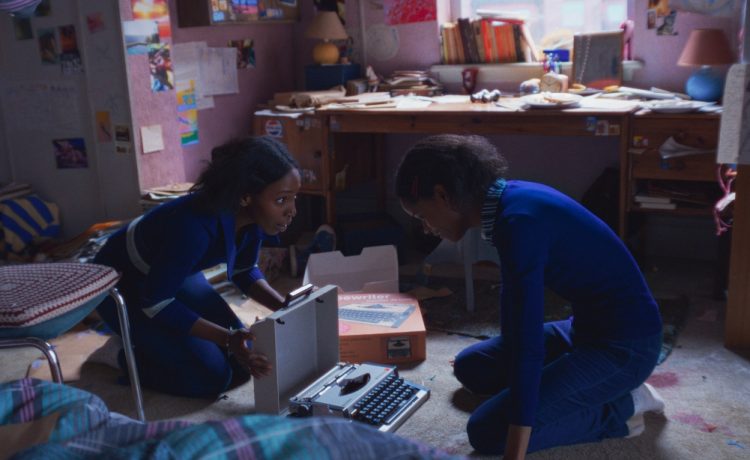 Based on a bizarre true story, the admittedly uneven “The Silent Twins” is a fictionalized account of the real-life Barbados-born twins June Gibbons (Letitia Wright) and Jennifer Gibbons (Tamara Lawrance, “Kindred”), whose family moved to England and then to Wales and who decide as children never to speak except to each other and in private. Outside of their room, which is their haven and the place where they tell each other stories and eventually learn to type them, June and Jennifer do not speak.

This will not be entirely clear to viewers in opening 1970s-set scenes featuring stop-motion animation, the voices of the sisters and the first of several invocations of the music of English rock band T. Rex. In fact, not much is entirely clear in this wonderfully strange effort directed by Polish filmmaker Agnieszka Smoczynska (TV’s “Warrior Nun”) and adapted by American screenwriter Andrea Seigel (“Laggies”) from the book by the noteworthy Sunday Times journalist Marjorie Wallace (Jodhi May).

“The Silent Twins” is the story of outsider artists. The Gibbons sisters might have been conjured up by the imaginations of Jane Austen or Charlotte Bronte. Bullied at school, where they are the only Black students, June and Jennifer take refuge in their room together, where they create various make-believe scenarios and eventually become struggling writers and poets. Occasionally, “The Silent Twins” will break out its stop-motion story-telling usually involving the sisters’ toys, such as a pair of blue papier mache parrots. The girls are transferred to special education, where they meet sympathetic teacher Tim Thomas (Michael Smiley), who tries to get through to the young women using tape recorded questions and answers.

The adolescent girls become enamored of an American boy named Wayne (Jack Bandeira, “The Duke”), who introduces them to huffing and becomes their lover, as flowers bloom erotically on screen, causing a rift between the sisters. The girls break into Wayne’s parents’ home, steal some inconsequential items and start a fire. Eventually, to the dismay of Tim and Marjorie, the Gibbons sisters are sentenced to an indefinite stay at the notorious psychiatric hospital Broadmoor, where among other things we see some imaginary synchronized swimming in the hospital’s pool.

Always at the center of this story is the remarkable relationship between June and Jennifer, who are played as children by Leah Mondesir-Simmonds and Eva-Arianna Baxter, respectively. Their uncanny connection is more important to them than anything outside of them. They never tire of each other’s company. They are complete. But do they also cause each other to be incomplete? Will one of them have to be sacrificed for the other to survive? A fascinating examination of the nature of identity and creativity, “The Silent Twins” is a tour de force for Wright and Lawrance, who form a bond that is the unique heart and soul of this beautifully Gothic story. Also casting an intoxicating spell is the score by Marcin Macuk and Zuzanna Wronska.