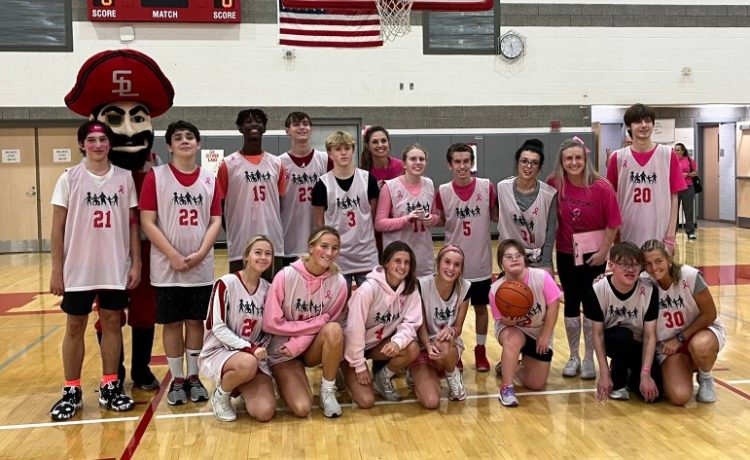 Any sport can be challenging but bringing a team of strangers together is what proves to be the true test on and off the court.

The Silver Lake Unified Sports Club has tackled that endeavor head on.

Unified Sports and Unified Champion Schools are backed by Special Olympics and were founded in 2008. Unified Sports exists from Pre-K all the way through to universities throughout the nation. Unified Sports allows players with and without intellectual disabilities to play and to interact as one unit.

The Silver Lake Unified Sports program just started in the spring of 2022 with track and field as the Lakers’ first sport. However, Bubba Ashby and Alexandra Frazier started the application process with the Special Olympics of Massachusetts in the fall of 2019, hoping to start in the spring of 2020. Like many other things, the COVID-19 pandemic threw a wrench into those plans.

This season, Frazier was excited to start a fall sport and now has a basketball chapter. Frazier is trying to expand the reach of the program throughout the school and in the minds of parents with her passion for inclusion.

Frazier is a special education teacher at Silver Lake and knows all too well about the benefits of student engagement and hopes the concept is a huge hit with Lakers Nation.

“I have said to people before, it takes a village to start a Unified Sports Program at your school. You must have the support of the administration and athletics director, as well as volunteers who want to put in the time with the students, as coaches or by providing general support at practices and or meets and games,” said Frazier. “I knew it was something I needed to start here at Silver Lake (because) there was a piece of the school community that my students have not been able to access easily and that was athletics.”

Haley had a whirlwind week as he led his team to their first-ever win in a six-point victory over Middleboro in the road season opener. Then, in the first-ever home game on Friday, the Lakers (1-0-1 ) tied Hingham 41-41 in a thrilling, overtime nailbiter as Haley was the star with a game-high 20 points and 11 rebounds.

With the score tied 38-38, Brennan Barrett scored a rainbow three-pointer with just under a minute to play to put the Harbormen out front. But unsung hero Matthew McDaid (17 points; four rebounds) returned the favor on the other end for Silver Lake with 48 seconds left to knot everything at 41.

With the packed Silver Lake house chanting ‘Over-Time’ – the two teams agreed to a two-minute extra stanza. The extra time resulted in some feverish back-and-forth but did not produce another bucket as everyone left happy, even Haley.

“The fans brought energy to the team, a lot of them have a lot of motivation for the team and that makes this perfect,” said Haley. “The program means a lot because its for kids that have certain disabilities that are not able to play (traditional team) sports.”

Everything was not always perfect for Haley at Silver Lake.

Haley has gone from a quiet, reclusive 14-year-old in his first year at Silver Lake to a hallway rockstar as fellow teammate and partner athlete Ben Bonner nicknamed the 6’1’’ senior ‘Buckets’ and it has the entire student body joining in on making Luke a major part of the Unified Lake community.

“Alex (Frazier) is something I can not put into words. She is everything and has changed everything for my kid,” said Haley’s mother, Julie. “Luke came into this school and was lost and didn’t have a ton of friends. She builds his confidence to walk the halls with his head held high and he is now in more classes with peers than he is with her students.”

Julie Haley went on to continue to mention the ‘high school experience’. Every athlete that plays any sport enjoys the adventure of playing in front of the home crowd. With Frazier leading the way, Luke Haley, and his mother cheering every second, can now say he has had that special moment along with the dozen or so other partner-athletes and teammates.

“I think this is true for lots of students, not just those with varied abilities. Once students are in high school, athletics become increasingly competitive and intense,” said Frazier. “However, as a special education teacher for students with developmental disabilities, and as the aunt of a young man with Autism, I wanted to see my students have access to all of the offerings in their school community and for them to be included in a way that they can compete and participate in sports at their level while belonging to a team of peers.”

Frazier ended with saying her dream is to have Unified Sports as a fabric in the Silver Lake and Kingston communities and become an intramural-style league for students who may not enjoy the hard knocks of varsity sports at the high school level. Frazier sees the program lifting up the spirit in her students, the Silver Lake administration, and the surrounding community. Again, bringing everyone together for a cause.

“Whether it is the benefits of being physically fit, the companionship of friendship, the reduction of stress through activity, the ability to work alongside team members for a common goal or simply watching your family cheer you on; it is all good,” added Frazier. “I would also love to see us add a winter sport, as well. I might already be plotting and planning that!”