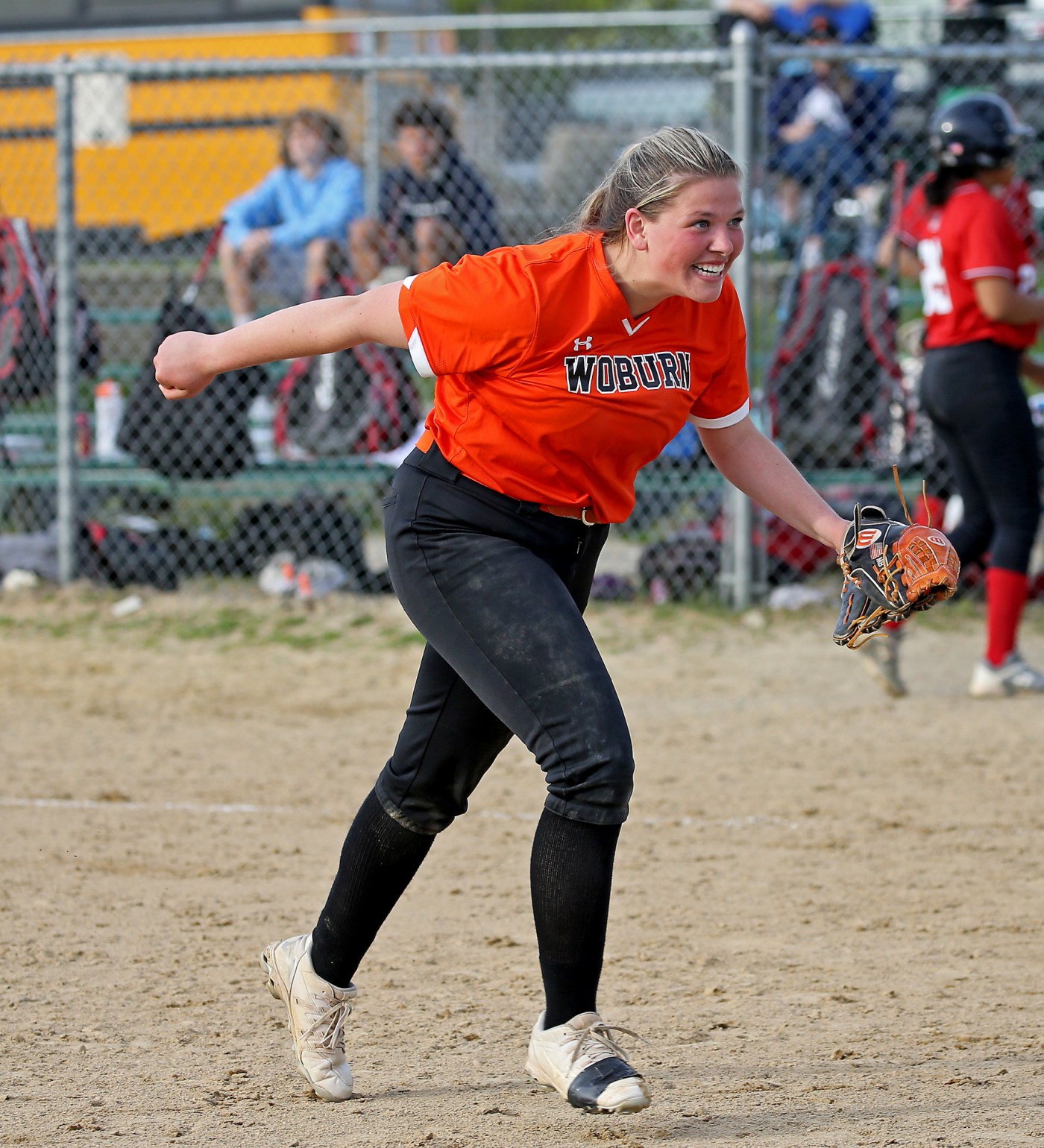 The junior batted .567 with 41 RBI and six home runs while on the mound compiling 162 strikeouts. Her efforts earned her Middlesex League All-Star. Barmash plays for the Concord Raiders in the summer.

Bettencourt had a standout sophomore season as she finished with a 1.21 ERA to go with 173 strikeouts in 126.1 innings. She also hit .580 with 32 RBI. The two-time Northeastern Conference player of the year, Bettencourt now has 232 strikeouts with still two years remaining. The honor roll student is also a member of the varsity basketball and volleyball team.

The junior hit .439 with 23 RBI and 21 runs scored. Inside the circle the right-hander struck out 118 batters while firing a pair of no-hitters. Boldebuck was an MVC All-Conference first team selection for her performance. She is a high honor roll student and a captain of the varsity volleyball team.

The Warriors centerfield hit .639 with four doubles, three triples, and 10 home runs to go with 39 RBIs. Butland was a Middlesex League All-Conference selection in 2022. The junior is also a member of Wakefield’s varsity gymnastics and volleyball team.

A two-way standout, Colleran batted .536 with seven home runs and 35 RBIs while also finishing with a 15-5 record and a 1.00 ERA. Colleran struck out an astounding 261 hitters in 126 innings. Only a junior, Colleran has already given a verbal commitment to continue her playing career at Boston University.

Coupal had a senior year to remember hitting at a .567 clip with 11 doubles, 37 RBIs, and 37 runs scored. She started at shortstop in each of her four years. Also a member of National Honor Society, Coupal will continue her playing career at the University of Connecticut.

The co-Most Valuable Player in the Cape Ann League, the senior standout batted a robust .508. DeLisle was also effective on the mound, striking out 88 batters while posting an impressive .063 ERA. An honor roll student, DeLisle will play softball and study nursing at the University of Southern Maine.

A two-time Boston Herald All-Scholastic, the senior first baseman/pitcher batted .429 with seven home runs and 39 RBI in leading her team to the Div. 4 state title. The Cape Ann League Player of the Year, DeLong ended her career with 108 hits. A member of the National Honor Society, DeLong will play college softball at Boston University.

Demoura was one of the premier catchers around. The junior battled .511 with nine doubles, five triples, eight home runs, and 35 RBis to help lead Taunton to a Div. 1 state title. The Tigers captain was a Hockomock League All-Star. DeMoura is a member of the National Honor Society and also plays field hockey. She is verbally committed to Southern New Hampshire.

The senior infielder finished with a .542 average with 13 RBI out of the leadoff spot. A two-time Hockomock League All-Star, Feldman combined to bat .561 over the previous two seasons. Also a member of the swimming team, Feldman is set to attend Southern New Hampshire University to continue her playing career.

Fernald saved her best for last as the senior hit .649 with 12 doubles, two triples, 10 home runs, and 46 RBI. Fernald earned co-MVP of the Dual County League. She finished with a .625 career average. A two-time Boston Herald All-Scholastic, Fernald is set to major in aerospace engineering at the United States Naval Academy.

Grady was 17-3 with a 0.981 ERA and 188 strikeouts in 107 innings. The Middlesex League Liberty MVP, Grady finished her career with 291 strikeouts and a 1.40 ERA. Grady will attend Endicott College.

Imbimbo was dominant on the mound for Burlington as the junior compiled seven shutouts and 231 strikeouts in 110 innings. The Middlesex League Freedom MVP had two no-hitters on the season. Over the last two seasons Imbimbo has 391 strikeouts. She is verbally committed to continuing her playing career at Merrimack College.

Kannan was stellar in every respect for the Grey Ghosts batting .429 while also pitching to the tune of a 0.66 ERA to go with 199 strikeouts to just 12 walks. The 2022 Dual County League MVP, Kannan is set to continue her playing career at Brandeis University. She is a four year honor roll student.

The four-time Gatorade Player of the Year recorded a 17-4 record with 317 strikeouts in 149 innings, finishing with a stellar 0.38 ERA. She also helped herself at the plate, batting .394 with six triples, five doubles and a .697 slugging percentage. The Merrimack Valley Conference Player of the Year will pitch at UMass-Lowell.

Larkin was a force at the plate as a sophomore batting .561 with 10 home runs and 32 RBI. Including her terrific freshman season, Larkin now has 10 home runs with 86 RBIs in two years. The Tri-Valley League MVP, Larkin also plays volleyball and basketball.

A South Shore League All-Star, Machado struck out 173 in 120 innings while also batting .367 with four doubles and a .444 on-base percentage. The sophomore plays for South Shore Chaos on the club circuit. The junior is primed to be one of the top players in Massachusetts next spring.

Malley tortured opposing pitchers all spring long and finished with a .567 average to go with 12 home runs and 50 RBI. The Rockets first baseman finished her career as a three-time Middlesex League All-Star. Malley was also a member of the Rockets varsity basketball team and she will continue her basketball playing career at St. Lawrence University.

Mendonca was at the center of Taunton’s state tournament run going 14-1 inside the circle with a 2.05 ERA while also batting .322 with eight extra base hits and 17 RBI. Mendonca’s performance helped lead Taunton to the Div. 1 State Title. She will play for Fitchburg State University where she will major in elementary education.

The senior went 17-4 with a 1.14 ERA. She notably threw a perfect game back on April 11 and finished the year with 201 strikeouts. Newhall is committed to continuing her playing career at Saint Anselm.

Peterson capped off her high school career in style going 15-2 with a 1.69 ERA and 218 strikeouts in 107.1 innings. Over her junior and senior campaigns, Peterson combined for 241 strikeouts in 125.1 innings. Also a captain of the volleyball team, Peterson will continue her softball career at Salve Regina University.

The Tri-Valley League’s Most Valuable Player, Pizzarella followed up an impressive sophomore season with an even better junior year. The Mohawks captain is a member of National Honor Society and plays with the Polar Crush on the club circuit in the summer.

Powderly hit .584 with 28 RBI and 33 runs scored as the centerpiece of Walpole’s lineup. The Bay State League Herget MVP, Powderly finished her career with a .551 average, 109 hits, and 84 RBIs. The senior shortstop is headed to UMass to study engineering.

Raposo was a standout on the field in every respect for Dighton-Rehoboth. The senior batted .494 with eight home runs and 34 RBI while on the mound striking out 194 in 124 innings. Raposo will continue her playing career at St. Thomas Aquinas while studying mathematics.

A Tri-Valley League MVP, Rose hit at a .614 clip to go with an eye-opening 38 stolen bases and 22 RBI. A National Honors Society Vice President, Rose is one of the top students in the state. Rose promises to be one of the top high school players in 2023.

Ryan was at the center of Tewksbury’s run to the Div. 2 state title game earning MVC Div. 2 Player of the Year. A two-time Boston Herald All-Scholastic, Ryan was the Redmen’s ace and slugger in the middle of the order. Ryan is also a member of Tewksbury’s basketball team and National Honor Society.

Sherwood clobbered five home runs to go with 27 RBI while hitting at a .405 clip. Also a member of the hockey and cross country teams, Sherwood will continue her playing career at Worcester Polytechnic Institute.

A two-time captain, the junior catcher batted .537 with three home runs, 38 RBI and an impressive 26 extra base hits. A defensive dynamo behind the plate, Silva picked off six runners, threw out 11 more and allowed just one stolen base in 25 games. A member of the National Honor Society, Silva sports an outstanding 3.8 GPA. In the offseason, Silva competes with the Rhode Island Thunder Gold

The junior shortstop batted .359 with 25 runs scored to earn Merrimack Valley Conference first team honors. Also a member of National Honor Society and a first team All-Conference selection in soccer, Tardugno is pursuing an athletic career at the next level.

Welch was one of the top arms in the Bay State in 2022 pitching to the tune of a 2.16 ERA with 171 strikeouts in 123 innings. The junior now has 250 strikeouts for her career. A member of National Honor Society, Welch will be one of the premier pitchers in the area in 2023.