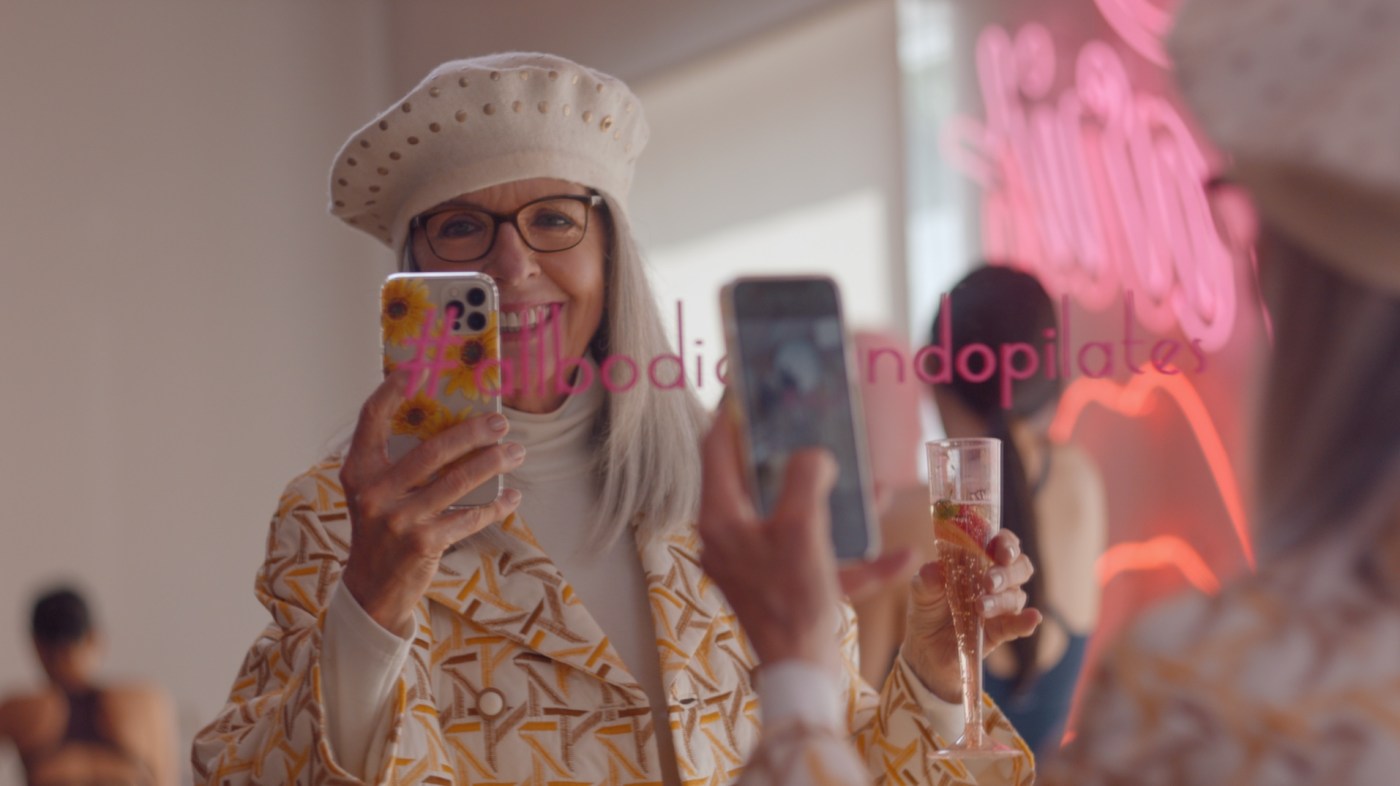 Keaton and actor Elizabeth Lail (“Gossip Girl”) play the same lead character — Mack aka Rita — at opposite ends of the age spectrum. Mack (Lail) is a struggling young writer (as her agent, Patti Harrison is one of the film’s few highlights). Mack’s best friend Carla (Taylour Paige, “Zola”) is getting married. Mack was raised by her vivacious grandmother (Catherine Carlen) and claims to have an “inner old gal.” She lives with her dog Cheese (Get it? Mack and Cheese), and has some romantic interest in her next door neighbor and occasional dog sitter Jack (Dustin Milligan, TV’s “Schitt’s Creek”), a skateboard enthusiast who makes a living as a “private wealth manager.”

In Palm Springs with Carla and their friends for a bachelorette party, Mack sees a tent advertising “regressions,” and she leaves her friends to explore. Inside, she finds a strange man named Luca (Simon Rex, “Red Rocket”). He puts Mack inside a tanning bed and miraculously (and I mean miraculously), she emerges in the form of 70-something Keaton. Mack reveals the truth to Carla, and they agree that Mack will pretend to be Mack’s Aunt Rita until they can figure out how to get Mack back to being her 30-year-old self again.

Carla rents Rita a vintage Thunderbird. But the tent with the tanning bed is gone, and Rita goes back to her place in Los Angeles, claiming to be Mack’s Aunt Rita. What follows is for the most part not funny or clever. Rita and Jack enjoy a flirtation that is supposedly a variation on what 30-year-old Mack was missing out on. Rita joins Carla’s mother’s “wine club.” That the members of the club are Carla’s mother (Loretta Divine) and acting veterans Wendie Malick, Lois Smith and Amy Hill (TV’s “Magnum P.I.”) helps.

Academy Award winner Keaton (“Annie Hall,” “Reds”) has a Pilates misadventure that is supposed to be some sort of Lucille Ball-like comic disaster. But it cannot be salvaged. Vintage clothing-wearing Rita becomes an internet sensation and an “influencer,” opening the door to brand endorsements. She becomes a ”glam-ma.” After drinking mushroom-infused tea, Rita has a conversation with Cheese in a trippy montage. Will newly in-demand Rita miss Carla’s rehearsal dinner for a Marie Claire Summit in Santa Monica?

It’s hard to believe that Keaton and Lail are the same person. Lail needed to work harder on imitating her famously imitate-able co-star. I’m not sure what Rex is doing in this film. Did he make it before “Red Rocket” was released? The camera loves Paige, even in this mess. “Mack & Rita” can be as dumb as a proverbial post. But its cast makes it watchable. How much did Barnes & Noble pitch in to be the setting of the final scene? Too much.