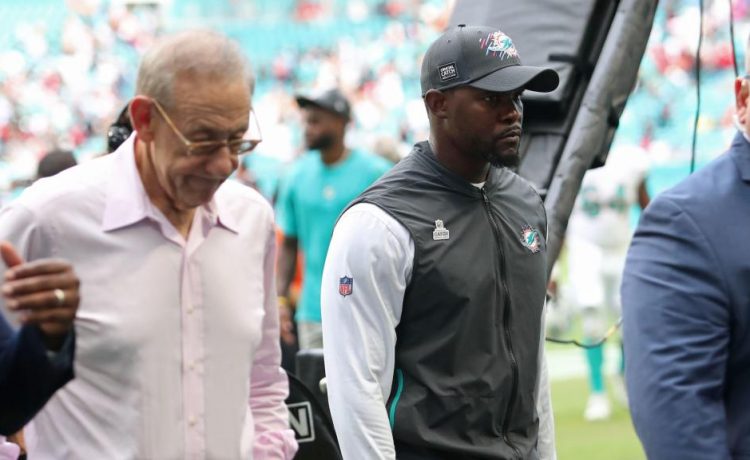 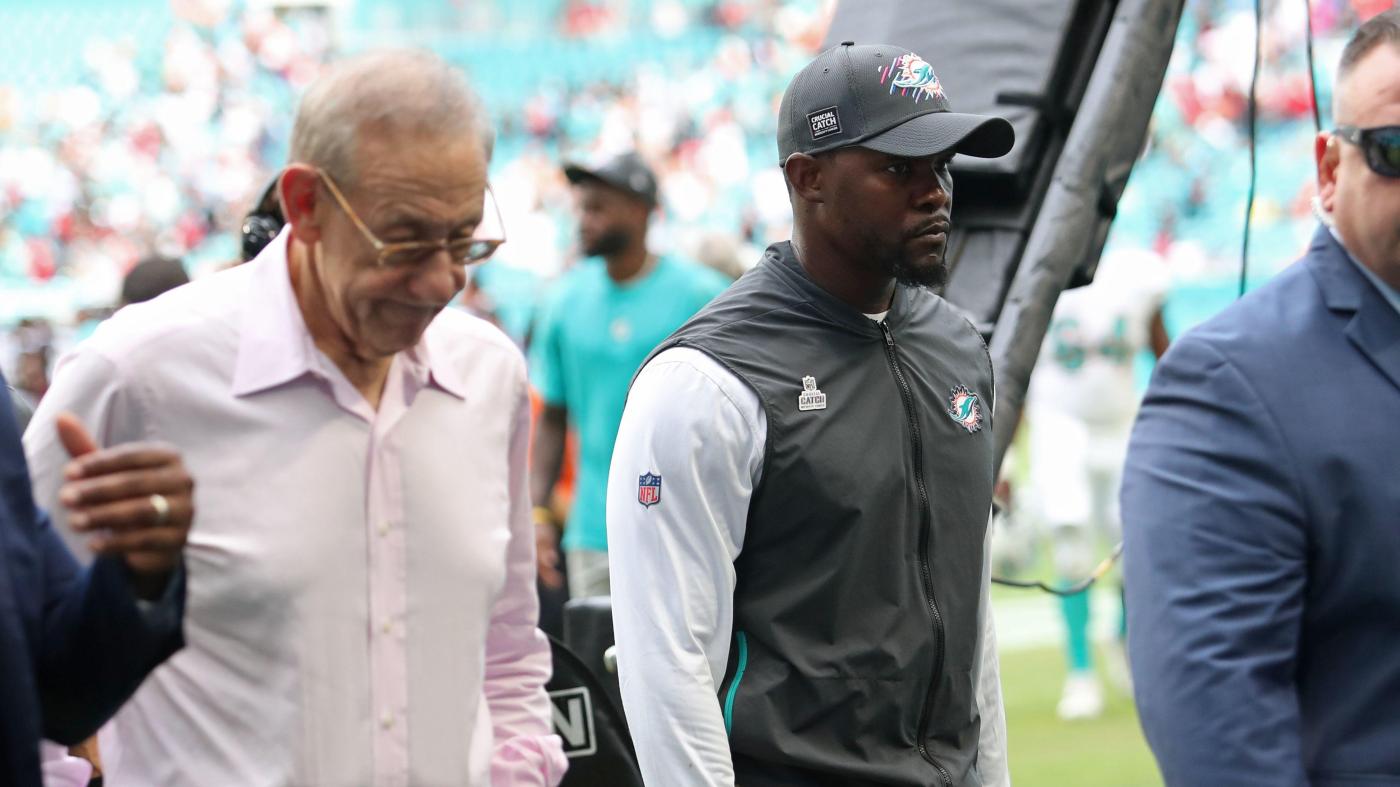 This is the week for the Miami Dolphins where all their worlds collide.

Owner Steve Ross is done with his suspension as of Monday. Ex-coach Brian Flores, whose allegations against his former team sparked the penalty, returns to South Florida as Pittsburgh Steelers senior defensive assistant and linebackers coach in prime time on Sunday night.

The Dolphins’ undefeated 1972 team is being celebrated for its 50th anniversary. The current Dolphins, who looked strong in starting 3-0, have gone 0-3 since, the latest loss being Sunday’s 24-16 defeat to the Minnesota Vikings.

It all comes together as Miami (3-3) hosts Pittsburgh (2-4) on NBC’s national stage in an 8:20 p.m. kickoff at Hard Rock Stadium, the Dolphins’ first “Sunday Night Football” appearance since a 2017 home loss to the Oakland Raiders.

Flores decided he was coming after Ross, the Dolphins and the NFL as a whole after he was surprisingly fired by Miami the Monday following the conclusion to the 2021 season last January. He filed a class-action lawsuit alleging racist hiring and retention practices around Black coaches.

Among claims in his lawsuit, Flores said Ross offered him financial incentive to tank, or lose games purposely to improve draft positioning, and pressured him to participate in tampering for a player that had not yet become a free agent, which he did not name but was quarterback Tom Brady.

A six-month NFL investigation, led by former U.S. Attorney and SEC Chair Mary Jo White, concluded that the Dolphins did not intentionally lose games in the 2019 season and any $100,000 offer to do so that Flores claims was not meant to be taken as a serious offer. On the tampering front, however, the NFL deemed that Miami had “impermissible communications” with Brady in the 2019-20 season and again in 2021. It also said the Dolphins did the same with New Orleans Saints coach Sean Payton’s agent, Don Yee.

The NFL took away the Dolphins’ 2023 first-round draft pick and 2024 third-round selection, fined Ross $1.5 million and suspended him through Oct. 17 (Monday).

According to the NFL’s release on Aug. 2: “During this period, he may not be present at the Dolphins’ facility and may not represent the club at any team or NFL event. He may not attend any League meeting prior to the Annual Meeting in 2023, is removed from all League committees indefinitely.”

A league spokesperson told the South Florida Sun Sentinel that Ross was not banned from attending games during that time.

Flores was fired after going 24-25 in three seasons leading the Dolphins, but Ross cited his communication and collaboration as the reason for the move.

In the midst of that reunion of a disconcerting era in Miami’s franchise history, the Dolphins will be celebrating a time that was unblemished.

Members of the 1972 “perfect” team, which went 17-0 en route to the franchise’s first of two Super Bowls, will be honored during pregame and halftime ceremonies against the Steelers. The current Dolphins will wear throwback jerseys with a commemorative patch.

Miami has been decimated by injuries in the three-game losing streak. Quarterbacks. Cornerbacks. Offensive tackles.

The hope is those concerns are behind the Dolphins. Tagovailoa is in line to return after he cleared concussion protocol Saturday, following the frightening Sept. 29 head injury that had him taken off the field in a stretcher.

Backup quarterbacks Teddy Bridgewater and Skylar Thompson, who also couldn’t finish their respective starts the past two weeks, had to play behind an offensive line bookended by backup tackles: Greg Little and Brandon Shell.

Coach Mike McDaniel said starters Terron Armstead and Austin Jackson were close to returning against the Vikings. Maybe they’ll be ready against the Steelers.

Although the Dolphins got All-Pro cornerback Xavien Howard back into the lineup against Minnesota, Nik Needham went down with a torn Achilles on Sunday, his season now over. The Dolphins still have fellow cornerback Byron Jones on the physically-unable-to-perform list for lower left leg surgery in the offseason, upstart undrafted rookie Kader Kohou missed Sunday’s game with an oblique injury and Keion Crossen exited the game with a knee ailment. Third-year cornerback Noah Igbinoghene is being counted on, and special teamer Justin Bethel is being asked to play defense for the first time this season.

The Dolphins are 3-3 against the most challenging part of their schedule, especially with the last two opponents, the Jets and Vikings, surprisingly 4-2 and 5-1, respectvely.