Todays Though > News > Tanner Houck blows the save, but Xander Bogaerts saves the Red Sox in 5-4 win over Yankees
News

Tanner Houck blows the save, but Xander Bogaerts saves the Red Sox in 5-4 win over Yankees 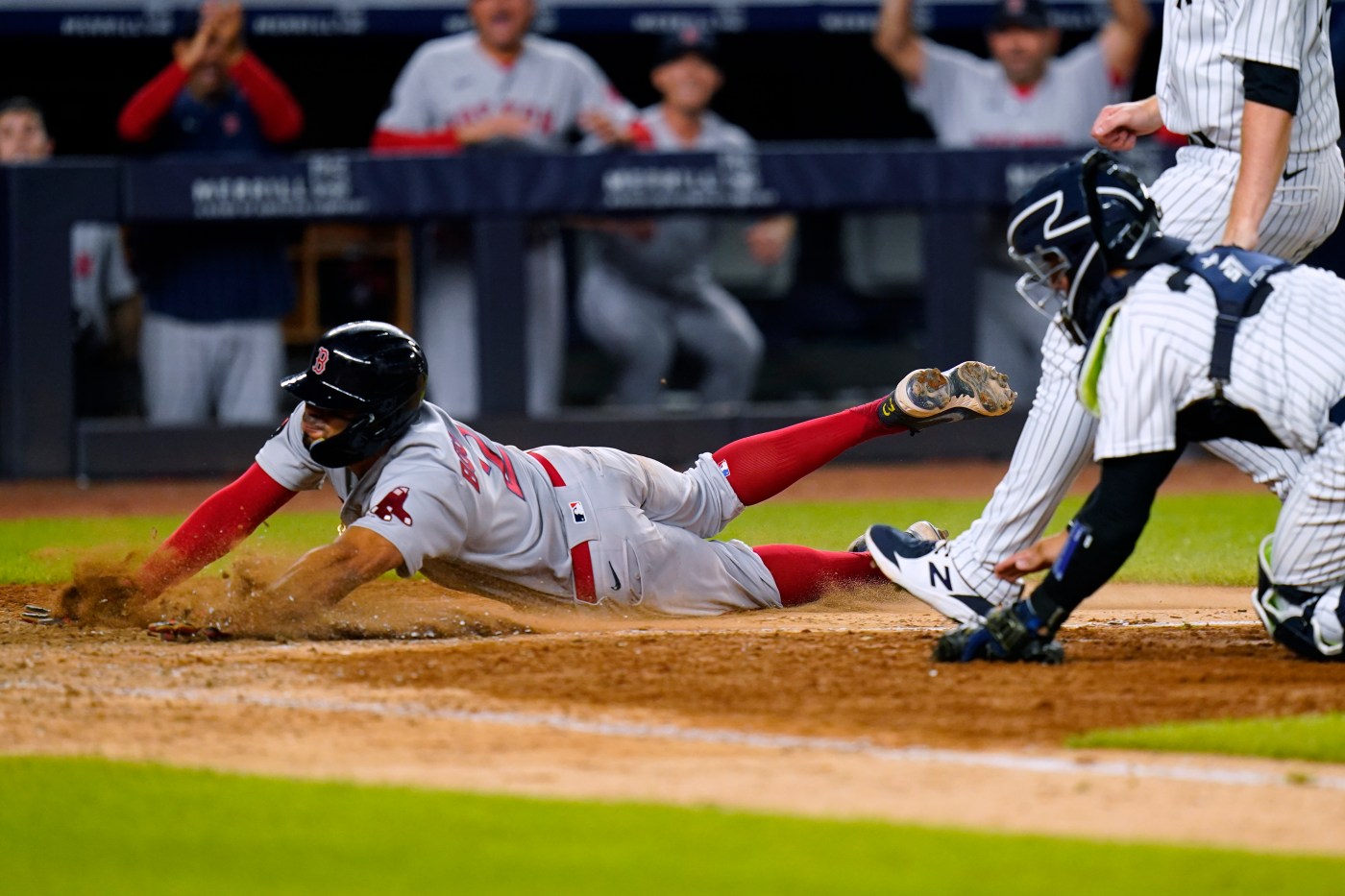 Less than two weeks after getting seven stitches in his leg, Xander Bogaerts used every bit of his speed to win the Red Sox a key divisional game on Friday night.

After Tanner Houck blew the save in the ninth inning and the Sox performed some magic tricks to extend the game to the 11th, Bogaerts started the inning as the ghost runner on second and then ran his way home for the eventual game-winning run in the Sox’ 5-4 victory over the Yankees.

On a deep fly ball to left, Bogaerts adeptly tagged up from second to third, using a head-first slide to avoid the throw and move 90 feet from home. Two batters later, with two outs, Yankees right-hander Michael King skipped a pitch off his catcher’s face mask and Bogaerts made a daring dash for home, sliding past Jose Trevino as the go-ahead run.

Ryan Brasier locked the door for the save in the bottom of the inning and the Sox stole a win in front of a sellout crowd of 47,573 at Yankee Stadium.

Eovaldi and Garrett Whitlock, both on the injured list since June 9, both returning on the same day, carried this game.

Handed a 2-0 lead thanks to a Rafael Devers homer in the first inning, Eovaldi wasn’t sharp nor particularly strong, but was good enough to attack the zone and force the Yankees to beat him.

Working his way through a potent Yankees’ lineup that entered the game ranked as MLB’s best offense (5.3 runs per game), Eovaldi was doing just fine until the third inning, when he spotted a cutter on the bottom part of the zone and Giancarlo Stanton did what Stanton does. With a flick of the wrist, Stanton pummeled a three-run homer over the short right-field fence with an exit velocity of 105 mph off the bat. It wasn’t a cheapie, like so many in right field at Yankee Stadium are, as the ball traveled an estimated 398 feet for Stanton’s 24th homer of the season.

Eovaldi survived until the fifth, when he recorded one out and was removed by manager Alex Cora while the score was tied, 3-3.

Eovaldi didn’t look particularly pleased with himself, having thrown 53 strikes on 78 pitches while allowing six hits and two walks and striking out four. His average fastball velocity of 95 mph was 2 mph lower than normal, and he wasn’t spinning the ball particularly well either. But he was good enough to keep the Sox in the game and turn it over to the bullpen.

2. Whitlock is back, and the Sox’ bullpen looks drastically different.

On any other night, if the Sox had to rely on the bullpen for 4-2/3 innings, they probably aren’t going to win that game.

But with Whitlock back in the bullpen for the first time since April, the Sox’ bullpen has an entirely new shape.

John Schreiber, fresh off his game-losing outing against the Rays, bounced back with 1-2/3 scoreless innings in this one. His velocity was also down a bit, but he generated some weak contact and got some help with a terrific double-play turn by Xander Bogaerts, who corralled Dalbec’s wide throw from first base, transferred it to his throwing hand and hurled it to first while falling to the ground for a remarkable twin-killing that ended the fifth inning.

Pitching in his first big league game since he allowed four runs in a four-inning start against the Angels on June 7, Whitlock was amped up when he entered in the seventh inning. Throwing with 1-2 mph more velocity than average, his pin-point placement of his sinker made it nearly impossible for the Yankees to handle.

He made quick work of it in the seventh, then smoothly cut down Aaron Judge, Anthony Rizzo and Stanton in a 10-pitch eighth in which he struck out Judge and Stanton.

It was probably the easiest Cora’s job has been all season as he handed the ball from Schreiber to Whitlock to Tanner Houck.

Still, Houck made a mess of it in the ninth, earning the Red Sox’ 21st blown save of the season when he couldn’t make a simple throw to third base on an attempted sacrifice bunt and allowed the game-tying run to score. But he magnificently turned a double play with the bases loaded to escape the ninth, and needed another double play to get out of the 10th without any damage.

It was Houck’s first blown save since becoming the Sox’ closer on June 10. He had been 6-for-6 in save opportunities up until this one.

There’s something about these Yankee games that brings out the best in Dalbec.

Facing the flame-throwing Aroldis Chapman in a tie game in the seventh, Dalbec got a 2-2 slider at the bottom of the zone and blasted it deep into the left-field bleachers to give the Sox a 4-3 lead.

Of Dalbec’s seven homers this year, six have given the Red Sox a lead. Three have come against the Yankees.

It looked like it’d be enough until Houck blew the save, but Bogaerts saved his team with some aggressive baserunning in the 11th