The best of Butler not enough against Warriors – Boston Herald 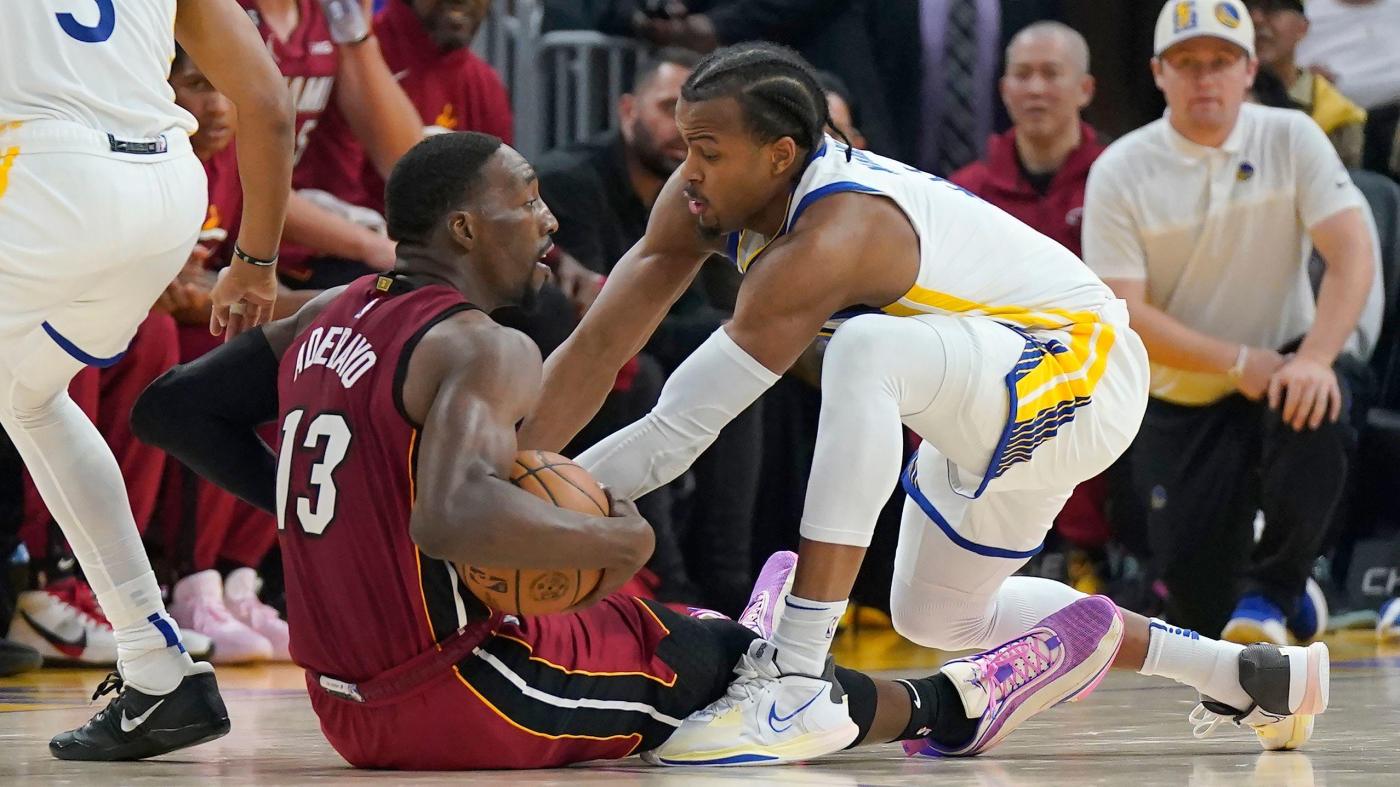 Observations and other notes of interest from Thursday night’s 123-110 loss to the Warriors:

– These are moments when Jimmy Butler reminds of how he got the Heat to the 2020 NBA Finals and within one shot of the 2022 Finals.

– But more dogged and determined?

– It would have been easy to mail in the second night of a back-to-back against the rested defending NBA champions.

– Instead, Butler tried to do it all.

– But the roster is imperfect.

– Or at least a work in progress.

– But in big moments, there remains a Butler way.

– Which keeps the Heat a threat.

– And well again could have Butler as a threat deep into the spring.

– For now, appreciate the effort.

– Deal with the loss.

– And know that if two or three others step up at the same time, anything remains possible.

– For the fifth time in their six games, the Heat opened with Bam Adebayo, Caleb Martin, Butler, Tyler Herro and Kyle Lowry.

– The exception had been when Martin was suspended for Monday night’s loss to the Raptors.

– But the rotation was altered even before the opening tip, when backup center Dewayne Dedmon was ruled out with plantar fasciitis in his left foot.

– And that was with Omer Yurtseven not only still out with an ankle impingement, but also sent back to South Florida earlier in the day.

– Limited in the frontcourt, the Heat activated undrafted rookie Jamal Cain for just the second time, with Cain limited to 50 games on the active roster with his two-way contract.

– Max Strus and Nikola Jovic, in the void of big men, were first off the Heat bench.

– They were followed by Duncan Robinson and Gabe Vincent.

– Bam Adebayo is now one appearance from 350 regular-season games.

– Butler’s third attempt moved him past Jamal Mashburn for 23rd on the Heat all-time list.

– Butler’s third basket moved him past Josh Richardson for 20th on the Heat all-time list.

– With his first steal, Butler passed Rony Seikaly for 14th on the Heat all-time list.

– Adebayo’s fourth basket moved him past Kevin Edwards for 13th on the Heat all-time list.

– Butler’s fourth rebound moved him past Kevin Willis for 26th on the Heat all-time list.

– In a somewhat odd twist, the Heat sent Yurtseven back to South Florida on Thursday after he traveled ostensibly only to be with the team at Wednesday’s shootaround and game in Portland.

– The team said the return home was not because of a setback with his ankle impingement.

– “I actually think he is making progress,” coach Erik Spoelstra said pregame. “We wanted to just get him checked out, and then he’ll train there and then hopefully he’ll be able to ramp up when we get back.”

– Spoelstra added, “It was really to just have him with us, and then training him, and then we met. And then we thought he would benefit more there. And like I said, hopefully when we get back, he’ll start to prepare and get ready to play.”

– Warriors coach Steve Kerr went in downplaying whether it was any type of early-season showdown.

– “I’m not really concerned about who we are playing right now,” he said. “I think it’s really just about us getting better each day and trending in the right direction. We have so many things that we have to improve, so whether we are playing Miami, Charlotte, or Detroit, it doesn’t matter.”

– The game completed the second of the Heat’s 14 back-to-back sets this season, coming off Wednesday night’s victory in Portland. The Heat split their previous back-to-back set, losing at home last Friday to the Celtics and then defeating the visiting Raptors on Saturday night.

– Former Heat forward Andre Iguodala continues to work his way back into shape after deciding to play another season with the Warriors, noncommittal at shootaround regarding a target return date.

– Iguodala said he will know because his body will tell him.

– “I have a load that I’m looking for, an analytical load,” Iguodala, 38, said. “There’s a number that you want to have as an output with the devices that we wear, the tracking devices. I’ve hit that a couple of times and we know how many times a week I need to hit that.”

– If the Warriors needed further fuel for Thursday night, it was provided by Charles Barkley, who offered harsh takes on Klay Thompson and Draymond Green after TNT’s coverage of the Warriors’ Tuesday loss in Phoenix.

– Said Barkley, “This team is older. That’s what’s really happening to them. As much as I love Klay, he’s slipping. Same thing with Draymond. They’re not the same. In the Finals, you can see they’re not the same guys they were two or three years ago. So when I watch the Warriors play, I say, ‘Oh man, Father Time is knocking on the door of a couple of those guys.’ “

– Barkley took it a step further with Thompson.

– “There was a time when Klay Thompson was the best two-way guard in the NBA and he’s not the same guy and that’s because of injuries,” Barkley said. “Is he done? No, I don’t think he’s done. I think he’s slowing down and it’s catching up with him, that’s why he’s frustrated.” Thompson was ejected from that game in Phoenix.

– That, Barkley said, means the Warriors have to ride the wave with their younger players and count even more on Stephen Curry.

– “Steph got a lot more work to do now,” Barkley said. “Those young guys really are going to have to step up or this team is not going to win the championship if those young guys don’t start carrying the team.”

– Thompson scored the Warriors’ first five points Thursday. He had only two in Phoenix before he was ejected.