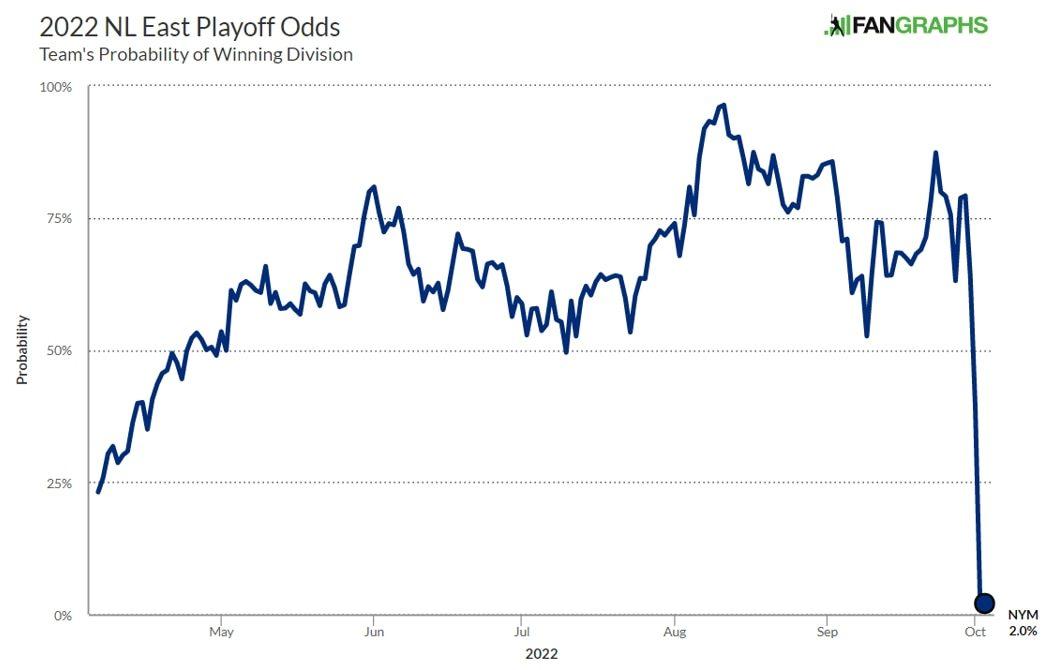 The dream is dead.

One of the dreams, at least. The Mets are not going to win the National League East unless the Braves forget what time their next three games begin. Barring a few dozen professional athletes oversleeping by 72 hours, give or take, they will clinch their fifth straight NL East title in the extremely near future, sending the Mets to a wild card series.

The Mets can still blaze their way through the playoffs, reach the World Series for the first time since 2015 and make all of this a humorous memory. But the disappointment is undeniable, especially for a team that had a 10.5-game lead over Atlanta in early June.

In breaking down both teams’ seasons, it’s abundantly clear that Atlanta won the division, the Mets did not lose it. The Braves are an unfathomable 77-32 since the calendar flipped to June, immediately reversing course after putting up losing records in April and May. That is a winning percentage north of 70 percent, making the Mets’ 64-44 record in the same time frame (.592 winning percentage) look like a relative failure.

With the Mets sitting two games back of Atlanta with three to play, and their chances of winning the East now down to 2.0% per FanGraphs, a look back through their schedule shows us the exact moments they let things slip away. Getting swept in Atlanta over the weekend was obviously the biggest one — the Mets’ odds of winning the division were at 79.2% on Sept. 29, the day before the calamitous series at Truist Park began — and Atlanta had some of their own moments that shifted the odds dramatically, but these parts of the season are the ones that the Mets will want back.

From June 2 to June 12, the Mets lived exclusively in California. They started with four games at Dodger Stadium, then headed south for three in San Diego before closing with three more against the Angels. The Mets went 5-5 in those games, a perfectly respectable stretch for an east coast team playing on the opposite side of the country.

But during those same 11 days, the Braves did not lose once. Atlanta’s turning point was its 14-game winning streak in June, a period that overlaps with the Mets simply breaking even in Southern California. While the Mets were soaking up the sun and a few too many losses, the Braves stormed through Colorado, then went home and took care of Oakland and Pittsburgh.

The Mets’ chances of being division champions sank from 76.1% on June 2 to 59.3% on June 11, a day they lost handily to the Halos. That west coast voyage started with a highly contested two-run loss to the Dodgers, but each of the other four losses were by at least five runs, an unknown harbinger at the time.

On July 10, the Mets lost 2-0 at home to the Marlins in ten innings. The very same day, the Braves walked off the Nationals in the bottom of the twelfth. That brought Atlanta within 1.5 games of the Mets, giving the Amazin’s their slimmest lead since April 16. It also put the Mets’ odds of winning the division under 50% for the first time since April.

A July 23 loss to the Padres — a potential playoff opponent, and one that the Mets went 2-4 against in the regular season — brought the Mets their first three-game skid of 2022.

Lasting until July 23 before losing three in a row is a mighty impressive feat, and once again speaks to how well the Braves have had to play to derail the Mets’ consistency train. But with Atlanta polishing off their fifth win in six games on July 23, the Mets’ trio of L’s opened the door. Atlanta crept within a half game as the Mets’ division odds dropped from 59.8% to 53.4% in one day.

August was very kind to the Mets. They welcomed Jacob deGrom back from injury, had a winning record against Atlanta during the month, and went 19-11 overall. On the 11th, they had a seven-game cushion and a season-high 96.4% probability of wearing the NL East crown.

Then September happened. Going 2-4 in a six-game stretch against the Nationals, Pirates and Marlins will doom any contender that late in the year. That’s exactly what happened to the Mets, and even though they bounced back to spear the Marlins in the next two games, this is when things started to feel lost. An embarrassing three-game sweep at the hands of the Cubs followed — and then, yes, a six-game winning streak — but the Sept. 9 loss in Miami was a major wake up call that the Mets failed to answer.

The Mets dominated the Marlins this year, full stop. They went 13-6 against Miami and outscored them 101 to 61. Still, the losses seemed to come at the worst possible times. Their Tuesday night home loss to the Fish on Sept. 27 let the Braves tie them in the standings, as Atlanta was putting a bow on a four-game heater.

That loss caused the sharpest downturn in the NL East graph before the death blow in Atlanta. The Mets plummeted from 87.4% on Sept. 23 to 63.1% following the 6-4 loss to Pablo Lopez and his crew.

Other factors of course contributed to the Mets losing their grip — a trade deadline that was both terribly underwhelming then and now, Starling Marte’s injury and the bullpen running a 4.66 ERA for the last two weeks chief among them — but those five on-field events are the biggest non-Brave reasons why the Mets will be playing a wild card game series this weekend.