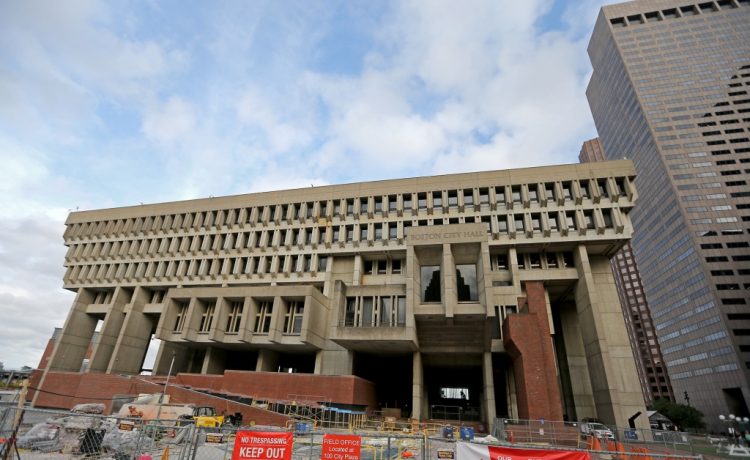 Boston’s aging City Hall is in something of a transitional period, in line for significant amounts of work as the five-and-a-half-decade-old lump of concrete provides its own unique challenges to maintain.

“Things have changed in how people use buildings and what’s required, and we hope to update this building to make it last for many years in the future,” Property Management Commissioner Eamon Shelton told the Herald, noting both legal mandates and changes in technology. “There’s an intent to make this building work.”

What can charitably be called one of Boston’s most distinctive buildings, the stark, blocky Boston City Hall is either reviled or beloved, depending on who you ask. But one thing’s for sure: it’s not going anywhere, and it’s going to be the subject of serious capital spending and maintenance focus as pipes and other parts of it reach the end of their useful lives and create issues that are pricey and tricky to fix.

“A lot of the equipment that either we’ve been replacing or we have plans in the capital program to replace is either near or at the end of its useful life,” Shelton said, noting that much of it is the original material put into place in the 1960s.

So we’re going to see increasing amounts of maintenance work there, and more spending designated in future capital budgets?

“It’s absolutely coming up,” he said. “I would expect to see that on an ongoing basis.”

Boston City Hall is a striking Brutalist structure started in 1963 and opened in 1968 in what previously had been the Scollay Square neighborhood that the city — as it seemed to have a passion for doing at the time — bulldozed in favor of the current Government Center area.

Opinions on the building itself split sharply, with some, including Mayor Michelle Wu, whose offices make up a large chunk of the fifth floor, defending it as a beautiful example of that architectural style, while many others rag on its chunky, concrete-heavy appearance.

The city’s current rolling five-year capital budget includes more than $188 million for City Hall-area improvements, though that encompasses a nearby city building and improvements from the $95 million “Phase 1” overhaul — originally budgeted for $70 million — of the northern half of the City Hall plaza that’s currently wrapping up.

The somewhat smaller Phase 2 of the plaza project is down for $50 million with plans expected to come out in the next few months. That phase takes aim at the southern half as well as changes to City Hall itself, largely focusing on entrance accessibility and the fourth-floor “courtyard.” Another idea, Chief Operating Officer Dion Irish told the Herald last month, is to pull out the oft-busted escalators between the second and third floors and replace them with an elevator that spans the first four levels.

Shelton added that a big project to replace the HVAC system is ongoing, as is replacing the aging elevators. Next on the menu is swapping the building’s lighting fixtures with ones that are more efficient, and continued changes to many pipes that are now approaching retirement age.

In addition to the city’s staff of maintenance workers, they’re also paying out $2.4 million this year in outside contracts. That includes cleaning, security, some of that HVAC and elevator work and pest control, according to data from the city.

Then there are the isolated incidents that end up costing quite a bit. Per data provided by the city, there’s what the city characterizes as “Repairs to City Hall Plaza staircase after car attempts to drive down” this past May that ran $30,095.

The most expensive one-off repair project of at at City Hall of the past few years was a $43,452 heating pipe leak right above the Herald’s ninth-floor press office.

That one provides a good case study for some of the challenges that come with doing maintenance on a building that’s essentially just made of concrete.

Once the city identified that the pipe above the top floor was providing this different kind of undesirable leak into the Herald’s bureau office than the normal ones it’s concerned with, staffers had to take somewhat extreme measures, at one point having to jackhammer through a foot of concrete on the roof just to get to the pipe in question.

“It’s a lot easier to cut a hole into drywall and patch it as opposed to cutting through, you know, a concrete block,” Shelton said of these types of challenges that he said he expects to keep seeing. “It’s going to be complicated. We’re likely going to have to move people around. We’re likely going to have some of the same challenges with accessing some of this pipe that’s embedded in concrete.”