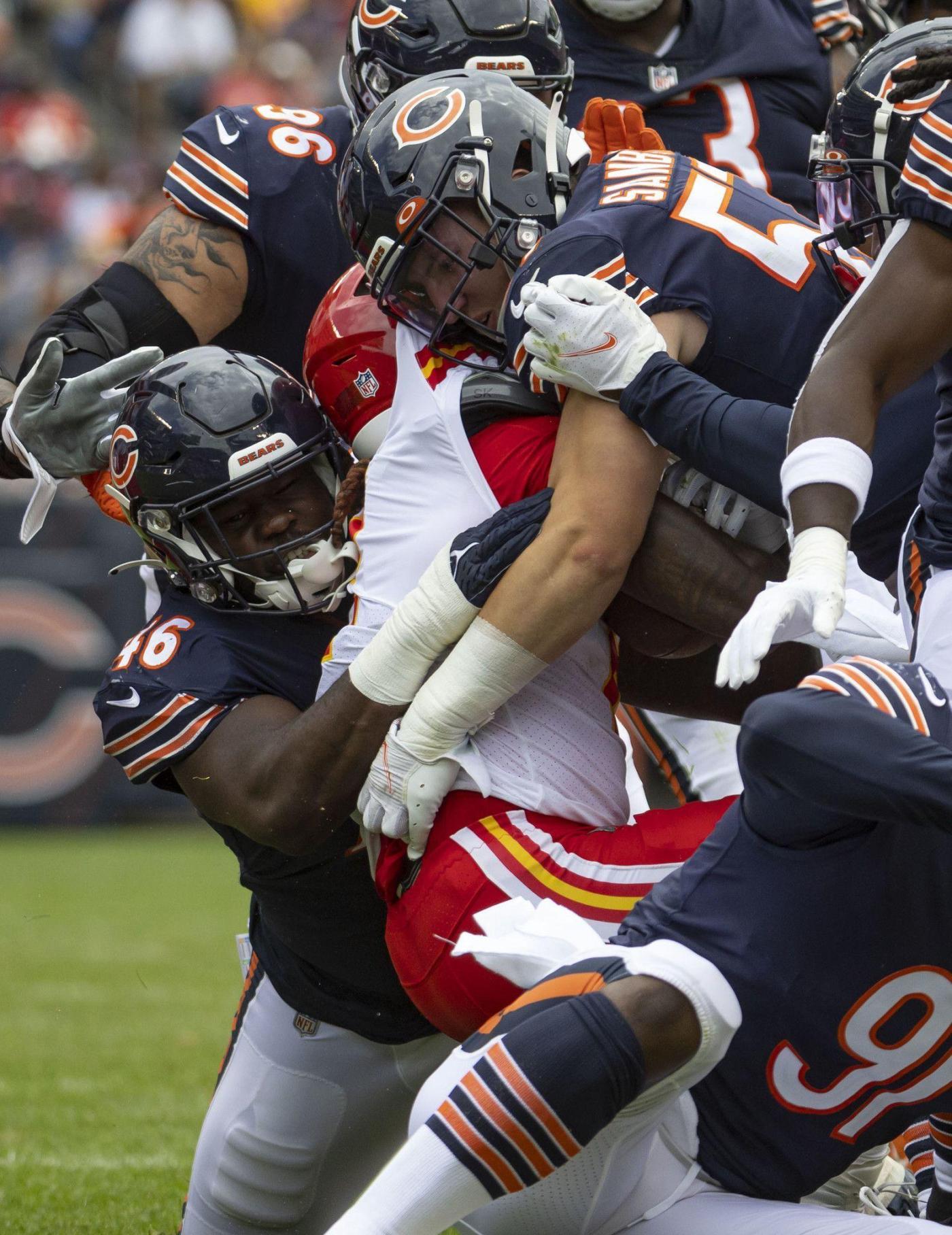 Before his first NFL preseason game Saturday, Chicago Bears safety Jaquan Brisker had announced a goal of forcing a turnover. “Immediately,” the rookie told reporters earlier in the week.

Brisker only came close to a takeaway in the Bears’ 19-14 victory over the Kansas City Chiefs — and he said he actually needed a bit of time to get comfortable — but the second-round pick still could leave Soldier Field feeling pretty good about his debut.

On the Chiefs’ fourth series, Brisker delivered a big hit against wide receiver Skyy Moore, took down running back Derrick Gore for a 2-yard loss and nearly intercepted Shane Buechele’s pass intended for Noah Gray. Sure, the plays were against second-stringers, but it was enough to leave an impression on Bears coach Matt Eberflus.

“The tackling. Deflecting the ball,” Eberflus said. “He should have had maybe a takeaway or two. But he was high-energy. Man, he likes to hit. I really liked that aggressive style for him, how he’s playing right now.”

The Bears’ two other Day 2 draft picks — cornerback Kyler Gordon and wide receiver Velus Jones Jr. — sat out with injuries. So the debut of Brisker, who is likely to start alongside veteran safety Eddie Jackson, was among the most notable Saturday.

“I had to get warmed up at first,” Brisker said. “It was great being in the stadium and playing next to great guys like Eddie and the rest of the defense. I thought it was a great experience for the first time.”

Brisker finished with four tackles, a tackle for a loss and a pass defended, one of a few rookie standouts on a day made for such performances.

Running back Trestan Ebner, a sixth-round pick out of Baylor, opened eyes with a versatile performance on offense and special teams. And undrafted rookie linebacker Jack Sanborn, a product of Lake Zurich High and Wisconsin, had a part in two second-half takeaways.

“Draft pick or no draft pick, it doesn’t matter — you want to earn the respect of the guys in this locker room and you want the coaches to see why they picked you or why they decided to let you come here,” Ebner said. “That means the most, when I can get love from these other guys and show them I’m meant to wear this ‘C’ on my head and I’m meant to be a part of this team.”

When Ebner returned to the sideline after leaving Chiefs defensive back Jaylen Watson in his wake with a nasty cut, his teammates told him, “Oooh, I didn’t know you could cut like that.”

“I didn’t know what they were talking about because to me it felt like I was just out there running,” Ebner said. “And then I saw it on the big screen, I was like, ‘Oh, that was a nice cut.’ ”

Ebner admitted he was rewatching the highlight of his 27-yard run on his phone when reporters approached him in the locker room after the game.

The run was part of a well-rounded day that included a 12-yard touchdown catch on a throw from Trevor Siemian, with Ebner pounding through three Chiefs defenders for the Bears’ first score of the preseason. Ebner also had two kickoff returns covering 53 yards, including a 34-yarder on the opening kickoff.

Ebner said he was nervous about getting in on offense, especially because the first-quarter running back reps went to Khalil Herbert with David Montgomery sidelined by a minor injury. But Herbert returned to the sideline between series to tell him what he was seeing, and that calmed his nerves.

Ebner has a lot of talent around him in the running back room with Montgomery and Herbert, and the Bears have several kickoff-return options too. So Ebner felt good about being able to show off his skill set.

“He’s very competitive,” Eberflus said. “He likes when the lights come on and you can see him compete in practice. He’s a strong runner and he’s obviously got a lot of good speed, too, so he can really turn it on to get the corner or take it the distance. So we’re excited where he is too. And he’s doing a better job blocking, finishing runs.”

The Bears had a short field before Ebner’s touchdown catch thanks to Sanborn’s interception of Buechele on the Chiefs’ opening drive of the second half. Sanborn returned the pick 13 yards to the Chiefs 27.

“I knew they were going to try to pick on the linebacker there in Cover-2,” Sanborn said. “I was fortunate enough to make a decent break and box out the receiver there and make a play.”

On the Chiefs’ third drive of the third quarter, Sanborn pounced on Gore’s fumble, which Mike Pennel forced, and the ensuing Bears drive ended in a Cairo Santos field goal.

Sanborn, who guessed he had “a lot” of family members and friends at the game, had five tackles, including a one for a loss, and two special-teams tackles, a good impression as he fights for a roster spot.

“I’m going to be that guy that will do whatever the coaches ask or whatever the team wants,” Sanborn said. “Just take it day by day and be consistent with everyone.”