Seyfarth Synopsis: In EEOC v. BNSF Railway Co., Case No. 8:21-CV-369 (D. Neb. April 28, 2022), Judge Brian C. Buescher of the U.S. District Court for the District of Nebraska denied the EEOC’s request for a temporary restraining order (“TRO”) to prevent alleged discriminatory conduct.  The EEOC sought an order reinstating an employee, Rena Merker, to work and prohibiting BNSF from engaging in retaliatory action against employees who seek to cooperate with the EEOC in its pending lawsuit against BNSF.  Though the District Court ultimately found that the EEOC failed to demonstrate the requisite factors for obtaining a TRO, this decision is important because of the focal basis for the District Court’s denial of the EEOC’s motion.  The District Court ruled that because the claim in the pending lawsuit was that Merker was subjected to a sexually hostile work environment, but the TRO request was based on alleged retaliation, it was impossible for the EEOC to demonstrate the likelihood of success factor necessary for relief.  Given this inconsistency, the EEOC’s motion failed on its face.  This case is a must-read for employers faced with EEOC-related litigation, as such an arguably basic flaw could serve as a critical defense to these types of motions.

In BNSF, Merker, a train conductor, filed a charge of discrimination with the EEOC on January 18, 2018, alleging on behalf of herself and other aggrieved individuals in non-management positions that they had been subjected to a pattern and practice of gender discrimination, sexual harassment, sex discrimination, and retaliation for opposing such alleged discrimination and harassment.  Id. at *1-2.  On November 24, 2020, the EEOC issued a letter of determination stating that the EEOC had reasonable cause to believe that BNSF violated Title VII because Merker and other female employees were subjected to harassment and Merker was disciplined for complaining about the alleged harassment.  Id. at *2.  The EEOC was unable to reach a conciliation agreement with BNSF.  Id.

While the motion to dismiss was pending, BNSF terminated Merker for alleged attendance issues.  Id.  Before the District Court entered the above-mentioned decision on the motion to dismiss, the EEOC filed a TRO request with the District Court to immediately reinstate Merker’s position and from retaliating against female employees from cooperating with the EEOC in the pending lawsuit.  Id.

The District Court denied the EEOC’s motion.  At the outset of its analysis, the District Court held that the EEOC could not prevail on its motion because the amended complaint in the pending lawsuit did not state a claim for retaliation — the very basis for its request for a TRO.  Citing Carson v. Simon, 978 F.3d 1051, 1059 (8th Cir. 2020), the District court explained that while no single factor of the TRO analysis is determinative, the “probability of success factor is the most significant.”  Id. at *15-16.  “This factor requires the movant to demonstrate at least a fair chance of prevailing,” or an “adequate showing of a nexus between the unlawful conduct and the responsible individuals.”  Id. at *16 (citations and quotations omitted).  Critically, the District Court observed that the likelihood of success “is considered in light of the elements of the movant’s claim.”  Id.  In BNSF, the EEOC argued in support of its request for a TRO only that it is likely to succeed in proving BNSF terminated Merker in retaliation for the EEOC’s lawsuit based on her charge of discrimination.  That claim, however, is missing from the amended complaint — which only alleges hostile work environment — and therefore could not substantiate the crucial factor (likelihood of success) of its TRO request.

The District Court nevertheless evaluated the merits of the EEOC’s TRO motion and found that it failed to show irreparable harm because the EEOC failed to demonstrate an emergency, a TRO would be unlikely to preserve the status quo, and the EEOC failed to demonstrate irreparable harm from Merker’s termination.  Specifically, the District Court found the EEOC’s attempted bureaucratic excuse for failing to file the TRO for more than two weeks unavailing: “If the EEOC wishes to file TRO actions, it must comply with the law to do so.  This means it must find a way to timely file a TRO, just as any other party must do . . . .”  Id. at *20.  Further, the District Court held that the EEOC’s request for relief was not proper preliminary injunctive relief, but rather affirmative relief — reinstatement of Merker’s position.  Id. at *21.  Lastly, the District Court found a lack of irreparable harm from Merker’s termination because the EEOC failed to offer sufficient evidence supporting a “but for” connection between the EEOC lawsuit and her termination.  Id. at *22.  Rather, the evidence offered by BNSF demonstrated a rich disciplinary record relative to Merker which BNSF argued was the cause of her termination, and the EEOC failed to offer sufficient evidence to suggest otherwise.

Employers faced with TROs should be mindful of BNSF because it highlights a rather basic defense that could be overlooked when scrambling to defend these motions under strict time-constraints.  In BNSF, the District Court rejected the EEOC’s attempt at obtaining immediate relief for something that, though related to the underlying lawsuit, was not specifically alleged in the pending complaint.  When the EEOC or other plaintiff files a TRO, employers and their attorneys should first look to whether the operative complaint specifically alleges the claim that provides the underlying basis for the TRO.  If there is an inconsistency in such respect, employers should rely on BNSF in arguing that the motion should be denied. 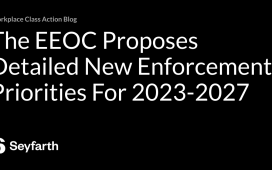