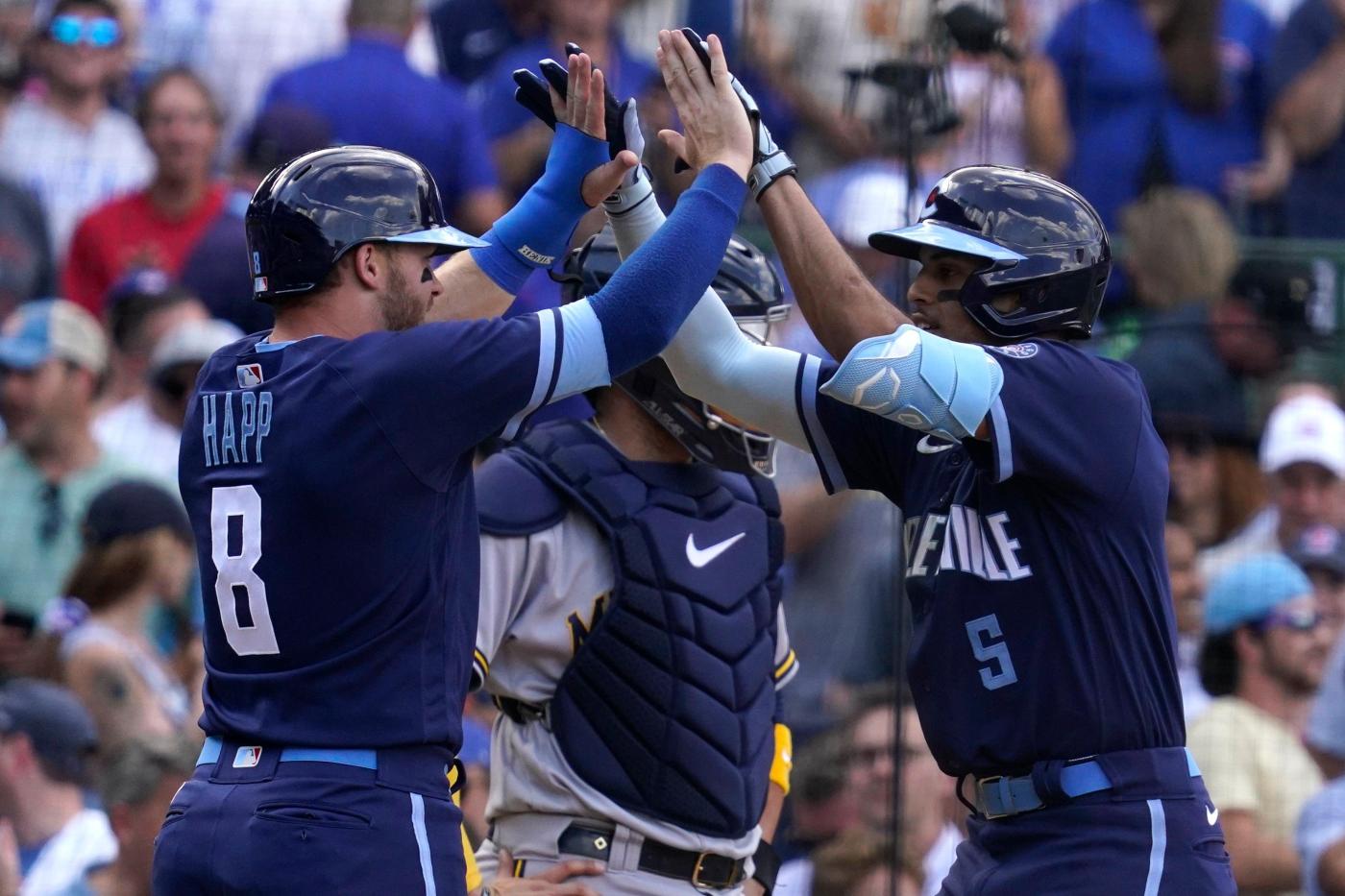 The Chicago Cubs on Friday began a stretch of 14 games in 17 days against the Milwaukee Brewers and St. Louis Cardinals, facing off against the two teams battling for the National League Central crown.

It’s a chance for David Ross’s team to prove its recent run of success is no fluke and for the Cubs to have some say in a race they’ve been out of since falling nine games on May 8.

“We’re going to find out what we’re made of,” second baseman Nick Madrigal said. “As of late we’re playing some great baseball. We have some good teams coming up, but I’d run this team out there with anyone now.”

The Cubs started the stretch on the right foot Friday, staging a 8-7 comeback win over the Brewers before 39,962 semi-engaged fans at Wrigley Field.

The Cubs have won eight of their last 11 games, though mostly against the likes of rebuilding teams such as the Cincinnati Reds, Washington Nationals and Miami Marlins. Now the games carry more weight, and the Cubs responded with the kind of emotion you see from teams fighting for a playoff spot.

With jet fighters flying over Wrigley practicing for this weekend’s Air and Water Show, the perfect weather streak continuing for its second straight week and beer-cup stacking taking precedence over the action in the bleachers, Friday was the kind of day in which the action on the field took a back seat to the simple pleasures of enjoying a day game at Wrigley Field.

But those who bothered paying attention were treated to a great back-and-forth game that included three Madrigal hits, home runs from Patrick Wisdom and Christopher Morel and another triple by Franmil Reyes, who quickly has become a fan favorite.

Reyes legged out his second triple in only nine games with the Cubs in the first inning, then scored on Ian Happ’s infield hit. Reyes had only three career triples in 481 games with the San Diego Padres and Cleveland Guardians.

Is it the shoes?

“Just taking advantage of what the game gives you,” Reyes said. “That’s one more thing that shows people you have to hustle every time. If I didn’t get to third and stayed on second, I wouldn’t have scored on the infield single Ian had there.”

The addition of Reyes and the return of Madrigal from the injured list have coincided with the Cubs’ hot streak. Standing together they have the feel of a fun-sized candy bar stacked next to a giant-sized bar, proving the game can be played by players of all shapes and sizes.

“This new opportunity, there are many players that don’t get a second chance,” Reyes said. “I’m very blessed to have gotten it.”

The Cubs trailed 2-0 out of the gate but led 4-2 after two innings. They trailed 5-4 in the fifth but took the lead back on Wisdom’s two-run home run off Aaron Ashby. After the Brewers reclaimed the lead by scoring a pair of runs off reliever Kervin Castro in the sixth, the Cubs responded with Morel’s go-ahead, two-run home run off Hoby Milner in the bottom of the inning.

Cubs starter Keegan Thompson endured his third subpar performance in four outings, allowing five runs on six hits and three walks over 3 ⅔ innings. The Brewers hit three home runs off Thompson, whose ERA has risen from 3.16 to 3.97 since the start of August, mirroring the end of last season. After moving to the rotation a year ago, Thompson posted a 7.11 ERA over his last five starts, increasing his overall ERA from 2.21 to 3.38.

“He’s probably got some fatigue setting into the season,” Ross said. “We’ll take a big-picture look at that and make sure everything is on the up and up, health-wise.”

Thompson might get a rest down the stretch with Wade Miley potentially returning from the IL soon. Kyle Hendricks is heading to Arizona for a rehab assignment and deserves an opportunity to get a couple of starts in September to enter the offseason on an up note.

With the summer coming to a close, what matters most for the Cubs is getting their minds right for what they hope will be a turn-the-corner season in 2023.

Morel, one of the bright spots of this season, has three home runs in his last eight games. He said Reyes’ presence has helped the Cubs become a unit. Reyes was playing baseball with his kids after the game, watching his young daughter run around as if it were her playpen.

“You’ve been able to see it, right?” Morel said through an interpreter. “He came in, he’s making us feel more united, more like a family. You see his enthusiasm. Every time he’s here he talks to us, tells us to give our all every day and things will flow. And you can see they’re flowing.”

Morel then performed an impression of Reyes talking about hitting the triple, lowering his voice a few octaves and saying, “I’m trying.”

Reyes also struck out three times, and that swing-and-miss problem was one of the reasons the Guardians gave up on him. But Reyes wasn’t frustrated, saying he just missed on some pitches.

“Everything is good,” he said. “Tomorrow a new mentality. Same plan. I’m crushing it.”