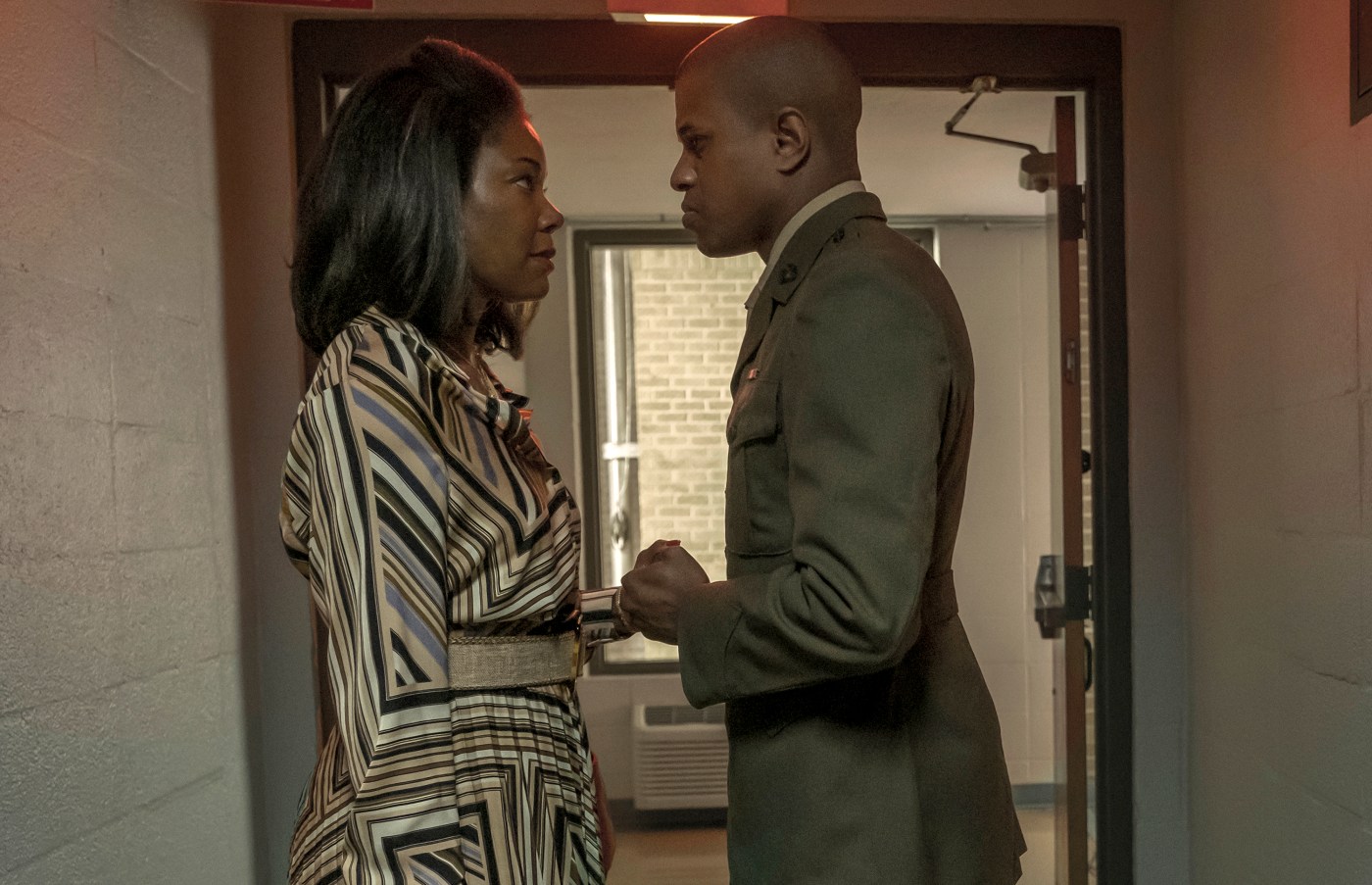 Written and directed by Elegance Bratton and based on his own life story, “The Inspection” comes out of the blue to knock you off your feet. It’s a gay “An Officer and a Gentleman” for a new generation and a new world. Ellis French (a remarkable Jeremy Pope) is a young, homeless gay man with, we assume, a drug history. When he knocks on the door of his prison guard mother (an unrecognizable Gabrielle Union, also a producer), she acts like she’s about to be assaulted. “Are you in trouble?” she asks lighting up a cigarette. She lays out newspaper for him to sit on, no doubt fearing he has bugs. You know the history between these two is terrible. Ellis, 25,  declares that he is enlisting in the Marines, a sign at least that he knows he needs to turn his life around. She has never been able to accept that her son is gay and is scornful of the prospect of his becoming a Marine.

Known as “French” to the drill instructors and his fellow recruits, French fits in relatively well at Parris Island, South Carolina at first, although he feels compelled to pretend his mother is his “girl,” when he leaves a voicemail in the presence of others. But an incident in the showers that he could not control marks him as gay, and he is ostracized and forced to stay in his own space. His group’s leader Harvey (McCaul Lombardi, “American Honey”) despises French and uses homophobic slurs in reference to him. In a shocking scene, French is severely beaten by his fellow recruits. French chooses to endure whatever punishment is served up to avoid expulsion. Oddly enough, the toughest and top-ranked drill instructor Laws (Bokeem Woodbine, channeling his inner Louis Gossett Jr.) is not terribly perturbed to know that French is gay. Laws treats all recruits like his job is to keep them out of the Marines.

Among the things you notice about “The Inspection,” beyond the uniform excellence of the cast and dignity Pope brings to French, however low he has fallen, is the film’s impressionistic sound design and score by the experimental pop band Animal Collective. We hear drums and horns; voices fade in and out. “The Inspection” also gives us such “Full Metal Jacket” moments as the buzz cuts that turn recruits into naked-skull-ed twins. One of the recruits is a Muslim named Ismail (Eman Esfandi), He bonds with fellow misfit French until it becomes known that French is gay. Another drill instructor, Rosales (Raul Castillo, another standout), reaches out to French, which French welcomes, but misinterprets. On movie night, Laws makes the recruits watch his favorite film, the 2005 Gulf war drama “Jarhead.” Laws has a great line when he spies French’s war-painted face. Woodbine seizes the opportunity to try to top the aforementioned Gossett, Clint Eastwood and R. Lee Ermey, and he is wonderful to behold. “The Inspection” offer no easy answers about its characters. French invites his mother to his graduation. But it doesn’t go as you expect. It’s certain that this is not all going to end in hugs. Bratton is currently at work on “Hellfighter,” a drama about the World War I military unit known as the Harlem Hellfighters with Jon Batiste as soldier and jazz pioneer James Reese Europe. After seeing “The Inspection,” I’m eager too see this next effort. But I am content for now to recommend “The Inspection” and hope to see Pope, Union, Woodbine and Castillo in the awards mix this year.