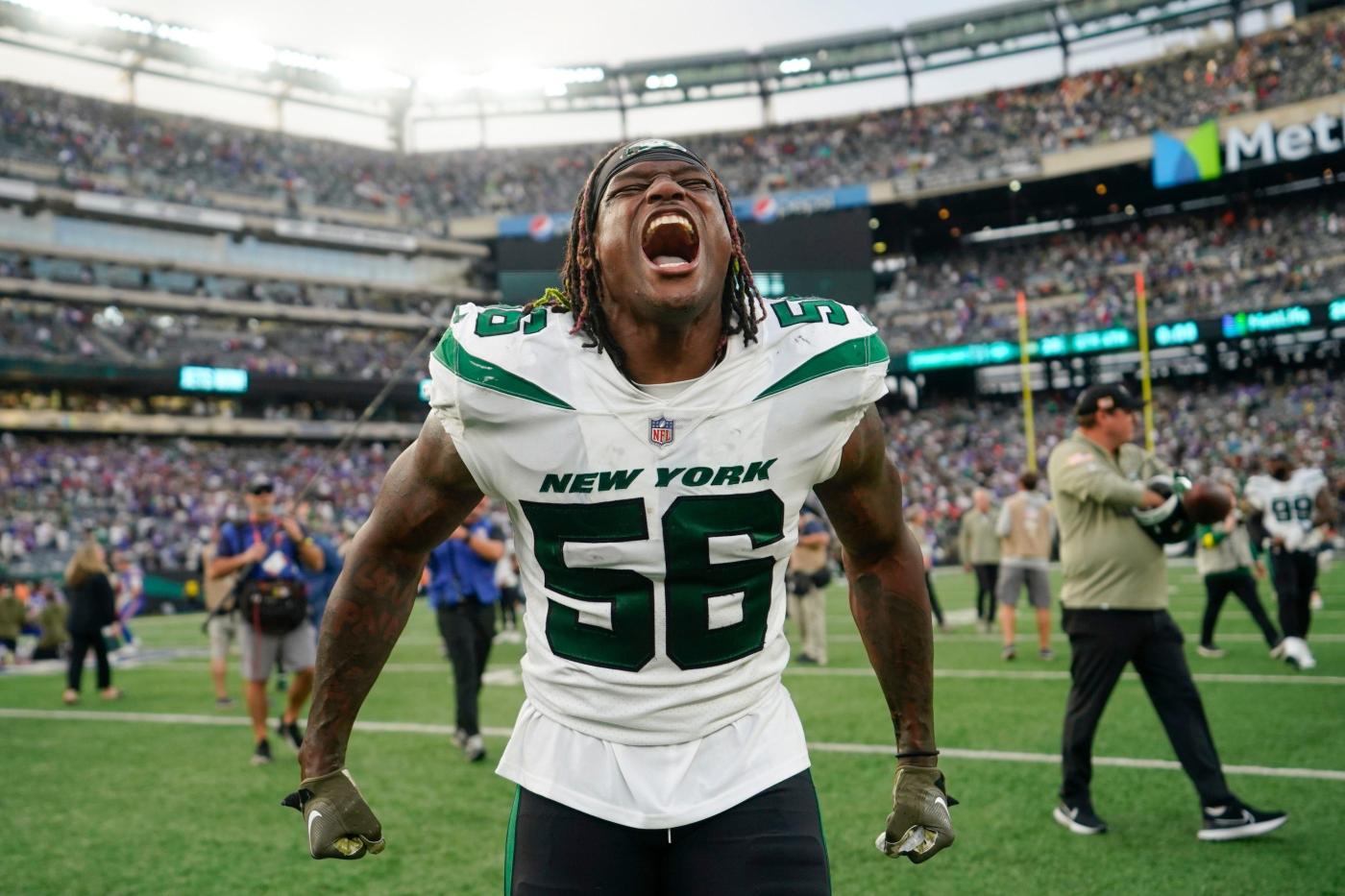 After the Jets played the Bills last January, coach Robert Saleh said the team needed to close the gap in the AFC East.

On Sunday, mission accomplished as Gang Green shocked everyone in their 20-17 victory against the Bills.

Following last week’s disappointing loss to the Patriots, the Jets entered the game against the Bills 12.5-point underdogs. David beating Goliath victories don’t happen much in the NFL, but the Jets win against a Bills team who are considered the favorites to win the Super Bowl is as close as it gets.

Even at 5-3 before the game, the Jets had naysayers saying they defeated quarterbacks like Jacoby Brissett, Skyler Thompson and Brett Rypien. But the Jets not only contained a Bills offense that was No. 1 in the league, but they made Josh Allen look like an average NFL quarterback.

“Anytime we can get a win in the division, it’s huge,” Jets wide receiver Garrett Wilson said. “We wanted to prove something this week and we did that and big win.

It was a huge win indeed for the Jets. Not only are the Jets just a half-game out of first place in the AFC East, but they will remain in playoff contention as the team will be on a bye next week. The Jets entered the weekend fifth in the AFC in terms of seeding and they will remain there for at least another week.

The most significant difference this season has been Gang Green’s defense. Last season, the Jets had the worst defense in the NFL as they allowed 397.6 yards per game. Coming into the weekend, the Jets ranked sixth in total defense [311.4 yards per game] and 11th in points allowed [19.9].

Sunday, Saleh and his staff put on a masterclass on how to contain the best offense in football. The Jets sacked Josh Allen five times as he completed 18 of 34 passes for 205 yards, zero touchdowns and two interceptions.

Quite simply, the Jets outcoached Bills coach Sean McDermott and his coaching staff, as they didn’t make enough adjustments to pick up the win. This is a game the Jets wouldn’t have belonged in a year ago, more or less actually win it down the stretch.

Last offseason, the Jets added D.J. Reed and Ahmad “Sauce” Gardner at cornerback and the two players already are the best tandem in the NFL. Also, getting Carl Lawson back from injury and Quinnen Williams playing at an All-Pro level certainly would help any defense.

“We have some good players,” Saleh said. “Knock on wood, our d-line is healthy, playing a relentless style of football. Our secondary — DJ and Ahmad, got beat on that first play on that double move, but he still stayed poised and kept himself in the game.

“He wasn’t even phased by it. Our safeties — Jordan [Whitehead], had a chance at another one today, our second pick of the day. I feel like the communication has been so good and the precision with which we’re playing in the backend has been so much better than a year ago.

“When you mix in that rush and coverage and obviously Brick (Jeff Ulbrich), I’m going to go overboard for Brick and his staff. The amount of work they’ve been putting in and the amount of conversations to try to put these guys in the best positions possible. Just collectively, just everybody, Joe Douglas bringing in great players, players executing at a high level. coaches doing their best coaching.”

The Jets defense didn’t make the biggest statement of Sunday, it was made by quarterback Zach Wilson. After hearing all the criticism from media members and talking heads on television this week, Wilson out-dueled arguably the best quarterback in the NFL in Allen.

Wilson completed 18 of 25 passes for 154 yards, one touchdown and zero interceptions. He did turn the ball over on a strip sack by Von Miller, but that was one of the few mistakes Wilson made the entire game.

That was a massive change from last week when Wilson completed 20 of 41 passes for 355 yards, two touchdowns and three interceptions in the 22-17 loss to the Patriots. New England capitalized on Wilson’s mistakes as it scored 10 points off turnovers, which was the difference in a close game.

Throughout his ups and downs, the Jets have continued to place faith in Wilson, as they believe he is the team’s quarterback of the future. Since returning from his meniscus injury last month, Wilson has led Gang Green to a 5-1 record in his six starts this season.

His numbers won’t blow anyone away, as Wilson has thrown for 1,202 yards, four touchdowns and five interceptions. But he is providing what the Jets need right now, as they have a good enough running game and defense to qualify for the postseason. If Wilson can continue to take care of the ball and play boring football, the Jets could win double-digit games for the first time since 2015.

For Wilson and the Jets, they’re just continuing to take it one game at a time as he said before the week started that they had the players to win a game like this. But winning a game against a Super Bowl favorite is something the team will enjoy through the bye week.

“No one in our locker room is sitting there saying, ‘We won that game against a backup quarterback,” Wilson said.  “A win’s a win and they’re hard to come by in this league and we know the confidence that we have and I think the greatest part is nobody in that locker room cares what anybody says outside of here.

“If anybody mattered outside of here, they’d be coaches, or they’d be players. Nobody cares, Everyone is relying on each other. We’re locked in and everyone’s just working on getting better and improving.”