The Killers slay at TD Garden with pure rock spectacle 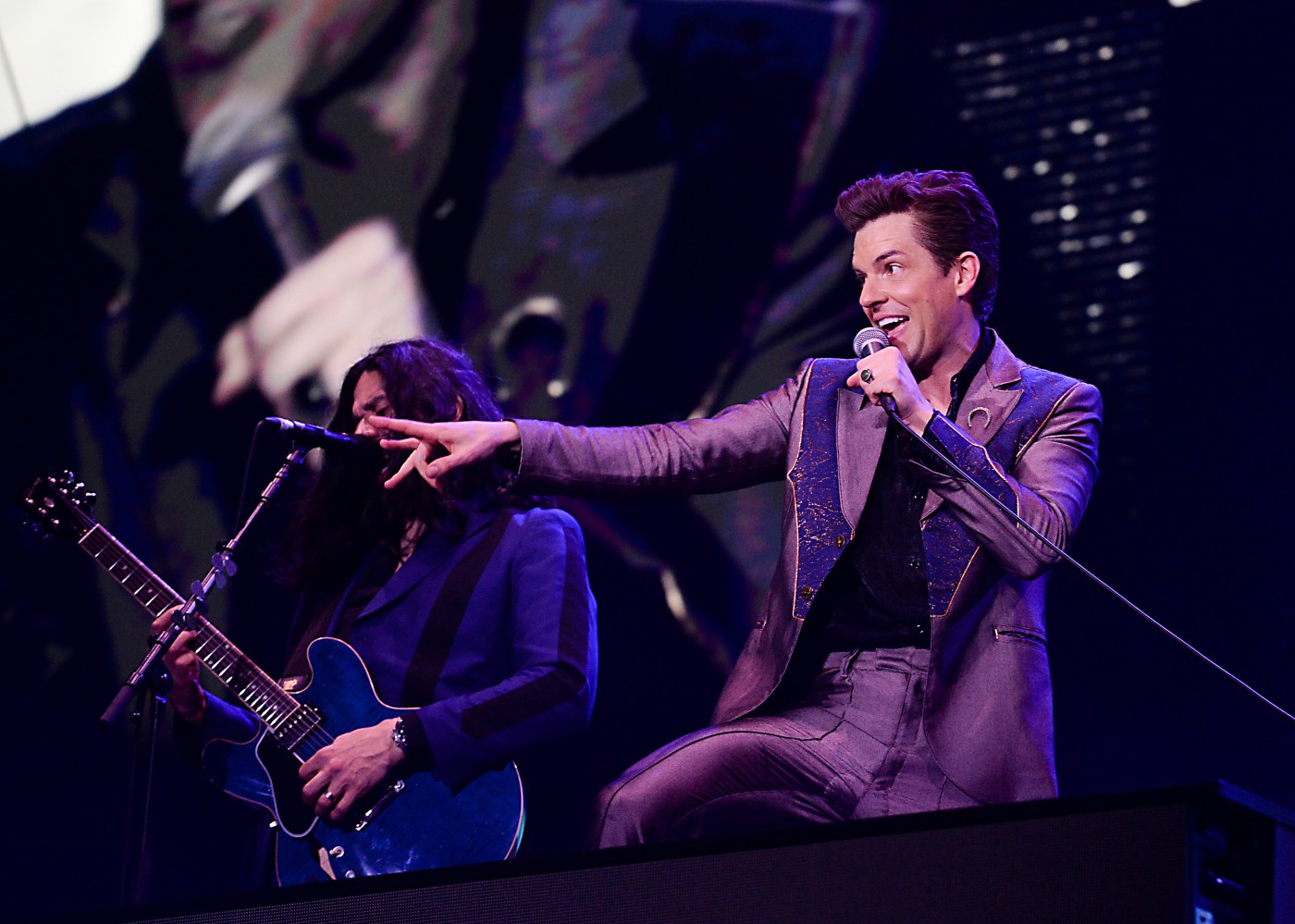 Through a cloud of confetti blasted from cannons, Brandon Flowers is stalking the stage like a caged jungle cat and shouting, “I just wanted to get back to where you are!”

Behind him, the rest of the Killers accelerate with gleeful, glamorous speed. Monday’s TD Garden show is a minute old and already a full-throttle rock spectacle.

At moments like these, I puzzle over why the Killers aren’t the most popular band in the world right now. Then I remember it’s not 1985.

The Killers get so much mileage out of imitating what dominated the mid-80s: U2 grandeur, Duran Duran glam, Smiths gloom, New Order’s melding of post-punk and new wave, David Bowie’s just-left-of-center pop, Bruce Springsteen’s broken fairy tales of middle America… Like a great ’80s act, the band – the charming, compelling Flowers, monster drummer Ronnie Vannucci Jr, guitarist Dave Keuning, and some hired guns to help out in concert – excel at bombastic and intimate art, and the spaces between the two.

So many of the early songs rush forward with sugary hooks, epic crescendos and angst-filled cries, making the heartbreak in the tunes battle to compete with the bombast. And I won’t complain a lick about that – the Killers indulging in all those hooks-crescendos-and-cries works perfectly in an arena.

The band (and the audience screaming the chorus) pushed “When You Were Young” to be taller, wider, faster, brighter. “Somebody Told Me” felt like ABBA doing a Ramones song (the highest of praise!).  “Shot at the Night” sounded like a No. 1 hit, not a song buried on a compilation.

If you haven’t been paying attention, the Killers have released two albums in the past three years, the new one, “Pressure Machine” is a soft, lonely and chilling reflection on small town life. The fragile material had mixed results on the big stage: “Cody” got smothered by the arena amplification; but the band delivered “Runaway Horses” with the absolute delicacy it so deeply deserves – it paired nicely with the ballad-style opening of the tender “A Dustland Fairytale.”

The other record, “Imploding the Mirage,” balances the Killers’ love of massive music with sweetness, sadness and nuance. Thankfully, Flowers and crew translated that rare blend to the stage with “Fire and Bone” and “Caution.”

The megaband is a thing of the past, crushed by the new century’s obsessions with pop stars, which may make The Killers the biggest underground act in the world. The band may keep the crown for years thanks to a back catalog of hits and a continuing quest to make more dynamic, stranger music – you know, the kind of stuff somewhere between “Where the Streets Have No Name,” “Love Vigilantes,” and “I’m On Fire” no one else has thought to go looking for.