Todays Though > News > The need for four play? Heat can live without it – Boston Herald
News

The need for four play? Heat can live without it – Boston Herald 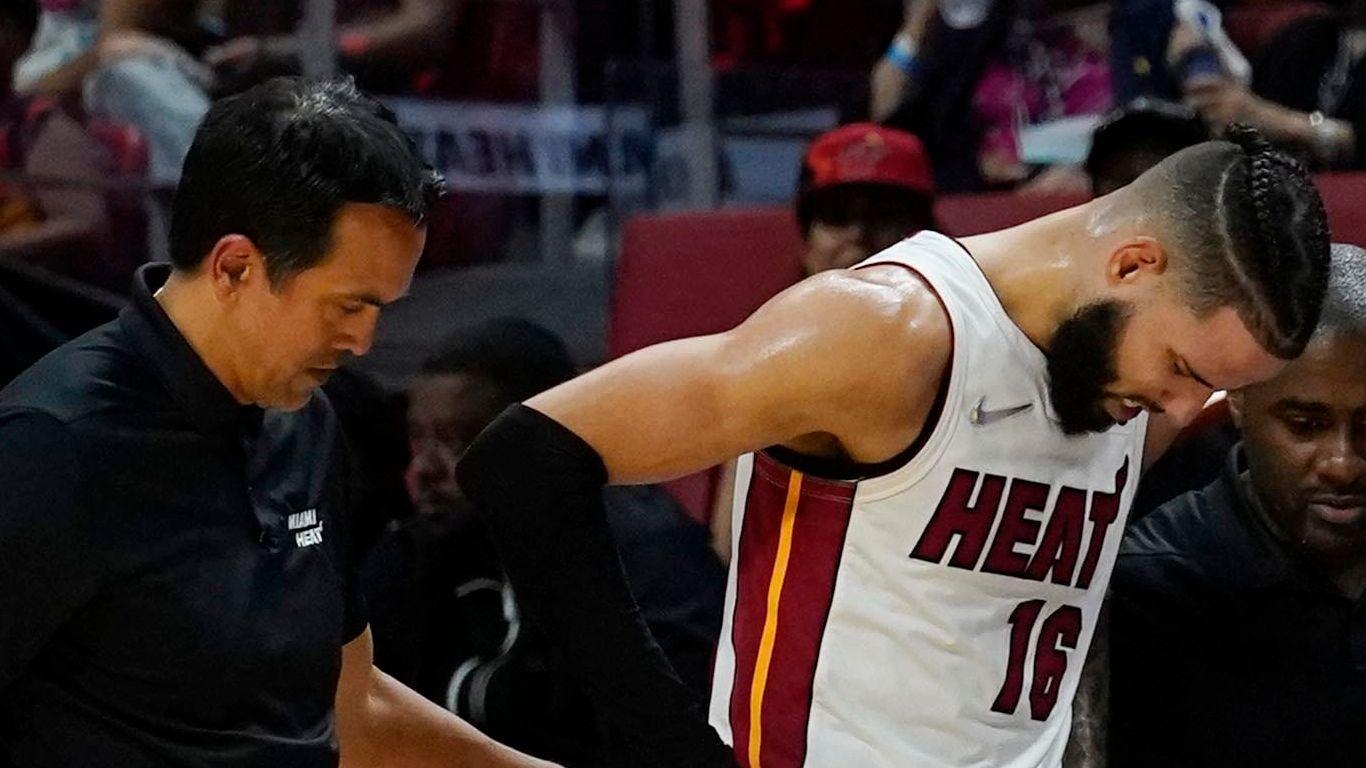 When it comes to the Miami Heat’s lineup and rotation for the coming season, this largely has been a month that has focused on four play, as in who will be the team’s starting power forward.

For weeks, there was the lament of 2021-22 starter P.J. Tucker getting away to the Philadelphia 76ers in free agency.

From there, attention turned to the re-signing of undersized Caleb Martin, the development of unproven Haywood Highsmith at summer league, and the ongoing intrigue of more minutes for untested Omer Yurtseven.

For their part, Martin and Highsmith have noted their deep dives into Tucker’s playing style and how they hope to emulate the 37-year-old veteran. For his part, Yurtseven has been emphatic about proving his value as a complement to starting center Bam Adebayo.

Then, while making an appearance at the Heat’s youth clinic at Hard Rock Stadium as part of the build up to the Rolling Loud music festival, Adebayo addressed the, well, lack of an elephant in the room by addressing the possibilities of 6-foot-5, 205-pound Martin as a starting power forward.

“Everybody on our roster has been asked to do something they’re uncomfortable with, or play a role they’ve never played,” Adebayo said. “And a lot of dudes have excelled, because we put so much work in and we put so much dedication in, that it’s our job, it’s our livelihood.

“So guys are coming, trying to make the best impression in the way they can. So I think it’ll be fine. I know Caleb, he’s probably in the gym right now somewhere. I feel like he’s going to do well.”

All of the conversation and speculation likely is making Erik Spoelstra’s head explode. He, of course, is of the belief in position-less basketball, that there are no power forwards, because there are no positions, no delineations.

In that context, if Martin does start, he will be the Heat’s starting whatever-you-want-to-call-him.

And that’s the thing, if you run down the list of current NBA starting power forwards, many are of the size, skill set and shot menu that they might just as well be defended by Jimmy Butler (or perhaps even Max Strus, should he remain a starter).

Take the Eastern Conference, with 52 of the Heat’s regular-season games and the first three rounds of the playoffs coming against that subset.

Yes, there certainly are exceptions such as Al Horford with the Boston Celtics, Giannis Antetokounmpo with the Milwaukee Bucks, perhaps John Collins of the Atlanta Hawks (who largely tends to float on the perimeter).

Otherwise, there are and will be plenty of small-forward, jump-shooting, perimeter types cast at the four in the East.

With the Brooklyn Nets, you’re talking Kevin Durant (if he stays) or perhaps Ben Simmons (whose last incarnation was at point guard).

With the Philadelphia 76ers, it would be undersized Tucker or, again, Tobias Harris.

With the Toronto Raptors, it’s looking like OG Anunoby or even some Scottie Barnes or Thaddeus Young.

With the Chicago Bulls, it is setting up at the moment as Patrick Williams.

With the Charlotte Hornets, who look to have moved beyond Montrezl Harrell and have the uncertainty with Miles Bridges, the answer could be P.J. Washington.

With the New York Knicks, who knows where Julius Randle is headed, a potential one-year wonder.

And on it goes in the conference, from Jalen Smith with the Indiana Pacers to Kyle Kuzma of the Washington Wizards, as well as the unproven youth of Paolo Banchero (or Jonathan Isaac) with the Orlando Magic, Evan Mobley with the Cleveland Cavaliers.

So you need a prototypic power forward in the East . . . because?

Many of the aforementioned East power forwards would be the very types that Martin typically would receive minutes against, players that also arguably can be defended (and smothered) by Butler.

So who is the Heat’s starting power forward?

For years, Spoelstra has been telling us there aren’t power forwards.

For years, Spoelstra’s approach has been of a coach who does not believe in big-big things in his power rotation.

Yes, Durant in Heat colors would render the debate moot.

But even with what the Heat have in place, there are ample East answers.

ACT II?: Having participated in the Jr. Heat basketball clinic at Hard Rock Stadium ahead of this weekend’s Rolling Loud music festival, Heat guard Victor Oladipo was asked about possibly reprising his Thingamajig persona from his appearance on The Masked Singer. “I wouldn’t mind putting the Thingamajig mask on and doing a little one-two step for the crowd. I think it would be nice. Maybe I could get a place in the rotation,” he quipped. “There’s never not room for Thingamajig, just being real.” Matt Zingler, a founder of Rolling Loud who helped coordinate the Heat’s clinic, said he sees the natural crossover between music and sports. “A lot of athletes want to be musicians,” he said. “A lot of musicians want to be athletes. So there’s a lot of respect there in the industries.”

STILL PUSHING: Bam Adebayo might prove able to push past last season’s disappointment of losing Game 7 of the Eastern Conference finals to the Celtics, but he apparently is not letting go of being beaten out for NBA Defensive Player of the Year the last two seasons by Marcus Smart and Rudy Gobert. “I should have won it the last two years,” Adebayo told the assembled campers at the Heat’s youth clinic, when asked about his ongoing goals, “and I will win it this year.” Caesar’s Sports Book has Adebayo as the second choice, at +700, to win 2023 NBA Defensive Player of the Year, behind only Gobert (+550), well ahead of Smart (+1000).

MOVING ON: Despite the solid play of guard Kyle Allman Jr. for the team’s summer-league roster, the Heat’s expectation is that Allman will move forward with his commitment to his French League team. Allman concluded summer league by converting the winning 3-pointer against the Clippers’ summer roster. The 6-foot-3 guard who went undrafted out of Cal-Fullerton in 2019 said during summer league he was keeping his options open. “I’m open to everything,” he said. “I can go back to Paris. Obviously we’re still negotiating stuff, but I’m open to everything right now.” Allman said it was a worthwhile experience. “They like me and I thought it was a good opportunity to play with them to showcase what I can do,” he said. “And they gave me the opportunity to play point guard, shooting guard and show my skills. So it was like a mutual kind of [agreement].”

MOVING ON: The rollercoaster year for Kyle Guy now includes a contract to play in Spain with Joventut Badalona. Guy last August played summer league for the Golden State Warriors, followed up by attending camp with the Cleveland Cavaliers, and began last season with the Cleveland Charge of the G League. He then made an instant impact as a Heat emergency addition during the team’s COVID outbreak in late December, scoring 17 points in his debut. From there, he received another Heat 10-day contract and then a Heat two-way contract on Jan. 17, lasting until he was waived on March 24, when he was waived and replaced by since-waived Mychal Mulder. Guy finished the season in the G League.

50. Over-under betting line on Heat regular-season victories in 2022-23, per BetOnLine. The Heat’s opening line was set at 48 1/2 last season, with the Heat closing at 53-29. Unlike other teams rumored to be linked to potential franchise-altering trades ahead of the season, the Heat’s futures total remains listed at most books. BetOnLine is listing “Off the board” as the current futures totals for the Lakers, Knicks, Jazz and Nets.