Todays Though > News > The Nets have a new motto, and it’s one word: ‘trust’ – Boston Herald
News

The Nets have a new motto, and it’s one word: ‘trust’ – Boston Herald 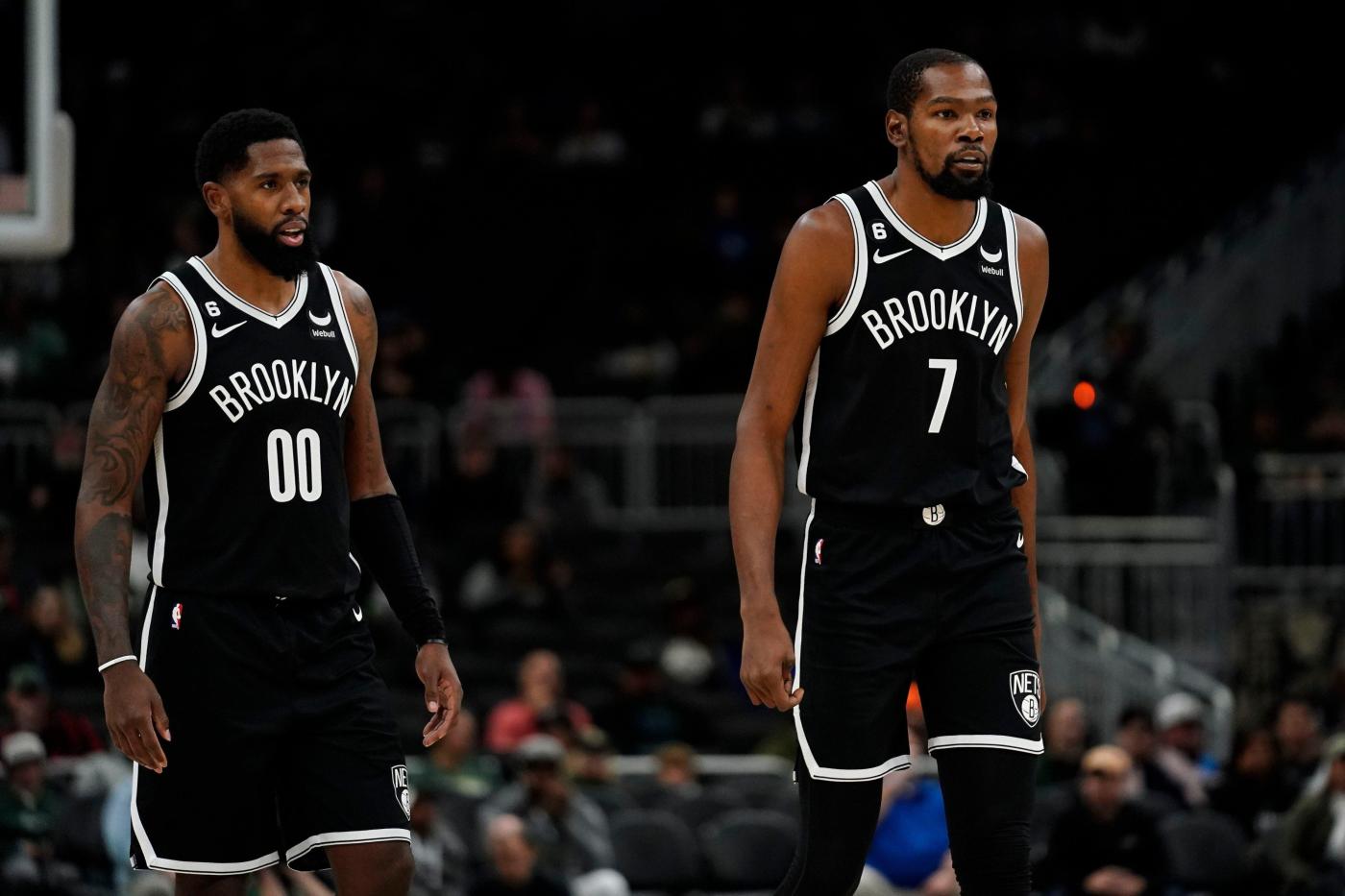 As Royce O’Neale spoke to a small group of reporters in front of his locker, Kyrie Irving shouted a word that’s become the Nets’ new catchphrase.

There had to be a lot of it if the Nets were going to win Friday night. There had to be trust when the Raptors’ flurrying defense got the ball out of Kevin Durant’s hands with the Nets up two with less than a minute to go in the fourth quarter.

Durant kicked the ball to O’Neale, and O’Neale gave it back. But like a game of hot potato, Durant gave it right back to O’Neale — only this time, O’Neale’s defender was further away from a career 39% shooter than he should have been.

Only this time, that potato stuck in O’Neale’s hands before he uncorked what would become the game-winning shot: a three from his favorite spot on the floor (the left wing) to put the Nets up by five while the Raptors used their final timeout.

O’Neale had missed five of his first six shots before letting that fateful shot fly, a shot that had he missed, the Raptors very well may have won Friday night’s matchup. Instead of losing their first two games of the season, the Nets hit their first road trip at .500.

“These guys trusting me, telling me to keep shooting,” O’Neale said postgame. “[Kevin Durant] had [an off] first half, and we told him to stick with it. He told us ‘thanks for believing in me,’ and that’s what we do to each other.”

The Nets’ first game of the season wasn’t just about testing the new-look offense against a historically vaunted Raptors’ defense. It wasn’t just about how Ben Simmons looked in his regular season game, nor was it about Joe Harris’ return from a sore foot.

The throughline for the entire 48-minute showdown was just that — trust. Trusting in Durant to deliver after he missed his first five shots. Trusting in Kyrie Irving to pick up the slack and captain the offense at times when both Simmons and Durant were on the bench.

The Nets trusted starting center Nic Claxton to go coast-to-coast off a defensive rebound, finishing with a euro-step around All-Star forward Pascal Siakam when he could have given the ball to either Irving or Patty Mills, who was ahead of him and calling for the ball.

“Coach trusts him,” Durant said after the game. “His teammates trust him so he can go out there and do his thing.”

There was even the trust factor between head coach Steve Nash and his star point guard, who picked up his fifth foul early into the fourth before Nash challenged the call. The challenge was ultimately successful. Not only did Irving not pick up his fifth, but officials reversed the call into an offensive foul on the Raptors.

“We have a lot of trust in our coaching staff, and they do a great job of watching film very quickly,” Irving said. “I think it was a good call. I felt like I didn’t foul, I got over the screen pretty fairly, honestly, but I think that could have gone a different way if I picked up my fifth with I think it was seven minutes left on the clock. It was a big play, a big turning point, and we got to set up our offensive possession next, and after that I felt like we had control of the game.”

The trust went across the board. Head coach Steve Nash put veteran forward Markieff Morris in the game until beyond the three-minute mark of the fourth quarter. He continued to trust O’Neale even though Harris, Brooklyn’s poster child and longtime starter, was available on the bench. And the easiest decision was to continue to trust Durant, who shook off his cold start and finished with 27 points on 8-of-18 shooting despite missing each of his first five shots.

“I’m thinking too much out there to start the game,” Durant said. “Just got to settle and that’s what I usually do after that first quarter.”

And if the Nets are going to win big this season, it’s going to be because they trust each other — maybe they even trust the process — enough to know that their talent can weather any storm an opposing team might pose. Simmons didn’t even know O’Neale was one-for-six before hitting the game-winner.

“That’s what trust is. Everybody’s capable of playing the game. Just trust. He did his job, he spaced the floor. Defensively he was incredible, but everyone has slow starts.”